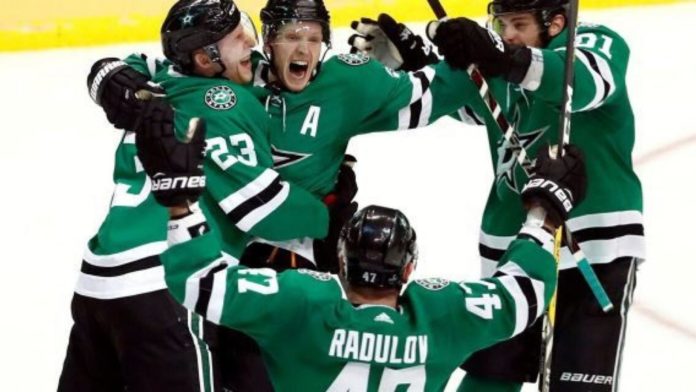 “Klingberg shoots…HE SCORRRRRRES, JOHN KLINGBERG SENDS THE STARS ONTO THE SECOND ROUND!!”

This was the call from Josh Bogorad and Daryl Reaugh, the TV voices of the Dallas Stars, as the Stars overcame the Nashville Predators 2-1 in overtime, keeping their Stanley Cup playoff hopes alive and well, as they move on to face the St. Louis Blues.

The Stars won Game 1 by one point with a score of 3-2, as they started the series out strong with an early victory. Goals were scored by Heiskanen, Radulov, and Zuccarello as Ben Bishop mostly held strong, as he allowed only two goals on 32 attempts.

The Stars lost Game 2 in a close game, with a final score of 1-2. Captain Jamie Benn scored the sole goal for the Stars as Bishop did his best to stop the barrage of shots, 42 in total.

The Stars lost Game 3 by one again, with a final score of 2-3. Seguin and Zuccarello scored for the Stars with assists by Radulov, Klingberg, and Benn. Bishop had a slightly off night, as he allowed 3 goals in out of 28 shots attempted.

The Stars triumphed by a landslide in Game 4, as despite having the lesser record in the series, they bounced back with a 5 goal victory. Two goals were scored by Hintz while Cogliano, Radulov, and Zuccarello each snagged a goal. Bishop had a phenomenal night, as he allowed only one goal on 35 attempts.

Coming off of a victory, the Stars didn’t let up as they won Game 5 by two, with a final score of 5-3. Radulov and Dickinson each scored twice, with Seguin also scoring as the Stars took a 3-2 lead. Bishop saved 33 out of 36, allowing three goals on the night.

With all the momentum in their favor and playing in the American Airlines Center, the Stars looked to close out the series on April 22nd in Game 6. It took overtime to get the job done, but the Stars won off a goal by Klingberg with 3 minutes left in the period off an amazing assist by Radulov. Comeau scored the other goal for the Stars, as Ben Bishop was lights out, allowing only one goal out of 48 attempts.

This season has been successful for the Stars already, but the most successful of seasons don’t end with playoffs wins, but rather the hoisting of the Stanley Cup. The Stars will face the St. Louis Blues, with Game 1 on Thursday the 25th, with puck drop at 8:30. With many of the Stars’ players catching fire at the right time, it will certainly lead to a highly contested series with the Blues.

Out of the DFW sports organizations, many tend to overlook the Stars, especially due to their underwhelming seasons in the past few years and the prominence of the Cowboys. This team, however, with a new head coach and a united team is certainly special, potentially translating to what could be a very successful campaign for the Stars. You’re not going to want to miss it, so tune in this Thursday.

Check back to The Roundup for more Stars and other sports news!