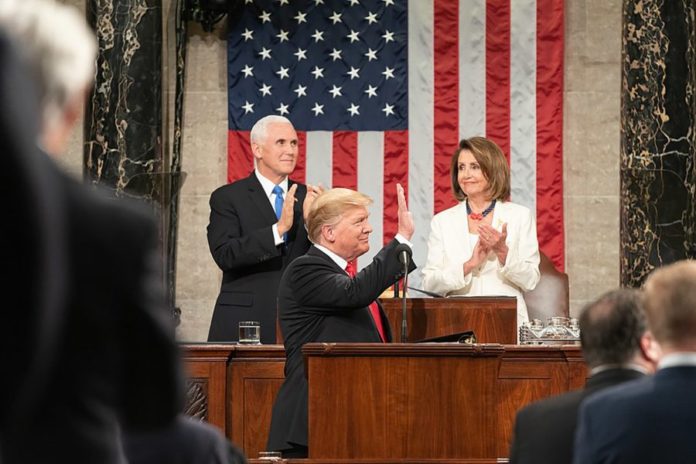 On February 5, 2019, President Donald J. Trump gave his second State of the Union speech. His speech was delivered not long after he and Congress came to a deal to end the government shutdown, which caused the event to be postponed from its earlier date. The President also stood in front of a divided Congress that looked much different than the Republican-controlled body he addressed one year ago. Behind him was House Speaker Nancy Pelosi, who led the chamber from 2007 to 2011 and now holds the gavel once again.

President Trump’s speech featured a diverse set of guests ranging from war heroes to astronauts to ICE agents. Most references to them elicited bipartisan applause. As is tradition, the President honored several Americans to celebrate their contributions to our country in a nonpartisan manner; the presence of other guests served more political purposes. The President also outlined his policy agenda for 2019 while reflecting on the past year of his administration

Trump began his speech with a plea for unity and finding common ground. Calling his agenda “not a Republican or Democrat[ic]” agenda, he made references to various issues he believes he can work with Congress to solve: job creation, fair trade, infrastructure, prescription drug reform, immigration reform, and a less internationalist foreign policy. While the President struggled to get parts of his agenda passed under unified Republican control, he now faces a much more hostile Congress, and any successful policy agenda for the next two years will need to be rooted in bipartisanship and shared values.

Trump then honored three World War II heroes as he reflected on the leadership of then-General Dwight D. Eisenhower. Veterans Joseph Reilly, Irving Locker, and Herman Zeitchik were among the many soldiers who fought for the United States on D-Day, commemorating the 75th anniversary of the occasion that will take place this June. He also recognized the 50th anniversary of the moon landing, joined by astronaut Buzz Aldrin of that very excursion.

Listing the several economic milestones that have been reached during the Trump presidency, he praised his own economic agenda. At this point in the speech, the President began to turn to embellishments to celebrate these political and economic victories. The “unprecedented economic boom” that Trump referenced was not just precedented, it was on par with 2014 levels of economic growth. He exaggerated the decline in food stamps recipients by 1.1 million, representing a decline in assistance by 3.9 million people rather than the 5 million he claimed had left the program. He claimed wage growth was at its “fastest pace in decades” despite only matching pre-recession benchmarks, indicating modest, typical growth levels.

The President made reference to the 2017 tax bill, the repeal of the Obamacare individual mandate, and various deregulation efforts. Calling his tax reform law relief for “working families,” he neglected to mention that the large majority of the cuts would go to the wealthiest Americans while working families would be left with a much smaller piece of the proverbial tax relief pie. He also praised the estate tax repeal as a win for small businesses and farmers, never mind that it only affected two-tenths of one percent of all people who die. The President then mentioned the bipartisan Right to Try Act that he signed into law, which eases access to certain cures for very ill people.

Some of the deregulatory efforts taken on by the President that he acclaimed included a repeal of clean water regulations, making American waterways more vulnerable to waste and pollution, and ending non-discrimination protections against car dealers, permitting them to charge higher interest rates on nonwhite customers.

Trump then directly attacked the various probes, investigations, and oversight exercises into his administration and campaign. He argued that “the only thing that can stop [economic prosperity] are foolish wars, politics, or ridiculous partisan investigations,” an apparent jab at the ongoing Russia investigation as well as House Democrats’ promises to make use of their new oversight powers.

The President again harped on themes of bipartisanship and cooperation to encourage the Senate to move quickly and confirm his appointees to various political and judicial slots. Ironically, while he bemoaned the pace of these confirmations as “unfair to the nominees and very unfair to our country,” the Senate confirmed a record number of judicial nominees in Trump’s first year in office, and that fast pace has continued. Appointments to political offices, however, are being confirmed more slowly.

Trump spoke of the passage of the First Step Act, a bipartisan criminal justice reform effort recently signed into law aimed at reducing the federal prison population. He introduced two of his guests, former federal inmates Alice Johnson, whose pardon was advocated for by Kim Kardashian and Kanye West, and Matthew Charles, a recently-freed former drug dealer who became a law clerk while attending college from prison. Unfortunately, these cases are the exception rather than the norm; Johnson is one of just eleven people pardoned by the President, a result of the Wests’ lobbying efforts, and Charles is rare among inmates in his access to higher education in prison.

Following these moments of bipartisan emotion, Trump turned to one of his favorite, and most divisive, topics: immigration. Lamenting the ongoing “border crisis,” he claimed that “large organized caravans are on the march to the United States,” and referred to the southern border as “lawless.” This part of his speech was the least true part yet. Crime in border cities such as El Paso and McAllen are down significantly as they are across the country. Tales of crime at the border are largely anecdotal and highly exaggerated, as most border towns on the American side are as safe or safer than other American cities. Trump also falsely referred to these migrants as “illegal immigrants.” The caravan claim is partly true, in that a band of less than 2,000 Central American refugees has arrived in the country. That said, these migrants entered at legal ports of entry to seek asylum and traveled through Mexico legally, with humanitarian visas. As for actual illegal border crossings, they are down nearly 80% since 2000 and the number has been flat for the past several years. Most “illegal immigrants” actually enter the US legally and then overstay their visa privileges.

Trump made several more points on the same theme of immigration. He asserted that immigration results in “reduced jobs” and “lower wages,” despite the overwhelming evidence that the net impact of immigration on wages and jobs is minimal. Additionally, he emphasized the supposed role of “lethal drugs that cross our border” in the opioid crisis, despite the fact that most illegal drugs that are imported into the United States go through legal ports of entry. He told the tragic story of a burglary and murder committed by an undocumented immigrant in Reno and welcomed the victims’ daughter and granddaughter as guests. While immigrants, both with and without legal status, do commit some crimes, their overall crime rates range from on par with, too far lower than that of the native-born population.

The most popular part of Trump’s speech was when he brought up the record number of women in the workforce and in Congress as well. It is true that a larger raw number of women are working today than ever before, but this is true of men as well; the relative share of women in the labor market is actually on the decline. In the current Congress, there are 127 women serving, a large jump from the 110 of the previous Congress. The number of women serving in Congress from the President’s own party has actually dropped, however, from 28 to 21.

Less controversially, Trump discussed his foreign policy vision and goals abroad. This included securing more defense spending from NATO allies, withdrawal from a nuclear treaty with Russia, peacemaking on the Korean Peninsula, support for disputed interim President Juan Guaido of Venezuela, and liberating much of Syria and Iraq from ISIS. He also defended his administration’s decision to move the US embassy in Israel to Jerusalem and withdrawal from the Iran nuclear deal.

As his speech came to an end, he first told the story of a guest of his who escaped the Holocaust only to be gunned down and survive, the attack on a Pittsburgh synagogue last October. He transitioned into describing the great accomplishments of “this magnificent republic,” including “our unrivaled progress towards equality and justice.”

Overall, Trump’s speech was clearly aimed at unifying a divided country and inviting the new Congress to come and work with him. Like most speeches he gives in front of a teleprompter, he stayed on message and remained coherent. He emphasized popular policy goals like prescription drugs and infrastructure but didn’t miss an opportunity to throw a bone to his conservative base. Even with this attempt at unity and transcending partisanship, the President still remains one of the least popular and most divisive presidents in American history. It remains to be seen if he will make good on his promise to push for these popular initiatives, but I contend it is unlikely that the hardened partisanship and polarization of this country will change anytime soon, regardless of how he delivers his speech.

To read the whole transcript of the speech click here.