When asked by reporters during the Clinton elections what was the biggest issue in every election he answered, “It’s the economy stupid.” This was the new campaign strategy of the Democratic Party and Clinton during the 1992 elections. 18 years later the Republican Party has taken on this slogan and is now asking, “What has Obama done to improve the economy?”

With his large stimulus package that has shown little progress, many American citizens feel that he has done very little to nothing to improve our economy. It is apparent with recent polls that many citizens are disgruntled with the Democratic Party. This November many Republicans feel that this is their time to take back the House and possibly even the Senate, and make a push toward the White house in 2012. The Democrats are projected to lose about 8 seats in the Senate and 38 seats in the House, a devastating loss that would essentially bring  a halt to President Obama’s plan for America’s future, i.e. the newly-passed healthcare option and stimulus recovery act. The GOP thinks it is their time now; they lost the Congress and the White House to the Democrats during the 2008 elections, but now it seems they will take back at least the House, possibly the Senate, and hopefully for them the White House in 2012.

The Democrats are now using a defensive strategy; very different from the offensive one they used attacking Republicans in the 2008 elections. Obama’s stimulus package has done very little to show major economic improvement in the short time he has been in office, which is contradictory to what the Democratic Party said, saying that such a plan would have immediate effects. But many Democrats say the best thing would be to wait and let the stimulus plans unfold before us over time. With many Democrats admitting that the first stimulus package was somewhat of a bad idea and was not carried out to the success as promised, they are promising that the new plan will be just what we need to get our economy rolling and that the American people need to stick with the course of action. President Obama’s approval rating has recently plummeted and has caused much turmoil among the Democrats, resulting in some Democrats up for elections bragging that they were not 100% behind Obama’s stimulus package and using it as a campaign platform. It is now up to the Democratic Party to stick firm to what they believe if they wish to have any chance of damage control during November’s elections.

This November’s elections are going to be monumental in our nation’s history. Immigration, homeland security, our education system, all these issues have fallen to the side and the only thing on the American people’s mind is the economy. With unemployment at 9.6% the people are looking for a government that will do whatever necessary to increase jobs and improve the economy.  The Republicans feel that lower taxes and little government involvement are the solutions; however, the Democrats are firm in their beliefs that government aid will help the United States get out of the worst economic crisis since the Great Depression. Either way the elections this November will be exciting to watch and see what steps our political system takes. 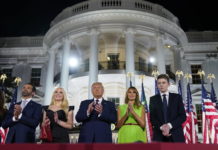 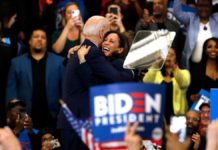