The day Hillary Clinton stated she was running for president will forever live in infamy. Hillary Clinton, also referred to as the Lady Macbeth of Arkansas, lied about the Benghazi scandal and continues to lie about her deleted emails. Also, she willingly defends Planned Parenthood, overused her power as the Secretary of State, and has a confusing voting record yet she still amazingly remains the Democratic party’s frontrunner. How is it that people still trust her? What good do people see in her? It seems that no matter what Hillary Clinton does, she and her far-left liberal cancer continue to spread amongst the states.

Even though Hillary Clinton is a very intelligent woman, she would not be a good leader because good leaders do not duck their heads and point fingers whenever a crisis arises. She has shown none of the requisite abilities to be the President of the United States, nonetheless a president of any country, during the numerous crisis’ and scandals that she has found herself in. She continues to lie, has convenient lapses of memory, “accidently” misspeaks or misunderstands questions, and covers it up by making it seem like her actions follow the correct procedures. Even if her policies made sense, she would be a selfish president because she aspires power through everything she does, even through her dysfunctional marriage with Bill Clinton, who has multiple rape and sex slave allegations under his belt.

Political elites from both parties need to start being held accountable for their actions; the Founding Fathers of the United States, who originally created a conservative government, would be disgusted if they saw the way Hillary Clinton acts nowadays. She continues to find herself in avoidable predicaments where she is has been caught lying. The worst part about all of these scandals is the fact that we will never know when they will end because they just keep on coming.

A great example of Hillary Clinton lying in order to gain power is when she claimed that she was nearly shot in Bosnia during her 2008 Presidential Campaign. Even though she claimed that she was almost shot after landing in Bosnia, there is video evidence of Hillary Clinton and her daughter getting off the plane in peace, without bullets coming her way. After being caught in a lie, Hillary Clinton admitted she made a mistake making this claim, saying, “So I made a mistake. That happens. It proves I’m human, which, you know, for some people, is a revelation.” This “misremembering” proves she would be more effective as an anchor on the NBC Nightly News than as the commander-in-chief. She continues to deliberately lie to the American public and not take accountability for her actions, knowing that she will get away with it.

Another example of a classic Hillary Clinton scandal comes from the time when she worked at the Rose Law Firm, witnesses claiming that she had files destroyed about land contracts of a close friend and business associate of the Clintons. After this Whitewater investigation took place, the man and his wife who were friends of the Clintons were imprisoned.

Furthermore, she recently took the liberty in trying to delete more than 32,000 emails from her server, 125 of them were redacted because they contained classified information, information not to be shared via email. These emails contained confidential information regarding matters of our military capabilities, operational tactics of security and had the potential to endanger our soldiers who are risking their lives for America.

Do you recognize the pattern?

Senator Clinton was willing to take this risk of endangering our fellow American troops while serving as Secretary of State, as long as she was not jeopardizing her personal well-being. At least two of her many emails that have been successfully recovered enclosed Top Secret/Sensitive Compartmented Information which is the highest level of classification, once again, endangering our troops by nonchalantly sending this information via an unsecured server from her house. 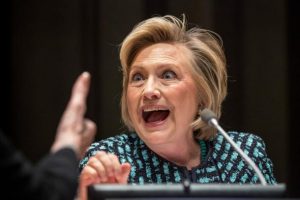 Like I’ve said before, a great leader knows how to be accountable for his or her own actions, but Hillary Clinton still maintains the position that she has never sent or received any classified materials. The way she thinks she is above the law is astonishing; even though there is cold hard proof, she continues to deny the allegations, mocking the seriousness of this situation and placing American lives in danger.

Not only was she using an unsecured server, but she was also sending these highly classified emails to her cronies who were not employed by the United States Government, meaning they lack security clearance and cannot be trusted with this information. The part that does not make sense is the fact that members of the military and intelligence communities have been punished for things far less severe than what Hillary Clinton has done, but it is okay because she is above the law, of course. Coincidentally, the Obama-appointed prosecutor happens to be a donor to Hillary Clinton’s presidential campaign.

The reason for this whole scandal begins with the fact that Hillary Clinton does not know how to properly lead,  because she has yet to take responsibility for her own actions. Always looking out for her best interest, she took the liberty in deleting all these emails and making sure that her reputation wouldn’t worsen (kind of seems impossible).

Regardless of her countless scandals, she would still not be a good candidate because of her lack of morals and sense. For example, Hillary Clinton has spent her whole life working to empower women, but one of her main donors to her family’s foundation, Saudi Arabia, continues to stone women in their country. Knowing how women are treated in Saudi Arabia, Hillary continues to do business and accept millions of dollars from this country. Additionally, she continues to campaign on the premise that taxes should be raised out of “fairness,” but only until those taxes impact her, feeling the need to come up with schemes to avoid problems that she is actually promoting. This is just one out of the many examples where Hillary Clinton continues to be a self-described, radical liberal who will do anything as long as she gets what she wants, more power and money.

Hillary Clinton said, “I consider myself a modern progressive, someone who believes strongly in individual rights and freedoms, who believes that we are better as a society when we’re working together and when we find ways to help those who may not have all the advantages in life get the tools they need to lead a more productive life for themselves and their family. So I consider myself a proud [emphasis on “proud’] modern American progressive, and I think that’s the kind of philosophy and practice that we need to bring back to American politics.”

This quote really makes sense, especially if being a “modern progressive” means being a compulsive liar, a poor leader with spotty judgment, and not having enough strength to take accountability for her own actions. Regardless if she is prosecuted, this whole episode should have every American actively trying to kick her out of the presidential campaign because it questions her judgment and her leadership skills.

The best thing to do at this point in time is for all of us Republicans, Democrats, men and women to come together, drawn by our mutual disrespect for Hillary Clinton, and let it be known that she and her pantsuit are neither worthy nor qualified for such a prestigious position in the United States.