The Roundup Your official source for all news, sports, and viewpoints of the students of Jesuit Dallas since 1942.
Home Featured Confirmation Hearing Day 1 – Judge Amy Coney Barrett 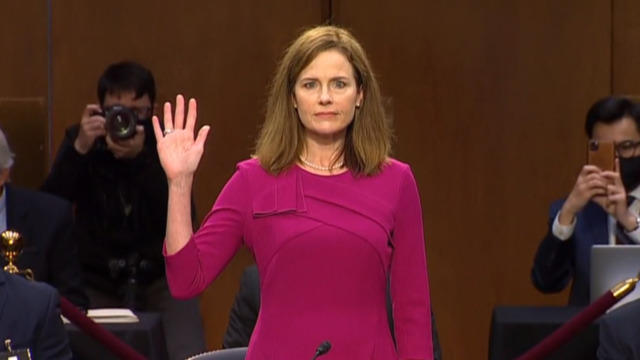 Senate Judiciary Committee Chairman Lindsey Graham announced that the hearing to consider the nomination of Judge Amy Coney Barrett to serve as an Associate Justice on the Supreme Court of the United States will begin October 12, 2020.

A slight majority of American voters oppose the Senate holding confirmation hearings for Barrett, though opposition has eased since Trump announced his choice to replace the late Justice Ruth Bader Ginsburg.

The national poll finds 44 percent of registered voters support the U.S. Senate holding the hearings and vote on Barrett’s nomination, while around 52 percent support filling this Supreme Court seat for the winner the presidential election and a Senate vote next year. Credit: judiciary.senate.gov

Judge Barret’s hearing will last three to four days, using the format the committee has followed for recent Supreme Court nominees. So, to reiterate the opening statements by Judiciary Committee members and the nominee will occur on Monday, October 12. The questioning of Judge Barrett will begin on Tuesday, October 13. Testimony by those who know Judge Barrett the best and legal experts is expected to follow.

Earlier in the day, senators clashed over the nominee. Democrats stuck to a tight script, telling personal stories about constituents who benefited from the Affordable Care Act and warning that Barrett’s ascendance to the high court could spell the end for the landmark health-care law.

Later, Republicans called on Democrats to focus on Barrett’s exceptional qualifications for the job, not how she might rule on key cases. As mentioned above, if confirmed, Barrett would replace the late Justice Ruth Bader Ginsburg, who died Sept. 18, 2020.

What you need to know:

Opening statements from members of the Senate Judiciary Committee and Barrett dominated the first day of confirmation hearings. Sen. Lindsey O. Graham, the committee chairman, will deliver remarks, followed by Sen. Dianne Feinstein, the top Democrat on the panel. Then the 20 other committee members will get 10 minutes for opening statements.

Barrett’s two home-state senators, Todd C. Young, and Mike Braun, will introduce her. This will be the second time Barrett has faced confirmation since 2017. Then the Senate had approved her for a federal appeals court position. She will then deliver her statement.

In a copy of her prepared statement obtained by The Washington Post, Barrett will echo the philosophy of her mentor, the late Justice Antonin Scalia, and tell the committee that the “courts are not designed to solve every problem or right every wrong in our public life…”

“The policy decisions and value judgments of government must be made by the political branches elected by and accountable to the people,” Barrett will say. “The public should not expect courts to do so, and courts should not try.”

Grassley invokes Ginsburg’s words to argue against her dying wish:

Sen. Charles E. Grassley, the former chairman of the Judiciary Committee, invoked Ginsburg’s 2016 eulogy for the late Justice Antonin Scalia to make the case that Senate Democrats should vote to confirm Barrett, despite their ideological differences with her.

“A good judge understands … it’s not his or her place to let policy, personal or moral principles dictate the outcome of a case,” he said, adding that Barrett “clearly reflects this standard.”

With coronavirus precautions in full effect, only a small number of congressional aides, photographers, reporters, and observers viewed the hearing in the Hart Senate Office meeting room.

It created an austere scene, comparable to previous hearings, including the raucous confirmation of Justice Brett M. Kavanaugh in 2018. The chamber was sparse, with chairs spaced out several feet, allowing attendees to maintain physical distance. Bottles of hand sanitizer and cleaning wipes were on the desks.

Unlike in past years, the public could not watch the proceedings in person because of the coronavirus pandemic. Demonstrators instead took their dissent to the entrances of Senate office buildings and the marble steps of the Supreme Court.

Biden says Barrett’s faith should not be an issue, that senators should focus on health care:

In a brief exchange with reporters Monday, Democratic presidential nominee Joe Biden said Barrett’s Catholic faith should not be an issue at her confirmation hearing and that senators should focus on the potential that she would derail the Affordable Care Act, echoing arguments of Democratic senators on the Judiciary Committee.

“No, faith should not be considered,” Biden told reporters before boarding his plane in Delaware en route to Florida. “No one’s faith should be questioned.”

Barrett introduces herself to the Judiciary Committee:

Barrett made her formal introduction before the Senate Judiciary Committee on Monday, pledging to be a justice who will apply the law “as written” and paying tribute to justices across the ideological spectrum who came before her: Justices Antonin Scalia, Sandra Day O’Connor, and Ginsburg.

Furthermore, she noted that Scalia believed that a judge must apply the law as written and not as he or she wishes. As for her female predecessors, Barrett praised O’Connor — the first woman to sit on the Supreme Court — as a “model of grace and dignity” and paid tribute to Ginsburg’s storied career.

“I have been nominated to fill Justice Ginsburg’s seat, but no one will ever take her place,” Barrett said. “I will be forever grateful for the path she marked and the life she led.”

She told the committee that a Supreme Court seat was “not a position I had sought out.” Also, she said she “thought carefully” before accepting the nomination. Senate documents show she accepted it Sept. 21, three days after Ginsburg’s death.

Barrett also nodded to her family, sitting behind her except for her youngest child, Benjamin, who is staying with friends.

Earlier Monday, Benjamin was calling out the names of his siblings as he saw them on television, Barrett said. “The confirmation process — and the work of serving on the court if I am confirmed — requires sacrifices, particularly from my family,” Barrett said. “I chose to accept the nomination because I believe deeply in the rule of law and the place of the Supreme Court in our nation.”

Ultimately, Judge Barrett flew through the first day with flying colors. We have to wait and see how the rest of the days go.

As this concludes the highlights of Day 1 of the Confirmation Hearings of Judge Barrett, I am sure looking forward to see what Day 2-4 of the Judicial hearing brings along.

For more coverage of politics stay tuned to The Roundup for more!