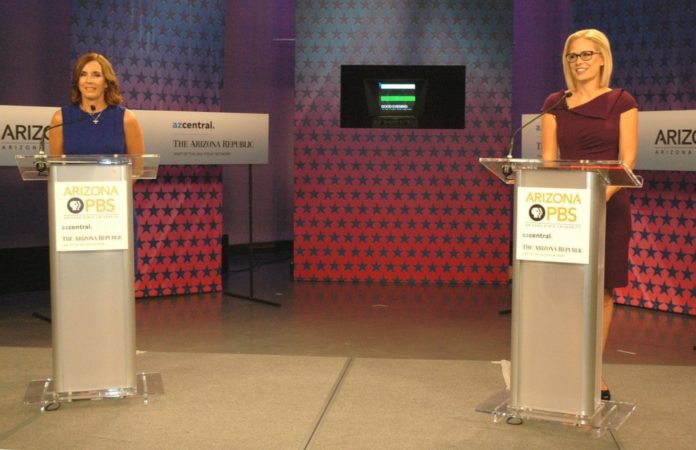 One of the closest races in the Senate this year in Arizona, where Democrat Kyrsten Sinema, and Republican Martha McSally are running to replace the seat of Jeff Flake.

Mr. Flake has felt much of the ire of the Republican base, as he has uttered the phrase “country over party” to justify his opposition to Trump. However, this has proved remarkably unpopular, as Trump is extremely popular amongst the Republican base. Thusly, he retired, and is not seeking re-election, leaving the seat to be open this year.

The Race has differed greatly from other senate elections, as both candidates would be defined as moderates, deciding to not take a more base-appeal approach as other candidates have. This reflects the politics of the state they are in, which are typically more centrist than the rest of the country. Former senator John McCain best embodies this, with the “Maverick” voting against the ObamaCare repeal late last year because he thought it was not a good bill. Arizona is very much a battleground state, with Trump only narrowly carrying the state in 2016

is in favor of cutting regulation and building infrastructure. In contrast to previous views she held, she is now a strong opponent of Islamic terrorism, passing legislation to cut off their funding. On education, she is in favor of increasing spending to improve students access to quality teaching. Instead of bashing Trump, she decided to adopt the tact of being a centrist, choosing to avoid discussing the sitting president. Mrs. Sinema is also openly bi-sexual, meaning that her victory would make her the first bi-sexual senator in American history.

Her opponent, Martha McSally is a retired army officer and current House of Representatives member from Arizona. Mrs. McSally has largely voted in line with Republicans throughout her tenure in Congress, and has voted to build a wall on the southern border. She is also in favor of increasing America’s national defense budget, and is in favor of interventionism in the Middle East. On the economy, McSally is in favor of trickle down economics as she voted for the tax cuts of 2017. While she may be more moderate than some in the Republican party, she is still a conservative on most issues, with the notable exception of not being anti-illegal immigrant.

In the last few weeks, Mrs. Sinema seems to have benefited from Democratic momentum throughout the country. She has taken a slim lead in aggregate polling, though it is still far too close to call. The race is pivotal to Democrat chances of taking the Senate because it is a Republican seat currently. If Republicans can hold on to the state however, they will almost certainly retain the Senate.