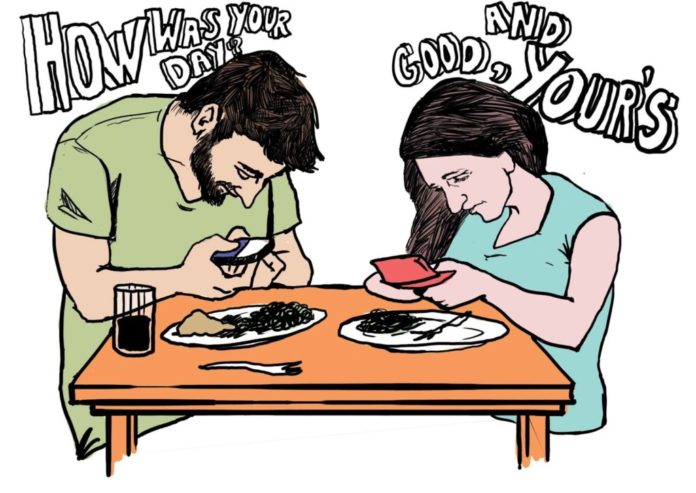 Your phone dings. A notification pops up. A Snapchat or a new Instagram post from your friend. You then check and like their post, or look at their profile, or do anything but leave social media.

Often, people scroll through their phones for hours harmlessly, without realizing the subliminal impacts of looking at social media. While social media unites people all across the world like never before, it also has detrimental physical and mental effects on humans, especially among teens. Young people can become almost obsessed with social media. Don’t believe me? Just take a look for yourself.

How does social media increase anxiety?

Being out of the loop makes us feel terrible because humans, as inherent biological creatures, tend to be social, and ever since the times of the caveman where being a part of a social group meant life or death, we still feel this effect. It is essentially a negative feedback loop. Furthermore, we tend to ask ourselves why we don’t look a certain way or why we aren’t taking vacations, for example.

And yet, most of the time, social media pages are, in essence, a highlight reel. Comparing our behind-the-scenes to their highlight reel, as described by Brenda Parnell’s TED Talk, creates feelings of insecurity and worthlessness, even though we know that it is not true.

We become so invested into someone’s page and forget we have our own life to live, specially given to us. We can make an impact in this world, and do things our own way and have fun, living a life of enjoyment beyond some social media page, and yet every second of our very own, precious life is spent scrolling mindlessly on someone’s page. Just think about it.

Does it have any other effects?

Have you ever, in an uncomfortable situation, decided to look at social media rather than talk to another living human being just like you? Has this person been an acquaintance or even a close friend? Well maybe reconsider your choice and actually have a conversation with them. To learn more, look at this article that explains some more negative effects of social media.

How do I stop this?

The best thing is always reflection. Think about how the last scroll made you feel, and think about how social media contributes to these thoughts in your head. Moreover, remember that your happiness is not determined by the amount of likes you get, how many friends you have on Instagram, or how many comments you get on a post. We can’t necessarily compare our lives to others, because it is not our life. Look at your achievements and accomplishments rather than your insecurities because each person has many great personality traits.

Also, Apple’s Screen Time and Android’s Digital Wellbeing programs are both available on many phones, and they seek to help users understand how much time is being spent on certain apps. Anyone can limit themselves to how much time they can spend on apps like Instagram, Snapchat, Twitter, or any other form of social media.

If social media interactions feel to be too much, then it might be time to take a break on social media. But, if I leave you with one thing, don’t worry about things that you can’t control and don’t compare yourself to others because you can’t control their lives and they are not on the same journey you are. It just leads to unnecessary stress and anxiety. Take your life one day at a time and look to get the best of each day.

Tune into The Roundup for more Jesuit news!