About 11 years ago, I walked with my grandfather through the Mercado (Mexican farmer’s market) trying to find a cucumber and an eggplant. That’s right, a cucumber and an eggplant. Let me explain this, my grandfather was a Japanese Buddhist and participated in Obon (お盆), essentially a Japanese “día de Los Muertos.” In this celebration, they place candles with paper vases in the river and make some toys that resemble horses (from the cucumber) and cows (from the eggplant) to represent the desire of seeing their departed familiars again. They would ride a fast horse to see them, then ride a slow cow on their way back to spend more time in the land of the living.

Most cultures have a special date in which they remember their deceased loved ones. In this article, I’m going to try to explain how “Día de Los Muertos” is celebrated in countries throughout Latin America.

As you all know, Día de Los Muertos is one of the biggest festivities in Mexico. Together with the Mexican Independence Day (not to be confused with “Cinco de May-o-my”), they make the two main holidays in every Mexican household.

The ancient Aztecs and Mayans celebrated the goddess of death at the ending of summer (August/September). In this celebration, native communities “helped” their departed familiars to go to the other side by singing and dancing. They also “fed” their loved ones with their favorite foods by grinding them into a mush that they would put near their resting place.

The arrival of the Spaniards to Latin America mixed this ritual with All Saint’s Eve (the original Halloween), making this traditional day into the sophisticated “Día de Los Muertos” that we know today.

Nowadays, Día de Los Muertos is celebrated with an “ofrenda,” an altar dedicated to your departed ones. Día the Los Muertos is such a big event that special food and flowers are put in the ofrendas:

Calaveritas: Sugar made skulls that represent “the lady of death,” this representation can also be seen in the modern “Catrina.”

Pan de Muerto: Special bread that was originally made with human ingredients. (y’all know, Aztec societies had some cannibal tastes…) This bread is supposed to represent the bones and body of the departed one. Now, it is obviously not made with human remains, and it is sold at almost any store from October until the end of November.

Cempasuchil: pronounced “cem-pa-zu-chi,” this flower is known in the rest of the world as the “Aztec marigold.” The original name comes from the Nahuatl language (the language of the Aztecs) who discovered the flowers in a lake that is now Mexico City. The bright orange color of this flower is supposed to guide the spirits to the ofrenda. 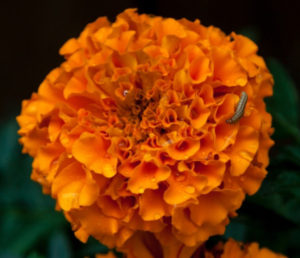 Very similar to Mexico’s due to the fact that the Mayans inhabited Belize, too.

Bolivia knowns their celebration as the “Dia de las ñatitas.” This festival originates from the Tiwanaku culture and was originally a ceremony to protect their cities from natural disasters by using the skulls of dead relatives. Now, it is celebrated with masses and by taking the ashes of the diseased ones to a family grave.

Know as “Finados,” people go to cemeteries and churches with flowers and candles to pay respect to their relatives.

Guatemala’s celebration is highlighted by the construction and flying of giant kites in addition to the traditional visits to grave sites of ancestors. A big event also is the consumption of fiambre, which is made only for this day during the year. 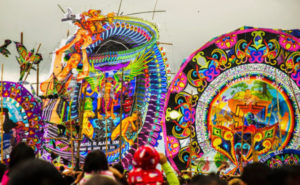 Even when the Día de Los Muertos has some importance in the main population, it is especially important to the Kichwa people (indigenous people who constitute 1/4 of the population). In Ecuador, they gather together in the community cemetery with offerings of food for a day-long remembrance. Typical foods consumed in this dates include colada morada (a special preparation of a native berry) and guagua de pan (a special type of bread).

In Perú, people gather in cemeteries to clean and decorate the graves. It is usually accompanied by music.

This type of celebration not only functions as a reminder that death is always around the corner but it also highlights the meaning of life and the importance of one’s legacy. Even though these celebrations have many names, figures, and traditions, each culture maintains a different way to honor their deceased loved ones.