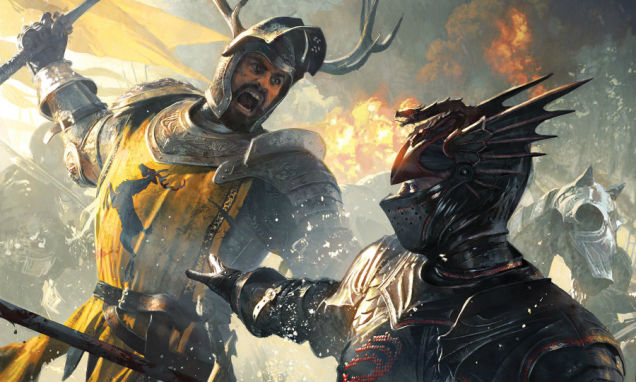 HBO’s Game of Thrones is the television adaption of George R. R. Martin’s book series A Song of Ice and Fire. This series is incredibly long and dense, so the show has had to cut some plot lines from it. Most of these plot lines were unimportant, but some of them dramatically change the story. This article will go over these plot lines hopefully to get fans to read (or listen) to the (audio) books.

The Tower of Joy

In the show, we learn about the Tower of Joy through Bran’s tree superpowers in season six. Ned Stark fights two King’s Guard, Ser Arthur Dayne, the sword of the morning, and another unnamed guard. The dialogue between them is short and uninteresting but after Ned and his group kill them, he finds his sister and her son in the tower. This leads to epic reveal that Jon Snow is the son of Lyanna Stark and Rhaegar Targaryen, which makes him Ned’s nephew and the heir to the throne.

In the books, there is more mystery surrounding these events. We learn about them in the first book through one of Ned’s fever dreams. Ned meets three notable King’s Guard. Ser Gerold Hightower, the white bull, Lord commander of the King’s Gaurd, Ser Arthur Dayne, the sword of the morning, and Ser Oswald Went stand between Ned and the tower. A conversation between them ensues, and right before the fighting begins, Ned wakes up.

However, because the show skipped over these key details, we cannot see this happen in it. You can listen to the audiobook version of the book’s passion here: https://www.youtube.com/watch?v=Nqv-UtJQk5Q

In the show, we all know now that Jon Snow’s real name is Aegon Targaryen and that he is the heir to the Iron Throne. In the books, this is all but confirmed. However, there is another person in the books who claims to be Rhaegar’s son. He lives across the narrow sea in Essos with a group that guards him and teaches him what it means to be a King. Jon Connington, the former Hand of the King and friend of Rhaegar, is in charge of this group and swears to not fail the young king like he failed his father.

They seek out the Golden Company, the mercenary group that Cersei hired at the end of Season 7 of the TV show, to help them reclaim the throne. However, there is speculation that he is not really Rhaegar’s son, but is, in fact, a Blackfyre, which was a bastard line branching from the Targaryen family and rebelled against the crown several times. This is a major change from the TV series that does not include him at all, and changes many of the ongoing plot lines, most significantly, Dorne’s.

Dorne was introduced in the show with fan favorite Oberyn Martell who sought revenge for the brutal murder of his sister and tragically failed. While this part remained faithful to the books, what ensued did not. The show cut the Dorne plotline dramatically short by killing the Prince of Dorne and having the Sand Snakes take over. In the books, The Prince of Dorne, Doran Martell, and his brother, Oberyn, plotted to overthrow Robert Baratheon and Cersei and reinstate Targaryen rule over Westeros.

Doran sought to marry his daughter to Viserion Targaryen, Daenerys’ brother who died in season one. When he found out Viserion died, he changed his mind to instead have his son marry Daenerys. His son traveled to Meereen to meet with Daenerys but was accidentally killed by her Dragons. Doran again adapted his plans and tries to marry his daughter to the other Aegon Targaryen (not Jon Snow). The Sand Snakes at first oppose him because they do not know about his plan. They are outraged because they think that he is doing nothing to avenge the death of their father, Oberyn. When they find out about his schemes, they join his cause instead of killing him.

There are many other plot lines that the show skipped you might be interested. In the books, Caitlyn Stark is resurrected by Thoros of Myr and leads to Brotherhood without Banners on a campaign of brutal revenge against the Freys as Lady Stoneheart. Stannis Baratheon might not sacrifice his daughter and is still alive and fighting the Boltons in the books. Sansa never marries Ramsey Bolton; instead, he marries a peasant he claims is Arya. Stannis captured Theon and his sister might execute him. There might be a grand Northern Conspiracy where the houses of the north rise up to support Aegon Targaryen (Jon Snow). In short, there are many interesting plots in the books that the show skips over that you do not want to miss, so read the books!