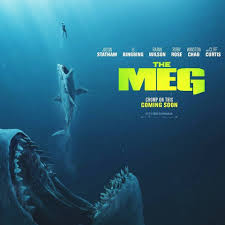 The Meg (6.1/10 IMDB) features diver extraordinaire Jonas Taylor (Jason Statham) and company in a fight for the fragile survival of world’s ecosystem when a prehistoric predator is released from its aquatic prison deep in the Pacific Ocean. Opening with a scene five years prior, Jonas makes the tough decision to leave two of his crew on board a sunken submarine when it is mysteriously crushed by an outside source at a depth where life is thought to not be present, forcing him into an early retirement at some Pacific bar. Flash forward 5 years, and suddenly he’s battling a prehistoric creature because a greedy billionaire and some scientists opened a thermal vent from the Ocean’s depths and released not one, but two big sharks on the world.

As an action movie fan, I was pretty disappointed with Statham’s performance. I think he’s great for the roles he plays in films like Lethal Weapon, the guys always moving, punching, driving way too fast, and, of course, shooting bad guys with absolutely no regard for pedestrians throughout the journey. In this film, however, I felt like they made him do some pretty ridiculous stunts that in turn made the whole movie feel a bit cheesy, like attempting to swim faster than the biggest shark ever known to man. That being said, when he does something heroic, he does it better than anyone else, leaving the audience astounded by the turn of events yet seeing it as entirely possible, partly because he just looks the part.

The next problem I had with the film was how convenient it was that Taylor’s ex-wife, an arch nemesis that forced him into retirement, and best friend were all working at the same Oceanic facility and he had little to no idea about it. It was a very cliche move that he only agrees to come and save the sunken sub after he hears his ex-wife is one of them, subsequently releasing the giant shark. However, his ex-wife is not his love interest in the film but one of her colleagues, who fills the gap even though they didn’t need to. This storyline felt crammed into the larger plot of the film, making it awkward in some scenes.

My last issue with the film is the Megladon’s themselves; the movie makes them out to be intelligent, all-powerful creatures of the sea only to swap them out with a dumb creature controlled only by the instinctual craving for a meal. After the crew places a tracker on the second Megladon, the shark somehow transfers it to a whale, knowing to still stay in the general vicinity for a meal. Also, the second shark just popped out of nowhere to EAT the first shark in an act of cannibalism that left me puzzled. Compare that intelligence to the same creature that –despite a meal sitting literally right above him in the form a massive beach party– goes off in search of fake whale sounds in the far off distance. The storyline just paints two pictures of the same shark that I had trouble understanding.

Given all it’s issues, the Meg isn’t a very special shark film even if it does feature the biggest shark of all time pitted against a man of Jason Statham’s stature. I personally wouldn’t give it more than a 5/10. Tackling a shark film is extremely difficult with the likes of Jaws to live up to, and this movie failed to impress in any regard.