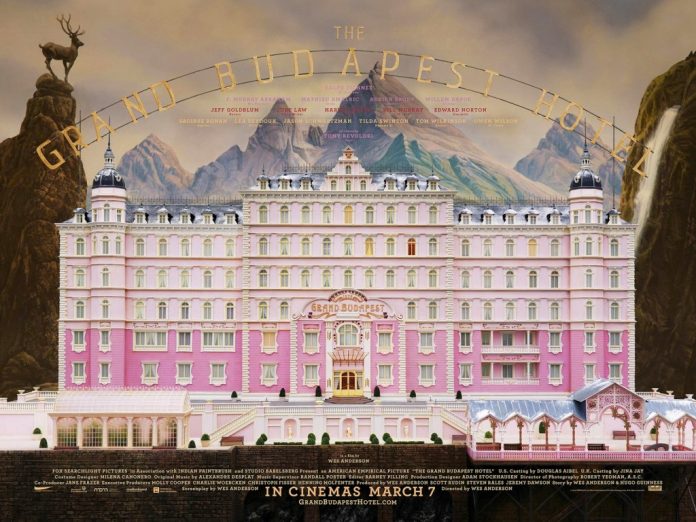 As it is not a major summer block-buster, The Grand Budapest Hotel may have flown under the radar for a great majority of people. In addition to this, from a glance, it may seem like a period drama if a person were not to look closely at it but, it is most certainly not. Anyone who has ever seen a Wes Anderson film knows exactly what they are in for with his latest work. “Fantastic Mr. Fox” is another, more common, example of Anderson’s specific style that you may recognize if you do not know him by name. This time around, however, his film is less family-friendly, combining quick witty humor with a crude and sometimes morbid form of comedy to create dialogue that is almost never predictable and extremely funny. That is not to say, though, that this movie is without its more somber parts.

As the movie opens, you will be taken back in time from present day all the way to the 1930’s, establishing context as you go along. It is a story within a story of sorts, and it is a fantastic way to give the viewer a retrospective look at the concept of time as the main story progresses. You are instilled with the subtle feeling that these events have already past, which slightly dulls the franticness of it all.

The film revolves around The Grand Budapest Hotel in the fictional “Republic of Zubrowka,” a country on the brink of war. In the surreal and almost quirky style that the hotel is presented in, Anderson utilized the antiquated art of models to create a hotel all of his own, which is presented tastefully in the wide landscape shots.

Present in the style of the models and throughout the movie as a whole, a vein of decadence presides which would commonly be associated with a sophisticated and aristocratic drama. However, it serves to contrast the style of humor that is the antithesis of anything closely relating to Downton Abbey, making the well placed expletives even more comical. It is this contrast and the “predestined” nature of the film that leaves me relaxed in my seat which is a relief from most of the action/suspense movies that keep me on edge. That is not to be misinterpreted, though, as the movie being dull.

Like I have previously touched on before, The Grand Budapest Hotel primarily acts a comedy and is one of the best that I have seen in a while. Is it a particularly sophisticated style of humor? Not really. It does, however, have impeccable timing and expertly crafted characters that make not a single joke fall flat. Mr. Gustave, the hotel’s concierge, stands as an example to how Anderson utilizes seemingly proper characters to deliver some of the best lines. Joining Gustave throughout the film is Zero, a new lobby boy that nails the “awkward/quiet type” trope right on the head but has a skillfully crafted progression throughout the movie. Despite the film being a comedy, the character progression and development of Gustave and Zero surpasses that of most other movies I have seen due to the fact that the actors create a very believable bond between the two that tugs at the heart strings. In general, the movie transitions between these more somber moments and the quick jokes quite quickly which can be a bit jarring. It is obvious that this was done on purpose but, in my opinion, it could have been smoothed out or transitioned a bit better. Despite this, the film did its overall job: it kept me thoroughly entertained and provoked thought throughout its entirety.

To me, a bad score can easily ruin a perfectly decent movie with a single foul note. Whether it be overly generic and simply gets stale after time or just plain repulsive due to a lack of budget, an inadequate soundtrack is unacceptable. The Grand Budapest Hotel, thankfully, suffers from none of these problems. It is able to distinguish itself from the crowd by planting roots in eastern European styles of music which is uncommon to say the least. Composed and performed by people whose names I dare not try to pronounce, a beautiful and unique score is sprinkled throughout the movie giving the whole production a unified feeling. Most of the tracks have an overall jaunty tone to them which compliments the humor of the not-so-serious characters. There will probably not be a singular song that will get stuck in your head, but in the moment, all the tracks perfectly pair with the current scene so that both it and the acting shine through.

*Note: In my reviewing scale, a 5/10 means the film was completely average in every way, neither good nor bad.