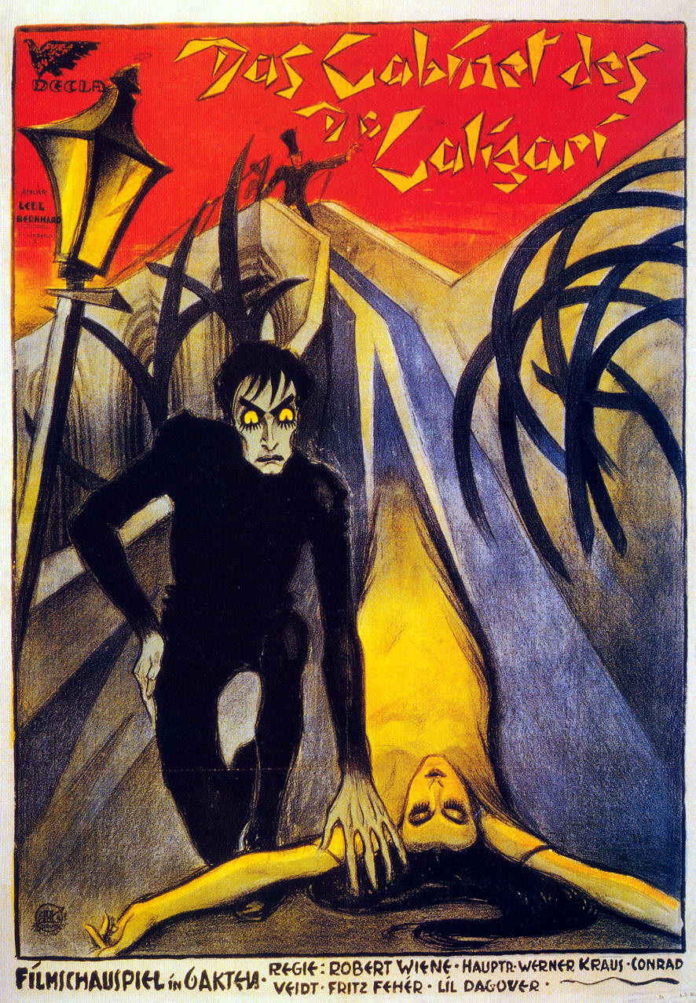 The Cabinet of Dr. Caligari (1920) is a silent German expressionist film released on February 26, 1920. Directed by Robert Wiene, written by Carl Mayer and Hans Janowitz, and starring actors Warner Krauss, Conrad Veidt, and Friedrich Fehér, the film was called “the first true horror film” by Roger Ebert and has worked its way into film history. Its style has influenced the works of countless films like Nosferatu (1922), Metropolis (1927), M (1931), and the films of Universal’s horror catalog. Its influence can be seen in the visual style of directors like Tim Burton and in films of “Film Noir”.

The film begins with our hero, Francis, talking to an older man on a bench in what can be assumed to be a park. The older man tells him of the spirits that haunt him. Francis then tells him of a much more troubling tale that he, his friend Alan, and Jane experienced. This tale follows Caligari and his somnambulist, Cesare, as Caligari uses Cesare to commit murder. The film takes odd twists and turns along its way, with a visual style that evokes anxiety and fear. The audience experiences this anxiety and fear in one scene featuring the director of the insane asylum becoming Caligari. As the name Caligari surrounds the frame, the audience witnesses the finest acting from Werner Krauss. This scene has played in my mind as the epitome of insanity on celluloid.

The film’s colorful cinematography and set design evoke a fantastical or distant reality. Nosferatu (1922) uses similar framing to The Cabinet of Dr. Caligari (1920) to evoke fear and discomfort. (The famous silhouette shot from Nosferatu (1922) can also be seen in The Cabinet of Dr. Caligari (1920).) The film ends with an odd and contemplative ending, and this idea breaches out of the Surrealist genre and extends into even mainstream work. Films like 2001: A Space Odyssey (1968), Inception (2010), and The Shining (1980) all have endings that force the audience to think twice about what they just saw, then leading to multiple theories, interpretations, and ideas. However, the films that were impacted the most by The Cabinet of Dr. Caligari (1920) were “Film Noir” films. These films had dynamic and unique cinematography, accompanied by interpretive stories and themes of evil. This influence in the “Film Noir” genre is partially due to German filmmaker, Fritz Lang. Lang’s work included Metropolis (1927) and M (1931), two films famous for their ideas and camerawork. The film’s influence spans over multiple works in cinema and it remains one of the most important works in cinematic history.

Influence in Other Regards

Due to its time of release and Germany’s history, many people interpret The Cabinet of Dr. Caligari (1920) as an allegory for German society, specifically Nazism. In 1947 the book From Caligari to Hitler was released. It was written by Siegfried Kracauer and it focuses on the allegory of The Cabinet of Dr. Caligari (1920) and its themes of evil and tyranny. Kracauer relates Caligari’s ability to hide evil and convince others he is sane, similar to Hitler’s ability to hide his evil in the eyes of the German people. While I’m not sure if Mayer and Janowitz were thinking about Adolf Hitler when they wrote the script, the ideas of evil and hierarchy are themes that can be seen throughout the film. Caligari uses Cesare to do his evil bidding, and multiple shots feature characters towering over others.

The Cabinet of Dr. Caligari (1920) remains an important piece in cinema, illustrating the ability for artists to create a film “against the grain” and with subtext about the society within which the artists live. On first viewing, I recognized the importance and significance of the film and its place in film history, but on second viewing it became an enthralling experience that stayed with me long after the final frame. Because of its impact, ideas, and overall mastery, I give The Cabinet of Dr. Caligari (1920) an A+.