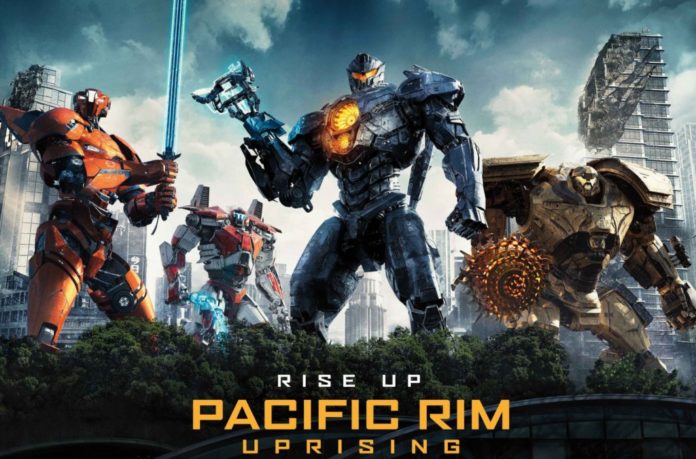 I saw Pacific Rim Uprising since I enjoyed the original and it was a chance to hang out with my friends on a Friday night. I went in with high hopes and got what I wanted, but just that. Nothing more.

Uprising excells in three aspects: the fights, the visuals, and the acting.

The best parts of this movie are, of course, the action sequences. Who doesn’t love giant robots taking on monsters to save the world?

One fight stands out in particular stands above the other two big fights: Gypsy Avenger, John Boyega and Scott Eastwood’s Jaeger, versus Obsidian Fury, a rouge Jaeger that beat Gypsy Avenger when it first showed up in Sydney, Australia. This rematch is the second major fight in the film. It takes place on an abandoned island off the coast of Siberia, and the visuals are phenomenal. The two Jaegers squaring off on the icy landscape is a sight to behold.

Another aspect in which Pacific Rim Uprising excels is the visuals, specifically the CGI, which influenced a large portion of the film. Only one physical set stands out in my mind, the interior of a decommissioned Jaeger.

The set is filled with tubing and twisting hallways, which lends itself to a fun little chase/fight scene between Boyega’s Pentecost and three unnamed criminals.

The CGI is where the movie truly shows its visual prowess. It does a beautiful job of blending CG and real sets. The Jaegers all look phenomenal, as do the new Kaiju, complete with glowing blue details.

The acting is what really sets this movie apart from other similar sci-fi action movies, like Michael Bay’s Transformers franchise.

Boyega plays Pentecost as someone who doesn’t care about the Jaeger Program and just wants to go home.

Eastwood plays a long-time Jaeger pilot, who grew up in the military, and he does this very well. He and Boyega play together very well and drive the movie.

The collection of child actors, who make up a group of cadets also have both charisma and a chemistry between themselves and the other actors.

Pacific Rim Uprising fails in two key areas: the plot and the pacing.

The plot isn’t all bad, just the ending. Up until the very end of the final battle, I really enjoyed the plot. It was simple enough and had a fantastic twist (which I won’t reveal to avoid spoilers). However, just when all seems lost and the stakes are at their highest, the heroes are saved in the silliest way possible (which I again won’t reveal for the sake of spoilers).

The biggest issue with Uprising is its pacing. Uprising has too much plot to get through in too little time. I was left wanting more than three big action sequences. The movie instead focused on the characters, which is not an issue, but it handled it poorly.

Whenever characters were set up to have a struggle, it was skipped over whenever they had to hop in a Jaeger to beat up some Kaiju or a rogue Jaeger. This wouldn’t have been an issue if the movie had chosen to focus on the action sequences instead of the characters. To fix this, however, the movie would have to be significantly longer, ruining its perfect runtime. So the biggest issue with the movie can’t be fixed without damaging other aspects.

All in all, Pacific Rim Uprising is a fun movie with good action, phenomenal visuals, and great acting that suffers from a disappointing ending and poor pacing. If you’re undecided on whether or no to see it, see it. It’s a good way to spend a couple hours, but be aware that the story isn’t the best one in cinematic history.