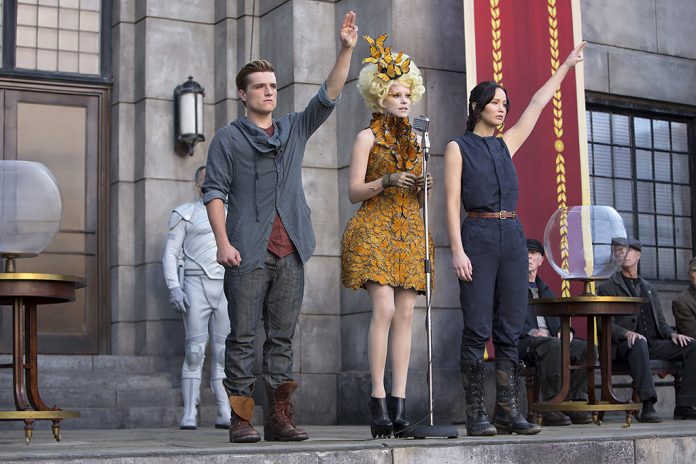 Synopsis: In a dystopian future, teens are forced into an arena to fight to the death in order to portray the control the government has over the lower classes. This sequel to the first Hunger Games begins by showing the aftermath of the last bloodbath and how the winners, Katniss Everdeen (Jennifer Lawrence) and Peeta Melark (Josh Hutcherson), have been dealing with their fame. Reports of revolution and violence begin to surface. This resistance is attributed to the daring show of defiance by Katniss and Peeta to the Capitol, a totalitarian government. In an attempt to stop the revolution, the head members of the Capitol decide to bring Katniss and Peeta back into the games. This act ends up backfiring, further empowering the revolution rather than stomping it out.

Story: 9/10. Even though it begins choppily and could confuse a viewer who has never read the novels, the story line was solid overall. There is no reintroduction of the characters or the love triangle that was so prominent in the last movie. The serious, violent nature of the Hunger games has afflicted Katniss with a sort of PTSD from the previous competition. This greatly adds to the plot because it creates many tense, nightmare fueled moments and portrays a key weakness in an otherwise stoic character. The revolution movement adopts the symbol of the mockingjay, a fictitious bird, that  Katniss wears as her symbol of strength.  Katniss encounters the revolution and its symbol while visiting District 11. The apparent link between the revolution and Katniss drives the evil president Snow(Donald Sutherland) to pay her a visit and bring her back into the nightmarish games. The directors do a very good job defining characters with the little time that they have and every death in the games is emotionally effective. The movie stays true to the ending of the book and it is a very dramatic one.

Cinematography: 8/10. The Hunger Games movies have always used a hand-held camera filming technique to give the film a more realistic and chaotic feel, like the games themselves. At first this is very annoying because there is not much happening on screen but the camera sways all over the place. As the action picks up, this camera style turns into a cool effect. The more serious and tense scenes have a darker shade to them, which adds to the movie’s solemn atmosphere.

Sound: 10/10. Catching Fire boasts a lengthy soundtrack at 12  songs. Many of  these songs come from underground artists such as Of Monsters And Men with “Silhouettes” and the up and coming R&B singer The Weeknd with “Devil May Cry.” From the first scene, the melodic orchestral music carries the film, swelling at moments of tension and accompanying the romantic scenes with lofty highs. The sound design for the movie is spot on and truly sets the mood for the entire film.

Overall: 27/30. The Hunger Games: Catching Fire proves that books can be transformed into fantastic movies. I highly recommend it to anyone who is a fan of the series or wants to take a trip into a dystopian future.