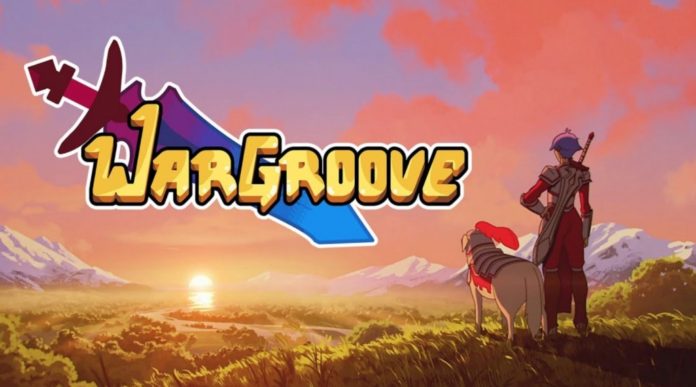 Wargroove, a spiritual successor to the Advance Wars series, grabs your attention with an upbeat, lighthearted story and an easy-to-learn-but-hard-to-master gameplay. Ultimately, however, the game does not do enough to separate itself from the Advance Wars formula to be worth buying.

Wargroove was released on February 1, 2019 by Chucklefish, an independent games developer and publisher based in London. The game is one I had greatly anticipated, both because I am a fan of tactical turn-based strategy games and because I have enjoyed Chuckefish’s other projects. As expected, the gameplay is reminiscent of the forefathers it emulates, with its major distinguishing feature being Wargroove’s addition of a “critical hit” system. This system allows the player to be more effective by causing his units to fight under certain specific conditions, such as a Pikeman fighting while adjacent to another Pikeman or a trebuchet firing upon an enemy at maximum range. These critical hits add flavor to the battles, but eventually you learn to incorporate these tactics into your general gameplay strategy, ultimately encouraging repetitious gameplay rather than enticing any novel approach. For example, Pikemen are always most effective in groups of three or four, and trebuchets become unassailable with air support and light infantry to hold a chokepoint inside the trebuchet’s critical range, so critical hits become easy to obtain, and the player then has no incentive to continue to be creative. 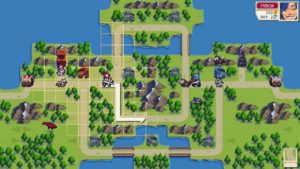 The unit design of Wargroove is fairly standard considering the game’s ideological lineage. Like in Advance Wars, each unit fills a specific niche, and you can only produce one unit per turn in each of your barracks, towers and ports, meaning that you must always make critical decisions regarding production even in the late game when the gold to buy units is less of an issue. Do I buy a cheaper and more cost-effective unit, or do I buy an expensive unit in order to put more of my gold to work? Each unit having a niche also means that no matter how big an army is, it cannot possibly deal with every threat. This system would be fantastic, but unfortunately the alchemist makes it all moot.

The alchemist has a middling price, moves faster and deals more damage than any other town-capturing units, fights effectively against air units, earns a critical hit when on terrain with a high defense boost, and possesses a healing ability that, for a small cost, has the potential to provide greater value for your gold than buying another unit of the type you are healing. The combination of these abilities means the alchemist can fill almost any role in the game, making the alchemist always an astute choice as long as you have the gold to afford one. If you need shock troops to clear an enemy’s defenses and take a town by themselves, the alchemist can do that. If you need a unit that can both protect your heavy units from aerial threats and heal them without returning to a friendly town, the alchemist can do that. If you want to remove a cluster of enemies camping in the mountains, the alchemist can do that too. These varied roles could be accomplished by specialized units, of course, but the alchemist’s ability to manage all of them makes the alchemist a unit with many strengths and few weaknesses, leaving me to wonder why Wargroove’s designers would afford the alchemist so much potency. Even more confusing is the fact that the alchemist’s healing ability includes one of the only ways a player can spend gold outside of the barracks’ one-unit-per-turn limit, further increasing the alchemist’s already prodigious value. 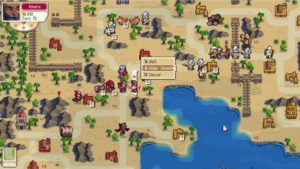 Several unique elements make Wargroove fun to play and help to counter the unbalanced power of the alchemist. First, Wargroove’s maps encourage aggressive play and force the player to fight on multiple fronts, meaning you are always losing on at least one front and winning on at least one other. The game also employs special mechanics like fog of war, which requires ranged and aerial units to be supported by spotters, and weather, which changes the range, damage and movement speed of your ground, air, and naval units respectively. These unique mechanics help mitigate the main problem of most strategy games, where one side is clearly winning and the other might as well concede as soon as it loses the upper hand, although Wargroove is not foolproof in this respect because matches are still sometimes decided entirely by who wins on the first turn units meet in combat.

I have other smaller gripes about Wargroove, such as a lack of hotkeys which results in many turns being a slog as the player has to click on a unit, click on a space to move to, click to confirm the move, and finally watch the unit move. Also annoying is the fact that in a one-player game the AI in the campaign never gets smarter, the computer instead starting with a bigger advantage in the game’s later levels. Finally, the lack of an automatic end turn when all of your units have moved constitutes a vexing and unnecessary irritant.

None of these aggravations constitutes a dealbreaker, however, and Wargroove capitalizes on the basic Advance Wars formula like no other current game, especially with its modern additions like online matchmaking. Even so, nothing about Wargroove is entirely compelling. I found the game greatly enjoyable for the several hours I spent on the campaign over the first couple of weeks I owned the game, and then I added a few online matches when the campaign started to bore me, but ultimately Wargroove leaves me feeling good, but never great. Your enjoyment of Wargroove will depend on how much you are engaged by its core gameplay. Unless you know that you love this type of game and want Advance Wars with modern pixel graphics and online matchmaking, then my advice is to skip Wargroove altogether and instead just download a rom of one of the Advance Wars games for free, or buy one of the other Chucklefish games, most of which are excellent.