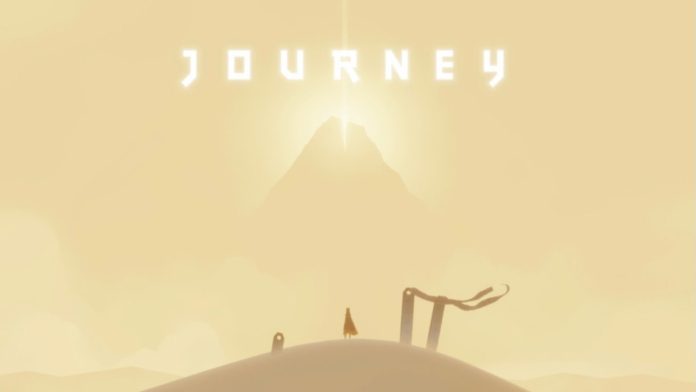 Lots of adjectives describe Journey, the 2012 walking simulator game from Los Angeles’ thatgamecompany. Journey is brilliant, captivating, beautiful, breathtaking even. But more than anything else, Journey is unexpected. Unexpected in that its soundtrack was nominated for a Grammy, the first video game nominated in the storied history of the prestigious Recording Academy, and unexpected that Journey would spark a new sub-genre of video games, inspiring successors and copycats such as The Witness and ABZÛ. And certainly unexpected is that Journey is art more than it is game.

The purpose of Journey is to convey an emotional experience entirely through environments and music. The game opens with a shot of a bright light, moving at high speed over a seemingly endless desert, as the camera pans to reveal your player character. You are then given control of your player, but the game gives no direction as to who you are or where you should go, the only landmark in sight a waving piece of cloth affixed to a strange stone marker on a faraway hill. As you walk towards the hill, your character slows as the incline increases, and the music builds to the dramatic reveal of the Mountain. This opening conveys the end goal of the game wordlessly and mentally prepares you to be guided through an environment as expansive as it is beautiful.

The most unique element of Journey is the player character, the Traveler. The Traveler is a semi-human entity with a long cloak and no arms, perfect to emphasize the game’s focus on navigating an expansive world rather than interacting with it. In addition to walking, the Traveler’s only other abilities are a chirping sound, produced by pressing the circle (PS) or B (XBOX) button, and a very limited form of flight, done by holding down the X (PS) or A (XBOX) button, and these two abilities form the core of the game’s action, allowing the player to focus on experiencing the world around him.

The real genius of the game stems from the Traveler’s flight ability. As you take your first steps towards the impossibly distant Mountain, you walk slowly and can only speed up by sliding down dunes. The exception to this comes after you encounter a flock of drifting scraps of cloth, who give you the scarf that functions as your flight meter. The scarf serves three functions at once. Most importantly, flying is much faster than walking, so planning your route through an area to minimize time spent walking forces you to pay attention to your surroundings at all times. In addition, the cloth creatures recharge your scarf when you chirp at them and function as landmarks that are the primary way the developers guide you through the landscape without physically blocking you from wandering off. Finally, hidden glowing sigils that make your scarf longer serve as rewards for exploring the landscape. 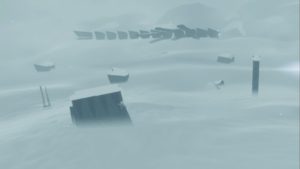 Another of the defining features of Journey is the unique multiplayer system, where you will occasionally encounter another player in the world. Unlike most other video games, you have no method of interacting with this companion, and they are not identified by username or gamertag in any way. However, standing next to a companion will recharge both of your scarves, and this single mechanic transforms Journey’s simple systems into a powerful emotional experience. Having a constant source of flight encourages both players to stick together as they scavenge for sigils, so when they find one, it feels like something they have discovered together. 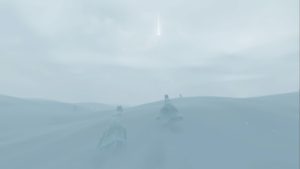 The most important purpose of both the scarf and the companion, though, is only revealed when they are taken away. Later in the game you will encounter enemies whose purpose is not to kill you but to tear away a piece of your scarf, making you slower and, in doing so, making you feel weaker, as the scarf you carefully hunted for sigils to grow is so easily taken away. This is taken to the extreme as you near the peak of the Mountain, where the bitter cold will constantly drain you scarf’s charge, the harsh wind pushing you back unless you take shelter behind rocks and in caves, and your companion will stop charging your scarf. Journey turns its laid back exploration gameplay into an experience that feels like the environment is fighting against you, and makes you feel weak without really affecting your basic capabilities at all.

The whole package is tied together with an adaptive soundtrack that was revolutionary in 2012, as it helps the sound of each scene flow into the next based on the player’s rate of progression, which together with the visuals and gameplay manages to tell a complete story with just the tone of each scene.

On my Cold Stone Creamery inspired rating scale, I give Journey