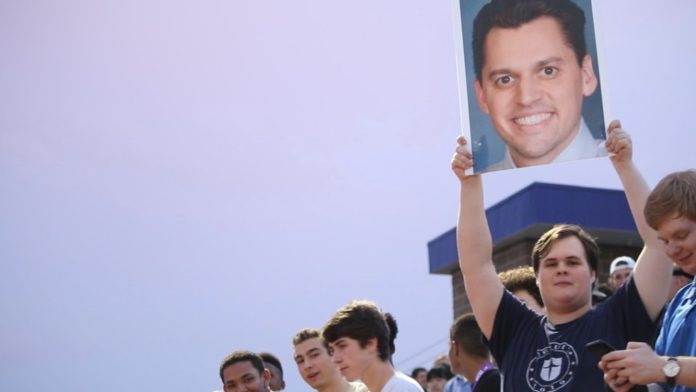 If you went to the football game last Friday, you might have noticed an interesting face in the student section. What was peculiar was that it was a face without a body, nicknamed the Dion Scion (Dye-on Sigh-on).

Inspired by seeing another student in the Jesuit side of the stands at the first football game against DeSoto, Allison began his quest to create the sign of Mr. Dion’s face.

When asked why he did it, Allison said “Honestly, I just did it because it sounded funny. I mean, what’s not to love about a giant sign of the new assistant principal’s face?”

“On Wednesday I had a friend who was in the yearbook at my service site and I asked if he could get me a high-resolution image of [Mr.] Dion’s face, and he said he could, so that night he emailed it to me. Wednesday night, I got on the FedEx website and I ordered the sign. And picked it up Thursday after school after our meeting with the BearFacts. I had decided to get some tongs to go with it on Friday so I grabbed those from the Lowe’s down the street on Friday after rehearsal.”

“Bringing it out into the student section was amazing. I walked out and held it up, and everyone cheered. I loved it. It was everything I was the reaction I was hoping for from a forty dollar joke. However, I’m kinda sad Mr. Dion wasn’t there to see it. Garrison loved it, though.”

When asked about future plans, Allison stated “I might do something new for the game on the 28th and something big at our last home game. Keep an eye out. I’m posting about future plans on my Instagram (@ruallison), so check there for more info on it.”

Mr. Dion felt honored in response to the sign.