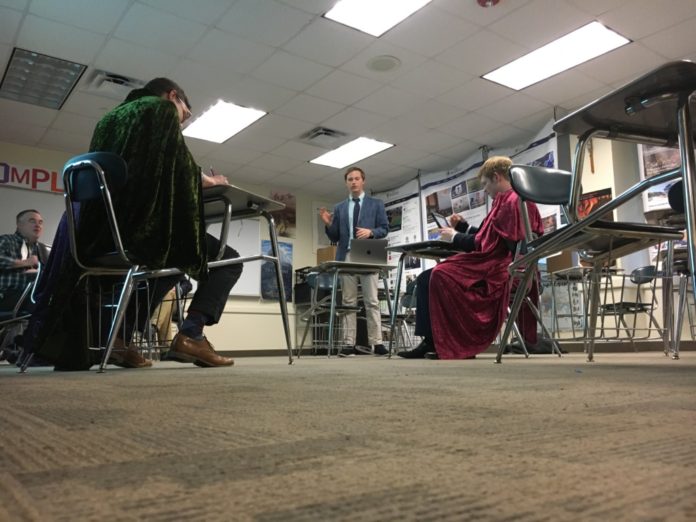 Thursday marked the opening of the first-ever Bountiful Scholars Tournament, sponsored by The Roundup. According to the advertisement that was sent out for the tournament earlier this semester, “the tournament seeks to showcase the wit and literary interpretative powers of the contestants.”

For this first round, scholars must analyze Dr. Seuss’ “Green Eggs and Ham” and debate its meaning in front of two judges, Mr. Chris Patterson ’08 and Mr. Ian Berry ’07, notable English teachers and decorated bountiful scholars in their own right.

On Thursday, Patterson and Berry crowned junior Carl Quist the winner of the first match of the first round of the tournament. He defeated senior Jake Hubbell.

Scholars have three chances apiece to talk during a match. They alternate, and each delivers a three-minute opening statement, a two-minute rebuttal and then a one-minute final statement.

Quist was the first to speak. His central argument was that the two characters represent the two competing natures of the same person. Sam represents this person’s communal, natural side while the unnamed character is more individualistic and rejects nature.

“The story is itself a dialectic consisting of the thesis of Sam and the antithesis of the other character and this dialectic is moderated by the green eggs and ham,” explained Quist.

His opponent, Hubbell, interpreted the story much differently. For Hubbell, “Green Eggs and Ham” is an indictment of the failings of communism. Sam forces green eggs and ham down the throat of the unnamed character, who can’t express his individuality and freedom. He eventually conforms to Sam’s demands.

Hubbell scored an especially salient point in his rebuttal when he said that the unnamed character does not have a name because he has no power in the story and is denied agency.

This elicited some “Ooooo’s” from the audience and nods from the judges. Still, it was Quist who won in the end.

Said Justice Berry while delivering the decision, “We noticed a more deft and agile use of [bountiful scholarship from Quist] to make the argument.” For Patterson, the concessions Hubbell gave Quist over the course of the debate sealed his fate.

Listen to the judges’ full remarks:

Quist was happy with his win. “I think I did okay. Obviously, it’s been a long day. I’m here operating with several injuries as you can see…emotional and physical,” he explained, pointing to his brace.

“Carl’s a very mighty opponent. He brought out things I didn’t think anyone would play,” said Hubbell. “I think this should have been a 1-2 matchup, maybe a final round. I definitely think this was the poor placing of seeding by the commissioner.”

He brought up a controversy that has embroiled the Bountiful Scholars Tournament in its inaugural year. Commissioner Giovanni Rivas ’18 chose to give those who signed up first a bye in the first round, frustrating many of the other scholars.

“The whole concept of a bye is to have some sort of incentive.” Rivas said, as he attempted to defend his decision. “The only way to really give an incentive, in this case, was to incentivize those who signed up first, and that’s what we decided to do.”

However, this was not advertised on the sign-up form. Rivas called it “an executive decision.”

Still, it was a successful first match, and Rivas is optimistic about how the rest of the tournament will play out.

The next match will be held at The Roundup’s weekly staff meeting, directly after school on Tuesday in B107.

Update Feb. 26, 2018: In the original version of this article I said that I would face Jacob Berg ’18 in the next match of the tournament on Feb. 27. Berg has since forfeited, and I am moving on to the second round. Josh Lewis ’19, who was set to face Brad Kucera ’18, has also forfeited.