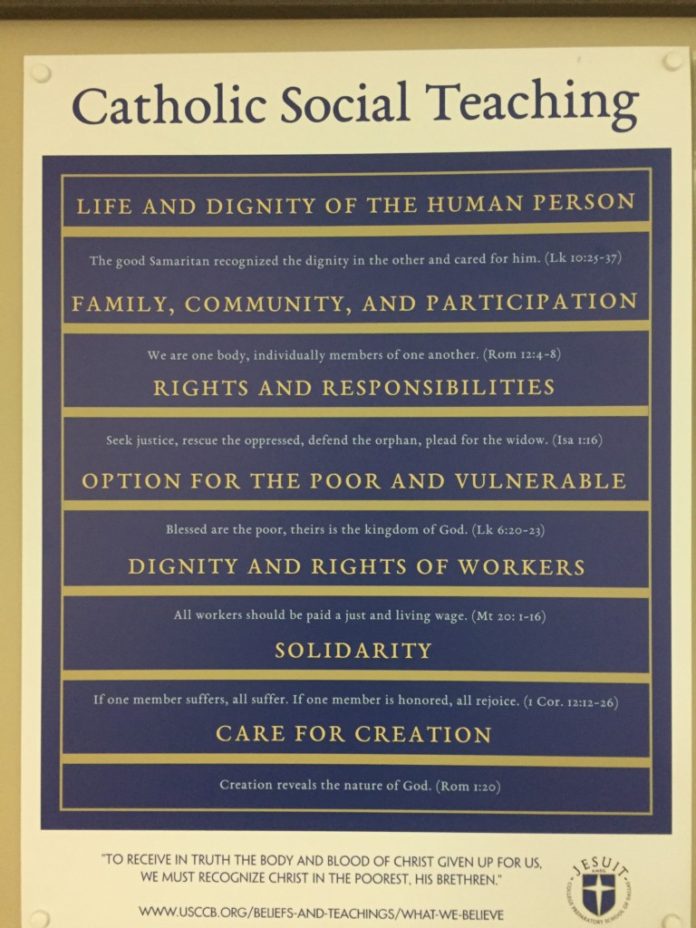 The Catholic Social Teaching is an integral part of the beliefs of the Catholic Church. Encompassing issues of life, family, the environment, poverty, and human rights, the Church’s teachings, known as the seven themes of Catholic social teaching, are intrinsically political, and these teachings endorse a variety of political viewpoints across the ideological spectrum. In this series, we will discuss each of these seven themes and how they are represented in American politics today.

The first, and arguably most important theme of the Catholic Social Teaching, is life and dignity of the human person. According to the Church, this is the belief that “human life is sacred and that the dignity of the human person is the foundation of a moral vision of society.” It is considered to be the foundation for the Church’s social teaching.

The issue most prominently associated with life is, of course, abortion. Abortion became a major political issue in the 1970s following the landmark Roe v. Wade decision in 1973, which held that onerous restrictions on abortion were unconstitutional. Today, abortion continues to be a contentious issue, even if many restrictions on the procedure are unconstitutional, such as procedure-specific bans or clinic restrictions that cause an undue burden. The Catholic Church, for its part, is steadfastly opposed to abortion in nearly any case, and has sponsored many politically active groups like the National Right to Life Committee, to serve the pro-life cause. However, despite the Church’s unequivocal position on abortion rights, 53% of U.S. Catholics believe that abortion should be legal in all or most cases, compared to 44% who say it should be illegal in all or most cases.

On the issue of abortion, the Republican Party is in line with the beliefs of the Catholic Church. The most recent GOP platform proclaimed a “fundamental individual right to life,” and supported overturning Roe v Wade by way of constitutional amendment and the appointment of anti-abortion rights judges. Democrats, on the other hand, opposed further restrictions on abortion and supported abortion rights and other reproductive health services. This is in clear aversion to Church teaching, which explicitly opposes legal abortion and argues that the life of an unborn child is deserving of equal protection.

Abortion is a very important issue to the Catholic Church, particularly in the United States, where 652,639 abortions occur each year. However, it is not the only issue of life discussed in Catholic Social Teaching. The Catholic Church also strongly opposes the death penalty which has been legal in the United States for nearly its entire history. Today, the U.S. is the only Western nation to use the death penalty, although there have been no federally-performed executions since 2003. Today, 19 states have made the death penalty illegal, while 18 have an effective moratorium on the practice and 13 continue to employ the practice.

Capital punishment has been generally opposed by the Catholic Church since the Second Vatican Council. Pope Francis has also signaled his opposition to life imprisonment, which he called a “hidden death penalty.” The Catechism does detail situations in which the death penalty is acceptable, such as when “this is the only possible way of effectively defending human lives against the unjust aggressor,” though these cases are “very rare, if not practically nonexistent.” On this issue, however, it is Democrats who side with the Church’s position. The Democratic Party supports abolition of the death penalty, while Republicans favor retaining capital punishment.

The issue of war is one that the Catholic Church has been vocal about, and not since World War II has the Church considered a major military conflict to be justifiable. The Church calls on nations to “protect the right to life by finding increasingly effective ways to prevent conflicts and resolve them by peaceful means.” The Church abides by the “just war” doctrine, wherein military action is legitimate and justified in the event that the harm caused by a lack of engagement is grave and certain; there are serious prospects of success; other means of resolving the conflict are ineffective; and evils and disorders produced by military action must not outweigh the evil and disorders eliminated by military action.

The United States has a reputation for being the policemen of the world, and the reputation is not without merit. Our country often participates in military interventions across the world, through NATO, within military coalitions, and alongside rebelling peoples. In just the past decade or so, the US has participated in operations in Afghanistan and Iraq, in response to 9/11, the Libyan Civil War, the Iraqi Civil War, the Syrian Civil War, the War on ISIS, and the Yemeni Civil War. The objectives in these wars have varied, from defeating terrorist groups, deposing unfavorable leaders, and ending human rights violations.

Not a single war since World War II has been considered justified by the Church, and many recent wars have been quite controversial, resulting in the power vacuums, political unrest, and rise of further extremism. Unfortunately, war has been a bipartisan affair for much of American history, though in the current party system, Republicans have leaned more hawkish than Democrats. The Iraq and Afghanistan Wars were carried out under Republican President George W. Bush, and Congressional Republicans supplied much of the support for the interventions. On the other hand, participation in action in Libya, Syria, ISIS-controlled Iraq, and Yemen began under the Obama administration and have continued under the Trump administration. The Church’s pacifist and dovish views are often not well represented in American politics, as foreign policy decisions made by members of both parties have gone against the just war teaching.

The issue of life is a complex one, and hardly falls along party lines, unlike so many other issues in this era of extreme partisanship. Life is an issue where both sides can find common ground in supporting, and opposing, views consistent with the Catholic Church. Stay tuned for the next edition, where we’ll cover the Call to Family, Community, and Participation, the second of seven Catholic social teaching themes!