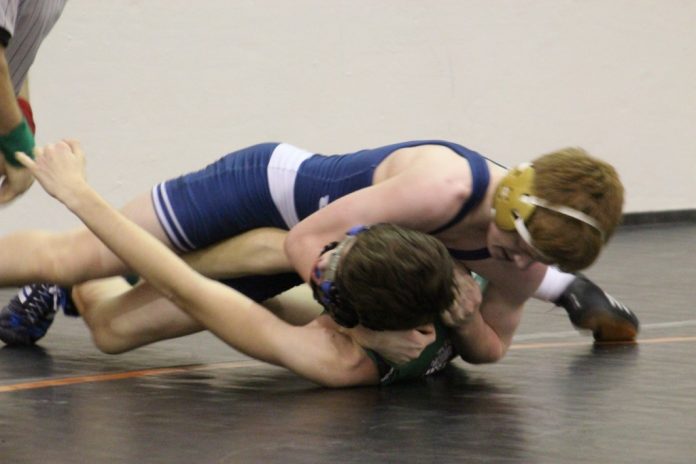 First up, freshman Liam Leahy (120-pound weight class) dominated his first opponent Ethan Saline from Azle White High School. Leahy started the match with a takedown to Saline’s back to jump out to a 5-0 lead. Leahy quickly improved his score to 7-0 after another 2-point near fall at the end of the first period. At the start of the second period, Leahy chose bottom and quickly escaped to make

the score 8-0. Beginning to really run away with the match, Leahy scored another takedown to extend the lead. At the beginning of the third period, Saline chose bottom and Leahy scored again with a 3-point takedown to near the technical fall territory. A tough ride on top by Leahy closed out the match to secure a 13-0 major decision to advance to the Championship round.

takedown to claim an early 2-0 lead. Near the end of the first period, Leahy scored a 3-point near fall to make the score 5-0 going into the second period. Leahy closed out the tournament with another 5-point run over Gonzales to make the score 10-0 and secure 1st place with his second major decision of the day.

“When I’m off the mat and looking at my opponent I feel nervous,” Leahy explains. “But that feeling disappears as the whistle blows and I just wrestle to win.”

Competing at the 106-pound weight class, sophomore Henry Vance began the tournament with a tough loss but wrestled back with an exciting match against Dylan Camarenas from J.J. Pearce High School. After a scoreless first period, Camarenas chose to take bottom and followed up with a quick escape. Near the end of the second period, Camarenas scored a takedown, but Vance quickly responded with an escape to make the score 1-3 going into the third period. Electing to take bottom, Vance struggled to escape underneath a tough ride from Camarenas. But with 39 seconds left in the final period, Vance managed to escape and quickly go in for a takedown to take a 4-3 decision that advanced him to the consolation semi-finals match.

In the consolation semi-finals match, Vance faced off against Brandon Burton from Azle High School. With 30 seconds left in the first period, Vance scored with a takedown, but Burton quickly responded with an escape at the 15-second mark to make the score 2-1 going into the second period. Electing to take bottom, Vance stood up to score an escape and as the second period expired Vance scored another takedown to make the score 5-1 going into the third period. Burton elected to take bottom, but Vance didn’t let him up and put him to his back to score a 2-point near fall. With 5 seconds left, Burton finally escaped and Vance quickly scored another takedown with no time left on the clock to secure a 9-2 victory that sent Vance to the consolation finals match to wrestle for 3rd place. Unfortunately, Vance lost his finals match but came away with 2 victories and a 4th place finish.

Hoping to continue his reign of dominance and his impressive tournament record, freshman Spencer Buchholz dominated his first opponent, Brandon Frueher, with a takedown 24 seconds into the match. However, a reversal by Frueher tied the match up at 2-2. At the end of the first period, Buchholz led 3-2 after a penalty by Frueher. Buchholz chose bottom at the start of the second period but didn’t escape and nobody scored. Frueher chose neutral at the start of the third period, and Buchholz quickly took advantage with a takedown, then put Frueher to his back to score another 3-point near fall. With an 8-1 decision over Frueher, Buchholz advanced to the semi-finals and Frueher headed to the consolation bracket where he went on to place third.

Advancing in his bracket, Spencer wrestled Collin Fager from Azle High School in an exciting semi-finals match. Starting the match off strong, Buchholz struck quickly with a takedown to the back of Fager to jump out to a quick 4-0 lead. After a tough ride on top, Buchholz maintained the 4-0 lead heading into the second period. Buchholz chose bottom after Fager deferred the choice and scored a reversal to extend his lead to 6-0 heading into the third period. Fager chose bottom and popped up quickly to score an escape, but was quickly taken down again to make the score 8-1 at the end of the match.

Heading into the championship round, Buchholz hoped to once again come out of the tournament the champion. Starting off the match with a quick takedown, Buchholz put his opponent on his back to secure a pin and another 1st place finish.

Competing at the 113-pound weight class, freshman Connor Jacquart secured a win over Sabor Abedi from McKinney High School. Abedi scored first with a quick takedown, but Jacquart responded soon after with an escape and then scored a takedown to make the score 3-2. After an escape from Abedi, Jacquart scored another takedown. But as the exciting first period came to a close, Abedi scored a reversal to tie the score up at 5-5. At the start of the second period, Jacquart chose bottom and scored a quick escape and dove in for another takedown. After a grueling second period, Jacquart emerged ahead with a 10-7 lead. Finally, a takedown in the third period secured the 12-9 victory for the freshman.

Be sure to stay tuned for updates on the Ranger wrestling season! Go Rangers! 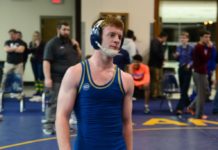 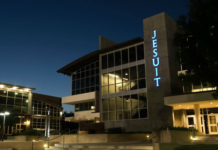