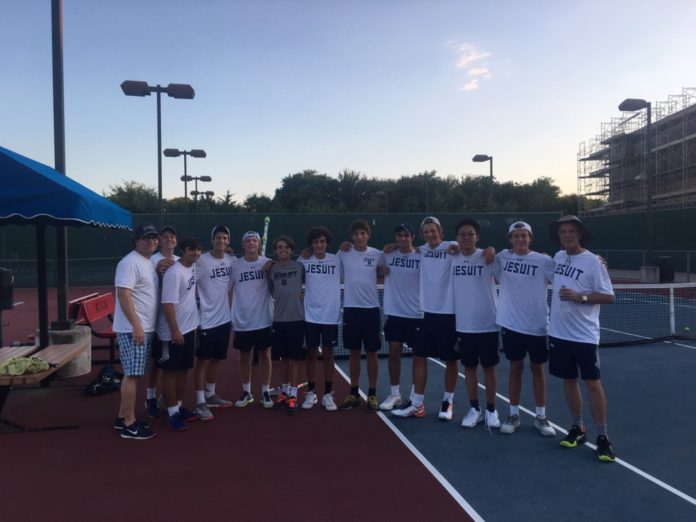 It’s the third set tiebreaker. With the match on the line, Jack Murray ’21 steps up to the baseline. “5-5,” he calls. The tension could be cut with a knife. He shrugs his shoulders back to relax and bounces the ball on the pavement just in front of his left foot. He bounces the ball three more times, then winds his racket back to launch a serve down the T. But before he can toss the ball, he hears a scream in the distance.

“C’mon!” the anonymous voice cries out, the voice of a tennis player pumping himself up from courts that had to be at least 200 yards away.

He was startled by the loud noise, which he originally thought could’ve been a mating call. But it quickly registered that the voice was that of Thomas Cluck ’20, celebrating his first service break. Murray laughed it off then proceeded to serve, acing his opponent down the T.

Tennis is a game of inches.  An inch is all a team needs to squeeze out the match, especially at the UIL 6-A level in which Jesuit competes. Cluck’s scream was the inch Murray ’21 and Ardoin ’21 needed for close out the tiebreaker against Plano West in the Ranger’s season opener.

Rangers Tennis vs. McKinney Boyd
1 of 12

“I thought we played pretty well,” commented head coach Paul McDaniel. “I was surprised we played better singles than doubles. We spend a great deal of time with doubles. Part of it is doubles is about learning to play as a team. It just takes time. This was our first match, West has played 9. Plus, we still have three players recovering from injuries so it’s very difficult to play one of the top three teams in the state down that many players.”

The Rangers bounced back from the West match with a convincing victory against McKinney Boyd on September 3, converting a 3-3 split in doubles into a dominant 8-4 victory in singles.

Stay tuned to The Roundup for more Jesuit tennis updates!