More
JesuitRoundup.org is brought to you by:
The Ashmore Family
Profiles Students Diego Trejo ’20 – Ranger of the Week
Facebook
Twitter
Email
Print

A key role player contributing to Ranger Tennis’s 8-0 start to the 2017-18 season, Trejo has competed near the top of the Rangers’ lineup in several key matches. In Jesuit’s 14-4 win over Liberty Christian, Trejo paired with sophomore Matthew Cole for a top-flight doubles victory while Trejo added a win in singles to keep Jesuit’s unblemished record intact. Jesuit Dallas Tennis player Diego Trejo is this week’s Ranger of the Week. 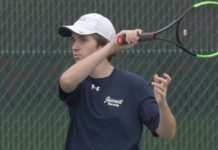