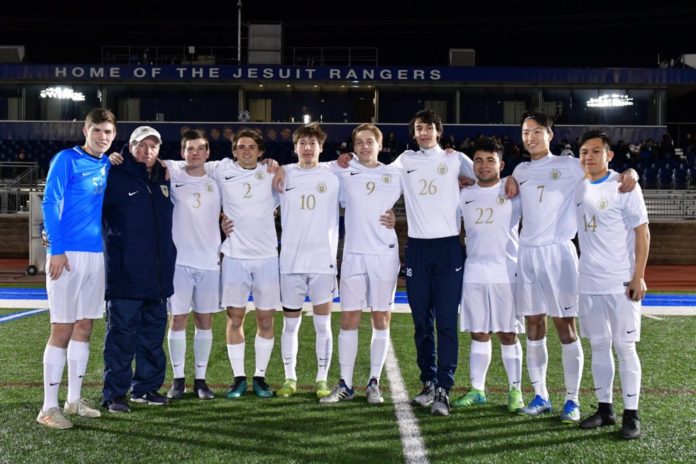 With smiles on their faces, the Rangers soundly defeat the Panthers 3-1 after a sensational performance by Diego Sierra ‘20. Although their win-loss record is not what they had anticipated, they are still happy to end the season with a hard-earned win.

This was the scene at the Jesuit Soccer team’s last game of the season, and despite their tough year, the players gave it their all.

Coming off a several game losing streak, the Rangers sought their first district win in a very tough district match on March 22. James Koshakji ‘19 scored the first goal of the match, assisted by Diego Sierra ‘20. With stellar defense, the Rangers only allowed the Panthers one shot on goal in the first half.

Koshakji commented that “every game, we all gave 100% effort. I’m very pleased with our hard-fought victory in our final game and it was a strong way to close out the season.”

Koshakji continued, “My favorite part of the season, besides our final win, was defeating Bishop Lynch in the first game of the Meinster Tournament. The number of students that came to watch made the atmosphere incredible and it felt like we were playing for something more than ourselves.”

Star goalkeeper Connor Tullis ‘19 enjoyed watching his teammates play together throughout the season. “It was definitely not an easy season in terms of our record. But it was great to see everyone working hard and improving every day.”

Reminiscing on his high school soccer career, Tullis’ favorite aspect of Jesuit soccer was “the coaches and players that I am surrounded by every day. [They] are all great and there is never a dull moment with them on or off the field.”

Sierra is optimistic for next year. “Next season I hope we play with the same energy and heart.” He also believes that there is room for improvement for the team. “We need to hit the weight room more and increase the speed of play on the field, but once that’s done, then there’s no stopping us.”

Coach DeLong, the multiple time state-winning coach, was truly proud of the players this season. “It was a pleasure to coach these young men. We were all a little disappointed about wins and losses, but on the other hand, they come to practice, they work hard, they show true character, never gave up, and played the best that they could.”

Stay tuned to The Roundup for more coverage of Jesuit sports!