More
JesuitRoundup.org is brought to you by:
The Ashmore Family
Sports Soccer A Well-Earned Victory: Jesuit Soccer vs Sachse
Facebook
Twitter
Email
Print 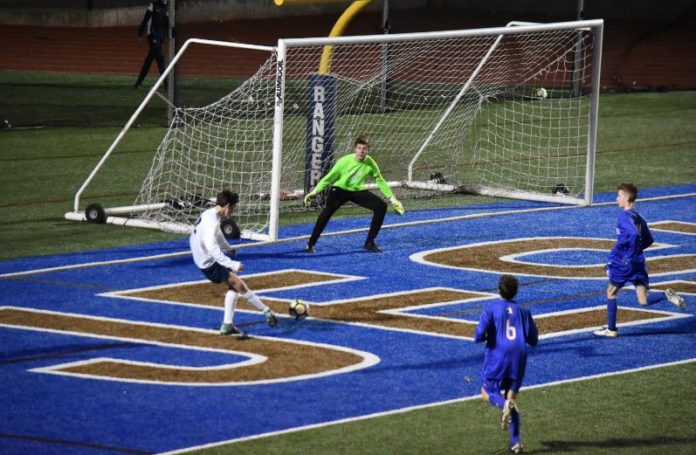 In their last game on January the 23rd, the Jesuit Dallas varsity soccer team squared off against a strong Sachse team.

The Rangers began the game quite slowly, allowing easy opportunities. Sachse started the game off by slotting the soccer ball past the distracted Jesuit Defense, to make the first goal of the game. Sachse was beating the Rangers  1-0  through the 1st half. Trouble was stirring.

5 minutes into the second half a Sachse incurred a mystery call resulting in a Ranger penalty kick. Thus, allowing  Jesuit Dallas’ Diego Sierra’20 to rip a powerful penalty kick for a goal making the score 1-1. Finally at a tie, Jesuit was beginning to gain some steam.

Jesuit Dallas Varsity Soccer Coach Charles Delong expressed his opinion saying “I thought we gave up a poor goal at the start; however, we responded well and tied it up with a penalty kick score.”

Jesuit incurred a mystery penalty too, not long after. It was almost funny, how both teams back to back incurred uncommon penalties, later found to be simple kicking fouls. However, this penalty allowed Sachse the opportunity to score another goal, unfortunately giving them a slight 2-1 edge over Jesuit.

Coach Delong thought Sachse’s left winger made a nice goal when he made a cross from the right to make it 2-1.

Sachse, who was leading, soon after made a grave mistake. They pushed Dallas Jesuit’s John Scott ’19 to draw a penalty.   Diego Sierra’20 then slammed home another penalty kick, making the game a 2-2 tie.

Coach Delong was happy, saying that “the kids played good to tie it up 2-2.”

This opportunity to score was quickly taken by the Rangers, as Ryan Davis ’18  carried the ball for 30 yards and then passed it to Christian Lerma ’18 who did a 360-degree spin to score a goal.

In a great team effort, Jesuit made little to no mistakes, fighting off all of Sachse’s attempts.

Finally, Coach Delong stated that “Lerma did what he does best and made a goal.”  In addition, he thought that although  the “game was a bit dodgy it showed a strong Jesuit team because they worked hard to come back.”

Likewise, James Koshakji ’19 thought it was a “hard-fought game for a well-earned victory.”

Stay tuned on The Roundup for more exciting soccer news.