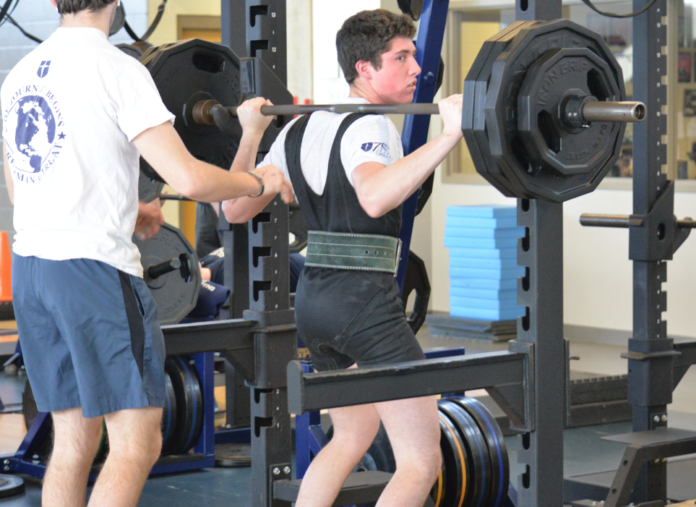 Daniel Van Amerongen ‘18 closes his eyes and flares his nostrils, breathing slowly in and out. He downs another scoop of strawberry pre-workout powder. Teammate Emmet Halm ‘19 forcefully slaps his back and screams into his right ear. Adrenaline pulses through Van Amerongen’s veins as he channels his inner Ryan Brooks ’16. He powders his hands with an abundance of chalk before walking up to the deadlift mat. On the mat rests a 455 lb barbell that could bolster his finish to the top 5 in the region. He steps onto the mat and firmly plants his right foot an inch from the barbell. His left foot follows as the crowd chants his name. Van Amerongen ignores the crowd and instead plays the tune of Whitney Houston in his head. His hands firmly grasp the bar at shoulder width as he straightens his knees and rolls his shoulders back. He pulls the barbell off the ground two inches, holding it there for three seconds before slamming it back on the ground. He takes a step back from the barbell, screaming ‘Let’s Go’ as Halm assuringly pats on the back.

Van Amerongen, along with Nic Schnitzius ‘18, Emmet Halm ‘19, and Will Nickols ‘20, qualified for the THSPA Regionals meet on Saturday, March 3rd.  Held at Keller HS, the meet was exclusive to the top 12 powerlifters from each weight class in Region 6 of Division 1. 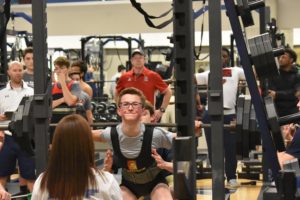 Lifters are grouped into a series of different weight classes, 114 lbs, 123 lbs, 132 lbs, 148 lbs, 165 lbs, 181 lbs, 198 lbs, 220 lbs, 242 lbs, and 275 lbs, and are ranked by the sum of the weight they can squat, bench press, and deadlift. Athletes only compete against others in their weight class, competing individually to earn points for their school. A first place finish earns 7 points, a second earns 5 points, third earns 3 points, fourth earns 2 points, and fifth earns 1 point. The points accumulated by the individuals contribute to the team’s score, which is ranked among the other 41 schools in the district. 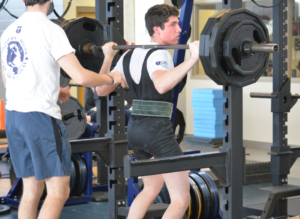 “In powerlifting in general people just associate the sport with gigantic, super heavy guys, but its open to all weight classes. It was cool to be with some lighter weight guys. ”

Of the 42 high schools that attended, Jesuit Dallas placed in 24th place overall with a score of 3 points. Three of the four lifters earned a point for the team by placing fifth in their respective weight classes: Schnitzius in the 114 weight class, Halm in the 123, and Van Amerongen in the 148. Nickols competed with Halm in the 123 weight class and placed 9th overall.

The Rangers have continued the legacy of a strong powerlifting team with their solid performance at this regional meet. Van Amerongen commented on his mindset going into the meet:

“I was excited but hesitant because I knew it could be my last powerlifting meet as a senior.  Powerlifting has a lot to do with confidence and energy you have when lifting. You can’t hit maxes if you don’t believe that you can do it.  Jesuit just really brings the hype, and hype makes the weight light.”

Jesuit’s energy is just one of the elements that fuel the success in big meets like regionals. He also described how the team’s chemistry also sustains their performance:

“Team chemistry is great, you’re only really competing against yourself in powerlifting and training to achieve new maxes so everyone is super encouraging no matter how much you are lifting, just as long as you’re pushing yourself and hitting new personal bests.”

On the team chemistry, Halm added:

“Luckily, our team chemistry is strong, so we were always encouraging each other on every lift.  It really boosted my confidence when I walked up to the bar knowing that my teammates and coaches were cheering me on.” 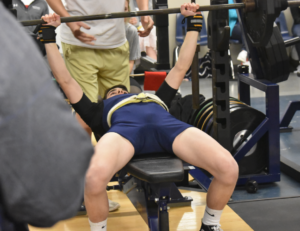 Halm also commented how tenacity is one of the team’s biggest strengths:

“As a team our biggest strength is our grit and persistence.  Whether it is in practice or during a meet we always go as hard as we can and push our teammates to do the same.  Even if someone misses their lift, the important thing is that they went 110% and put every ounce of their strength into the bar.”

In and out of the weight room, Coach Weeks has helped the team grow as both powerlifters and men for others. Van Amerongen contributed much of the team’s success to Weeks, describing:

“Coach Weeks has really helped the team rise to a new level.  He has built our team chemistry by really stressing the importance of confidence as well as the positive atmosphere in the weight room and that everyone is just trying to improve themselves personally.”

This season has been one of growth for the powerlifting team. In addition to increasing their PRs, it has been a season of personal maturation, team bonding, and fun. Though their season is over, the future of the Ranger powerlifting team carries great promise and potential.

Stay tuned to The Roundup for the latest Jesuit powerlifting news.