More
JesuitRoundup.org is brought to you by:
The Ashmore Family
Sports Powerlifting Jesuit Powerlifting Season off to Phenomenal Start
Facebook
Twitter
Email
Print 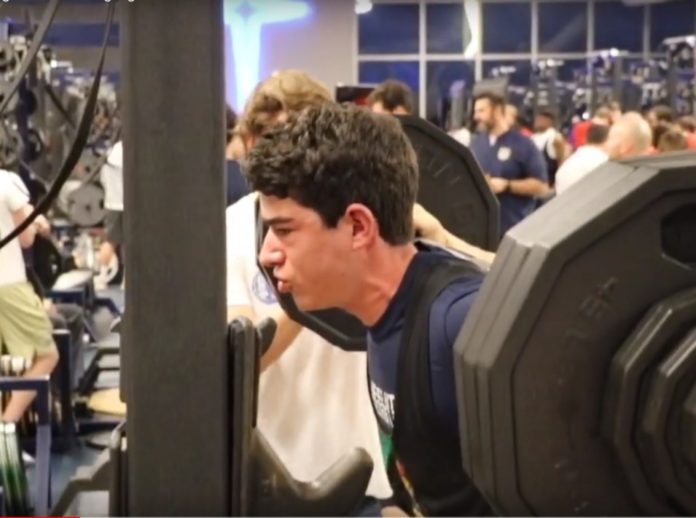 “Strength is the most general physical adaptation. We get stronger through the process of stress, recovery, and adaptation.” — Coach Lacey

Stress, recovery, and adaptation: three words Coach Lacey would repeat over and over at the end of practice to remind powerlifters that strength is gained through the process of applying stress to our muscles while working and our recovery. This helped the team understand that not only do we need to work hard in the weight room to become stronger, but that we also need to let our bodies recover by resting as much as possible and by eating healthy. If we continue this process, our bodies will adapt to the stress we apply to it in the weight room, and will gradually become able to undergo this stress, meaning that our body will become stronger.

At the beginning of the year, the new members of the powerlifting team began to learn the correct form for the 3 different lifts from the veterans and coaches. The three lifts are the squat, bench, and deadlift. Some of the veteran members also had to learn some new skills, as the coaches sought to improve everyone’s form. The first few weeks, the team worked on their cardio. Because of this, on Mondays, Tuesdays, and Thursdays, the workouts would completely drain their energy. Sweat would drip down all over their faces and soak the floor, showing how everyone was putting in the work to become stronger everyday.

After the cardio weeks, the team began to practice on Mondays, Wednesdays, and Fridays, and started working to improve their squat, bench, and deadlift. The veterans quickly began to add massive weight to all their lifts, as they were experienced and needed just a few workouts to get back to lifting the weight they had previous years. However, the new members didn’t improve that quickly, but rather slowly each week they would start to increment the weight, and before they knew it they were lifting weight with the big dogs.

After a whole semester and a few weeks, the Jesuit Powerlifting Team was more than ready to begin their powerlifting journey; a journey that would be exhausting and demanding at first, but satisfying and rewarding in the end.

After countless hours of hard training and recovery, the Jesuit Powerlifting Team finally participated in their first meet of the year on January 16th. Everyone was very excited for their first meet, as the team was finally able to show off their skills and dominate the rest of the competition.

On January 16, Jesuit Powerlifting weighed in during their lunch period for their first 2019 powerlifting meet. Some members were cutting weight to get in their preferred weight category, so after they weighed in they were free to eat or drink whatever they wanted, with some people eating their first full meal since Monday. After school, everyone got together and went to eat before the meet, although some people ate too much during lunch and were too full to eat anything before the meet. After everyone ate, the team gathered up at Coach Weeks’ office for a talk, and right after that the team began their usual warm up and began to practice their lifts before the meet began.

Jesuit was ready, and began with the meet with their opening weight. In the competition, everyone has to do three reps (one rep three times) of each of the three different lifts. However, there is a lot of time between reps for everyone to get enough rest and hydration between their lifts. There were 3 judges, each one holding a green and red flag. The judges carefully observed the lifter’s form, red flagging him if he either missed the rep or he committed a foul.

The veteran lifters were very happy to see all the new members drastically improve and enjoy their first meet. As Will Nickols ’20, a veteran lifter, stated, he “thought it was great to see so many first time lifters hit PR’s and get really excited about the sport,” showing how the veteran lifters were very grateful for the new members putting in all the hard work to succeed in the meet. Emmet Halm ’19 was exceptionally proud of the team, as after the meet, he stated that “[The team has] done really well in training these lasts few months, and [the team] has gotten a lot stronger so that really showed in our first meet.”

Both coaches and teammates supported their team during the competition, and at the end everyone was very proud of what the team accomplished in their first meet, and the experience they got out of it.

After everyone was done with their three lifts, Jesuit Powerlifting began to help clean the weight room as the results were being finalized. For their first meet, the Jesuit Powerlifting team performed quite well, finishing in second place, with Cedar Hill taking first place. Several outstanding lifters from Jesuit Powerlifting ranked high in their respective weight categories: Emmet Halm ’19, Nic Schnitzius ’19, David Morales ’20, and Gabe Morales ’20 all placed first; Will Nickols ’20, Dan O’Brien ’20, and Jackson Daniel ’20 placed second; and Grant Delanoy ’19 and William Courtney ’19 tied for 3rd.

Jesuit Powerlifting had a lot of fun and gained a lot of experience, preparing them for their next meet on January 25th.

Stay tuned to The Roundup for more powerlifting news!