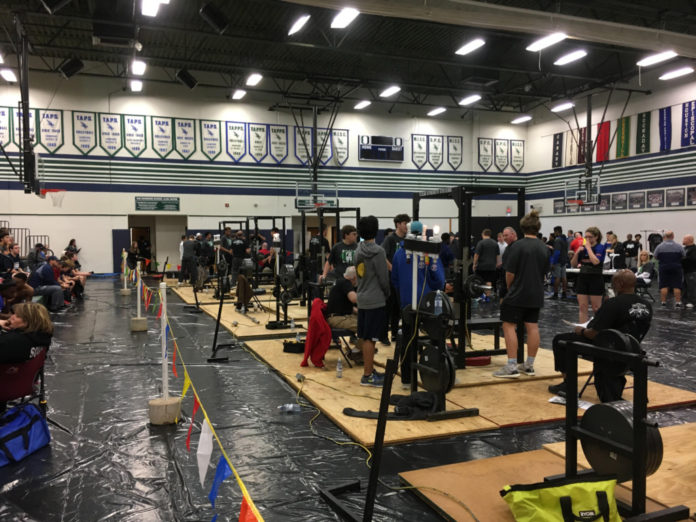 “Down, down, down, UP!”  In the corner of the weight room, a student in a blue singlet and black high-top Converse explodes out of the squat position. During January and February Jesuit’s powerlifting team competed in multiple meets in the Texas High School Powerlifting Association. The Rangers’ regular season consisted of team wins and personal bests during the first three meets.

The team began at home on Jan. 25 at the Jesuit Iron Invitational. The meet included athletes from Cedar Hill, Irving MacArthur, Oakridge, and John Paul II. The lifters demonstrated their ability by gaining a total of nine top-two finishes.

Five first-place finishes were achieved by Daniel Van Amerongen ’18 in the 148-pound weight class, Emmet Halm ’19 in the 123-pound class, Branson Hickman ’20 in the 242-pound class, Nash Corcoran ‘20 in the 132-pound class, and David Morales ‘20 in the super heavyweight.

Four second-place finishes were accomplished by Will Nickols ‘20 in the 123 weight class, Gabe Morales ‘20 in the 242-pound class, Ethan Lane ‘20 in the 275 weight class and William Courtney ‘19 in the 165-pound bracket.

“It was great to host the meet here because it allowed the guys to get their first meet in in an environment that was more comfortable and familiar,” noted Coach Weeks.

The Rangers continued their competitive streak the next weekend on Feb. 3 at the Arlington Oakridge Iron Team Championship with eight top-two finishes.

Their efforts resulted in the winning of the team championship by 14 points with a final score of 56, making Oakridge the “best meet of the year” according to Coach Weeks. 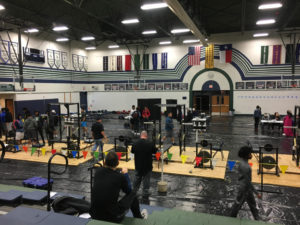 The powerlifters finished their grueling, back-to-back meet schedule at the Cedar Hill Invitational on Feb. 10.

Lifters Wil Nickols ‘20 in the 123 weight class and David Morales ‘20 in the super heavyweight took two third-place finishes. The Rangers placed a close fourth at the meet with 24 points against much larger teams such as Cedar Hill.

Despite the busy schedule, Jesuit’s powerlifters made three consistent showings at their meets, giving four lifters the opportunity to qualify for regionals, an impressive feat since they participate in one of the most competitive regions in the state.

Lifters Van Amerongen ’18, Schnitzius ‘19, Halm ‘19, and Nickols ‘20 placed in the top 12 lifters of their respective weight classes and will continue on to regional competition.

Coach Weeks was pleased with the performance of the rangers across the meets, commenting on how “A lot of our guys did a phenomenal job.” He also noticed the leadership of the returning lifters, creating an exciting addition to the team dynamic.

The lifters will compete at the regional competition on March 3.

Stay tuned to the Roundup for the latest Ranger powerlifting news and coverage on all things Jesuit.