The home crowd emphatically cheering, the entire team enthusiastically jumping after the ball zipped past the goalie and into the top left corner of the net; this is how the Jesuit Rangers won the annual Jesuit Lacrosse Invitational. Coming off an unexpected loss at the hands of the Woodlands, Jesuit looked poised to make a major statement in the remaining preseason games, as the team found form under their senior leaders. In the annual invitational, the Rangers ended up winning all 4 games against Keller, Jesuit New Orleans, Flower Mound, and McKinney.

On Saturday January 30th, the Rangers’ season began and the team was hungrier than ever for a chance to re-write the script from last year. Senior captain, Garrett Munck ’16, said that “this team is special and none of us want to leave here with the same feeling as last year.” With this remembrance of last year’s defeat, the Rangers took Postell Stadium as a unified force and challenged Keller. The game was seemingly in control for the Rangers as they knotted an 8-7 victory, as this game shook off the rust of a real-game scenario for many of the players. Hours later, the Rangers took on fellow Jesuit school, Jesuit New Orleans. Jesuit New Orleans size was their biggest advantage, however quick ball movement and senior leadership down the stretch ultimately led to a 9-6 victory. 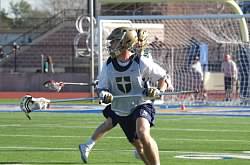 After the game, Virginia commit David Sprock ’18 told his teammates, “this year is going to bring us new challenges, as a team we can persevere, fight for the man next to you.” The Rangers finished Saturday 2-0 and were able to get a feel for the season ahead and the potential road to state.

Sunday rolled around and Jesuit faced Flower Mound and McKinney. Flower Mound played a backer zone against the Rangers, yet Chris Surran’s superior play-calling ultimately led the Rangers to 15-1 victory. The offensive firepower and tremendous defensive play sparked the Rangers’ lopsided victory, as the team seemed to find its stride with their respective lineups and hoped to carry this momentum into their peremptory game of their tournament. The Rangers lastly faced McKinney, whom they defeated 16-1. The Ranger felt great after this win, as senior captain Blake Buell sayid that “we need to keep this momentum going into the season, we haven’t won anything yet.”

Goals by Sprock, Daniel Burnum ’17, Munck, Trey Wiederecht ’17, Buell, Sean Rilley ’16, Grayson Hassell ’18, Jacob Jackson ’19, and Jack Freeman ’16 fueled the offensive firepower. On the defensive side, highly regarded John Michael Priddy ’16 was a “animal on ground balls” says assistant coach Buck McClure, who also regards this team as “special and has enormous potential.” Anchoring the defense down was Luke Millican ’17, who accounted for numerous saves, and told The Roundup that “we just have to play as a team and good things will happen.”

The Rangers look poised to make a State Championship run this year, as the tone has been set by the seniors and reinforced daily in practice. The Jesuit Invitational was a great predecessor to the upcoming season and the team hopes to avenge last years early exit out of the playoffs.