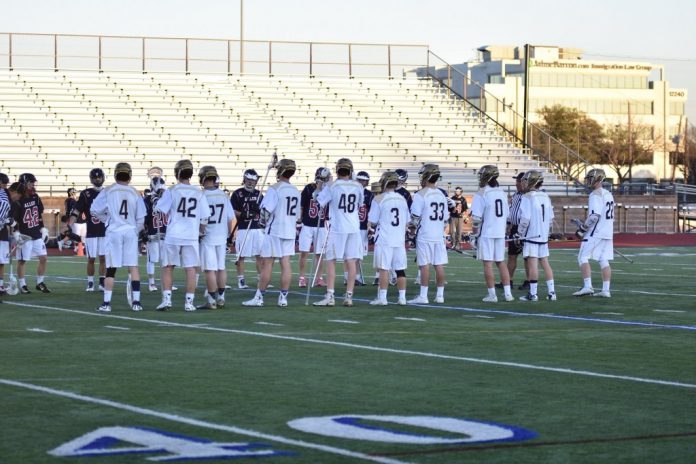 Lacing up their cleats, restringing their heads, dressing in the famous blue and gold, the Jesuit Varsity Lacrosse team season has finally come back around, and the team is poised for a terrific year.

The Rangers started the year off strong with a 4-0 start facing off against the formidable opponents of Flower Mound, Kingwood, The Woodlands, and Stake Jesuit.

The Rangers’ first two games of the year were both held at Jesuit under the lights of Postell Stadium. In the first game, the key was their ability to pounce on Flower Mound early, jumping to a quick 7-2 lead at halftime. The quick lead was not a surprise for Ranger fans because, as Head Coach Chris Surran put it, “The team was doing a good job of preparing in the pre-season. They practiced well and prepared each day with purpose and focus.” The Rangers held on to win this game by a final score of 12-5 thanks in part to Trey Wiederecht’s ’17 impressive 4-goal performance. On the defensive side of the ball, the Rangers were led by senior John Michael Priddy. Priddy is a Michigan commit who has tremendously helped Jesuit all four years. Speaking about his senior year, Priddy said, “This season is probably the most important for me so I want to play my best, but I don’t think I’m quite ready for my Jesuit career to be over.”

In the Rangers second game, they again tasted victory this time however the margin was not as large. They took a 4-0 lead at the end of the first quarter which was enough for them to coast for the rest of the game to a solid 8-5 victory. The Rangers had 6 players who scored a goal, proving the Ranger’s depth this year. Coach Surran mimicked these ideas saying, “The strength of this year’s team is depth. Our team has 5 attackmen and currently 3 of them are hurt. One of our senior LSMs is also hurt. We have 3 very good goalies and a host of defenseman that although young are performing well.  Our depth has allowed us to move the chess pieces around to keep the ship sailing forward.” One of the goal scorers was junior midfielder Reece Ellison. Ellison talked about the team’s performance, saying, “We played strong as a team and it always helps to win your first games. We have a great team this year and we hope to make a big run this year.”

The Rangers’ third game was one of their most important games of the year because they matched up against the Houston-based school, The Woodlands. The Woodlands knocked the Rangers out of the playoff and are the reigning 2nd place team, and the Rangers had to travel to Houston for this long awaited rematch. Coach Surran said the week leading up to the game “the players were focused and practiced with good energy.  We prepared well as a team going into the game.”

Again, the Rangers found themselves out to a 4-0 lead which allowed them to establish the tone for the game. 7 of the Rangers 9 total goals for the game were scored by two players, David Sprock ’18 and Daniel Burnum ’17. Their 7 goals allowed the Rangers to secure the victory finishing the game with a score of 9-5, Burnum tallied a team-high four goals. He had this to say about the game: “Going into the game the entire team had a big chip on our shoulder. We had been looking forward to playing the Woodlands since the devastating loss a year ago. So when we got to the game, we brought intensity and emotion that was unmatchable. Everyone executed and fulfilled their role, I was just in the right place at the right time. But, we never let up and just kept our foot on the gas, keeping the tempo high, which led us to all play great and work together as a unit. The overall enthusiasm that we brought to the game, knowing how well we would need to play was the key to winning the game, along with working hard in practice to get better every day. Also, Luke Millican ’17 came up huge in goal, making some big stops on defense, along with John Michael and Reece [Ellison] who came up big in the transition game.”

The Rangers stayed in Houston to face off against Jesuit rival Houston Strake Jesuit. The game truly was never close. The Rangers hopped out to a 6 goal lead and they never looked back. A plethora of Rangers found the net as they finished the game with an 11-2 win. Ellison said, “We played great which always helps us win big. Everyone had a good game which proves that whenever we have a collectively strong performance we see good results.”

The Ranger’s hot start has some Ranger fans thinking big things. Junior John Wunderlick said, “I consider myself a huge lacrosse fan. I am a product of the Dallas Deuces program so I know a thing or two about the sport, and when I look at this team, I break out a little sweat of excitement about the talent that this team [possesses].”

Coach Surran echoed this excitement saying, “The strong start gives us something to build on moving forward. The team knows that we need to continue to improve every day to be able to compete well in our district.”

The Rangers move forward in their contests with plenty of big games to come. Make sure to come out and support the squad as they look to make a historic run this year.