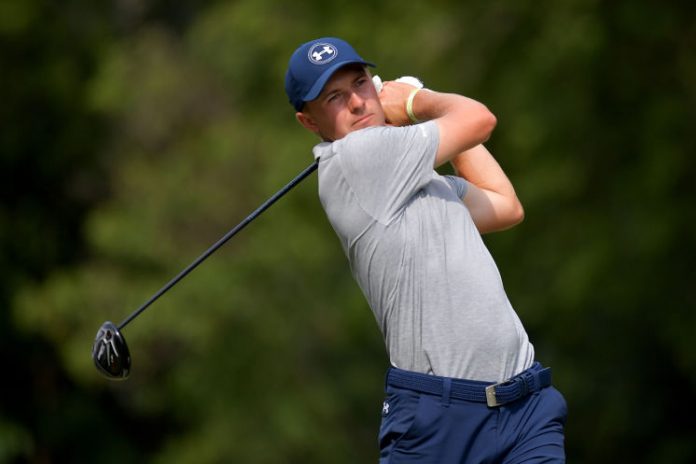 Jordan Spieth, Jesuit Class of 2011, was the keynote player in this year’s AT&T Byron Nelson. Jesuit alumni, University of Texas at Austin alumni, and DFW golf lovers came by the hundreds to watch the Dallas native participate in the final tournament at the Four Seasons at Las Colinas.

Unfortunately, Jordan’s weekend would end early as he missed the cut. This came as a huge disappointment for not only Jordan but also for everyone who was hoping to spend their weekend watching one of the top-10 golfers in the world.

I had the opportunity to receive media credentials on behalf of the PGA and The Roundup. It was a tremendous opportunity to experience a major sporting event from the viewpoint of a press member, but the content of what I wished to write about was quickly changed after just 36 short holes.

For the first two rounds, I followed Jordan Spieth through all 36 holes, along with Matt Kuchar and Brandt Snedeker. With a 7:50 am tee time on Thursday and a 12:50 pm tee time on Friday, they were both long days with much more walking than I had anticipated.

Jordan started off the tournament as you would expect, getting a birdie on his first hole. He would go on to get a few pars before suffering back-to-back bogeys on his fifth and sixth holes. Luckily, Spieth quickly rebounded with a birdie on his seventh hole to get him back to even par for the round. Then, Jordan would make par on eight consecutive holes before getting back-to-back birdies and one last par to finish his round at a respectable 68, which is two under par at the TPC Four Seasons Resort. By the end of his round, Jordan walked into the clubhouse tied for 19th for the tournament.

At this point, all seemed well for Jordan. He shot a solid first round and seemed to gain confidence going into the weekend. So, Jordan went home and prepared for his 12:50 pm tee time the next day.

In the second round, the crowd was enormous and ready to see Jordan take control of the tournament he once participated in as an amateur at the age of 16. Mirroring the first hole of his first round, Jordan made an impressive birdie to fire up the crowd and get his round going.

After the first hole, Jordan would struggle on the front nine with four bogeys, two birdies, and two pars to head into the back nine.

This is where it all went wrong for Jordan. With only 3 holes left in his round, Jordan sat just three shots below the cut-line of two over par and just needed to finish strong to get himself in position for a weekend run. But, things took a turn for the worse on the 16th hole.

That’s right. Jordan Spieth quadruple-bogeyed the 16th hole at Las Colinas to put him one shot over the cut-line with just two holes remaining. Unfortunately, Jordan could not recover from the hole and finished the last two holes with back to back pars. It was a heartbreaking moment for Jordan fans and golf fans everywhere.

However, Spieth showed his true colors immediately after the round. As soon as his weekend ended, he asked his caddie for a marker and headed over to the autograph zone for an extended time with the kids that looked up to him.

While golf fans were unable to see the beloved Spieth on his home turf, the 2017 AT&T Byron Nelson did not disappoint. The tournament ended after a playoff between Billy Horschel and Jason Day. Horschel missed a putt before the playoff that would have sealed the win for him, but Jason Day returned the favor with a heartbreaking missed putt on the first playoff hole.

After the missed putt, you can see Billy Horschel tell Jason Day, “that’s not how I wanted to win.” But, I am sure that Horschel will not be thinking that when he brings the $1.35 million check he earned from the weekend.