More
JesuitRoundup.org is brought to you by:
The Ashmore Family
Sports Jesuit Water Polo Clinches Back to Back Champ Title
Facebook
Twitter
Email
Print 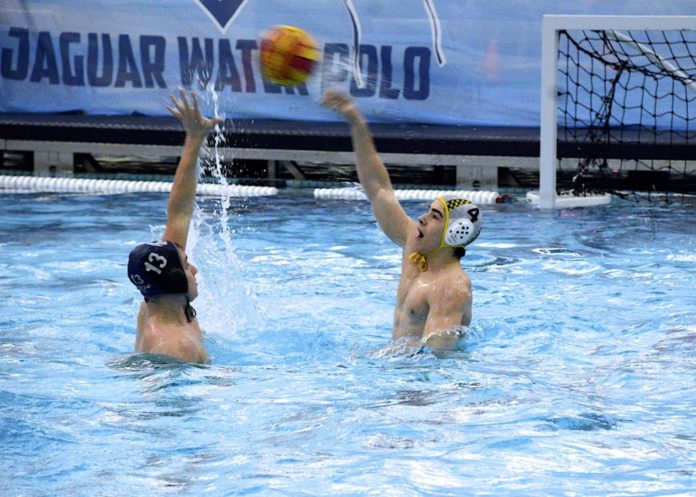 The ref blows his whistle, and he drops the water polo ball into the center of the pool. Will Mckinney ’21 furiously puts his head down with a determination to get to the ball first and passes it onto his teammate Emmet Halm ’19, who sets up his offense for a position to score the first point.

Coach Silver standing from the sideline screams out his orders, accosting the six Rangers in the pool on their mistakes. The ball zooms into the possession of Sean Holden’19, senior captain, who impressively lunges out of the water with his size 17 foot! to propel him out of the water like a shark. Aiming for the top left corner, Sean hooks the ball into the goal and parents explode into a cheer, filling the entire natatorium.

Throughout March and April, the Jesuit water polo team competed in multiple tournaments leading them to their impressive season-ending championship. The team handled several setbacks, first being able to practice only two days a week hindered the team’s growth at the beginning. As well as switching training locations because of broken pools. With that being said, the Rangers made the best of the situation.

The new coach for the water polo team was Coach Brad Silver. Here’s what he said about his initial thoughts of the season: “I had little to expect regarding start coaching a new program in my career. I was disappointed that our program only had two practices each week off campus and planned accordingly. I instilled in the players to make the most of it and most importantly to have fun”.

As the season progressed, he mentioned, “I was amazed by the numbers of players with an interest and/or previous experience in the sport, that helped direct my knowledge to help improve the team as best I can.”

The rangers birthed their season starting out against number three in the state Guyer. The Rangers lost a close match with Sam Steffler ’22 (a.k.a The Sleeper), scoring an impressive goal, the first game of the season ending in a loss 10-8. The next game on, the boys were victorious over MacArthur with an 8-3 win, with Jesuit goalie Matthew Yerrington ’20 being vital in their victory defending several magnificent shots. The Ranger’s finished 7th out of 12 in the tournament.

Christopher Pontikes ’19, who saw the match, commented on how he “really enjoyed watching my Jesuit bros play water polo. I’ve never seen a sport quite like it. I saw some hard work from Sean Holden and Josh Klein. The teamwork takes to be as successful as the Jesuit team is beyond belief. I’m still amazed by the water polo team and their great season.”

Kicking off the tournament, the Rangers rematched Guyer, and unfortunately the Rangers were defeated 14-6 in their first match. Braden Barale ’19 led the team in goals that match, along with Jonathan Hageman ’20 as a key player in defense, defending most shots that flew at him. They played back to back against Lake Highlands and then Heath.

The Rangers were upset in the game against Lake Highlands motivating them to win their next match against Heath. Will Mckinney ’21 “a.k.a Mr. Speed” (coined by his teammates) enabled the team to win against Heath with his stellar shooting performance.

Senior Noah Holben ’19 noticed how “seeing the potential in the team [was] really inspiring for me to help lead my younger teammates to the best of my capabilities. As a team, we faced a lot of adversity that weekend, but learning from our mistakes, we were able to turn our season around at the end.”

The Jesuit Rangers competed in Irving over the weekend. The first match the players played against was Colleyville Heritage, with the efforts of Emmett Halm ’19 “a.k.a The Sharpshooter” shooting in traffic to help out the team on offense. The game had an electrifying ending in overtime, but unfortunately the Rangers were defeated by one point.

With the help of Lead scorer Sean Holden, and by goalie Matthew Yerrington ’20 The aqua rangers redeemed themselves, winning their next match 12-8 against Grapevine. Senior Josh Klein’19 had this to say afterward: “we played our [tails] off finishing the day with an exciting redemption. I’m proud to see that the team bonds together so well and that we keep on improving.”

The aqua Rangers faced off against Dallas ISD. Ryan Brown’20 helped the team by providing lockdown defense, and quick turnovers to assist John Hibbs ’19 to score the most points for the team that game. The match ended in a tie 8-8 and in the next match the dynamic “junior” duo stepped up again to help defeat Rockwall with the final score 9-4. Aidan Hoofard ’19 acknowledged how “watching how well we play as a team is awesome to watch, seeing the effort we put in during our early practices pay off is very rewarding.” David Reichert ’19 also added that “the team has great energy that we all feed off of, seeing our brothers perform well is as much fun to watch as it is playing.”

The Rangers came into the final tournament ambitious and excited to show off their teamwork and skills in the most significant moment of the season.

In their first game, against Keller High school, the Rangers were down at the half. Lighting up the pool during the second half, the Rangers secured the win 9-8. In their second match of the tournament, the Rangers destroyed the opponent with an 11-3 victory. Will Mckinney stepped up and led the team with 7 goals.

Will Mckinney commented on the games saying how “we played smart, and as a team, I read the defense and did my job to help out”. The Aqua Rangers placed themselves in the championship match against Dallas ISD. The Rangers continued their winning streak with a 10-8 win. Sean Holden led the team in points, with the help of John Hibbs and Ryan Brown each stealing 3 possessions to help out the offense.

“Regarding the Championship, I hoped the team would end the season with positive competitive results. Players realized that when playing as a team, instead of individually, the team was successful both competitively and emotionally.” 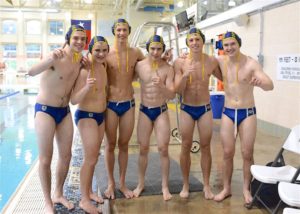 Finals Season Quotes from the Captains:

“The water polo team drastically improved from the first game to the last, The team ranged from promising newcomers who were just learning the game to many returning players building on their foundation. Through weeks of grueling practices, I believe we learned how to play as a team, using this chemistry to defend our title as North Regional Consolidated Champs. I’m extremely thankful to my teammates and the coaches for making this season such a success.”

“Jesuit Water Polo truly expresses what it means to be not just a team but a family. Though the team is young, it shows great promise with enthusiastic, athletic, and aggressive players from all grade levels.”

“We struggled at the beginning of the season but became more seasoned with practice and developed strong team chemistry that demonstrated itself both in and out of the water.”

“When we compete, we fight not for our own glorification in the stat books, we fight for our brothers. This year we were able to defend our championship title against strong teams. It was inspiring to share this experience with my brothers and our coaching staff, and I know that I will see the name Jesuit Dallas leading the great state of Texas in water polo’s future.”

“I think the team grew immensely over the season; it went from a bunch of guys who could swim pretty well and were thrown into a pool with a ball and several other guys and over time learned to come together and play as a team. Learning, growing, and bonding together, the team started to become a family.

“I think that these are some of the best things about water polo, that it draws everyone to treating each other with respect and wanting to be apart of this community. It’s not a sport where one person can carry the team, you can’t be selfish, and you have to play together to succeed in this sport.”

“This can be seen in the final tournament when the team started ranked as the underdogs, and not the favorite to make it to the finals. When we came together and played for each other as one unit, we came out on top with a memorable win!”