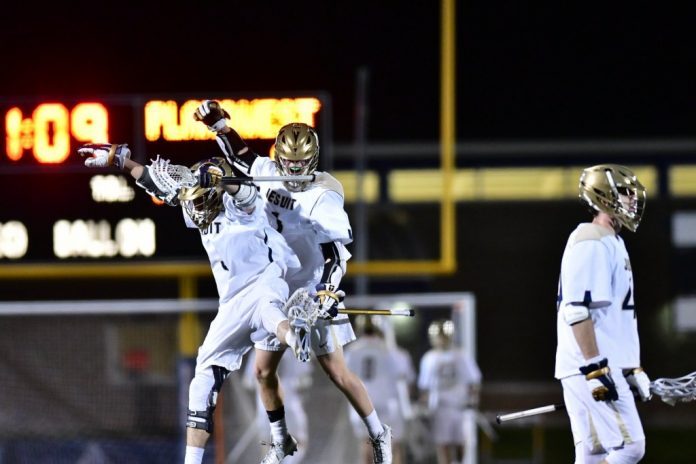 Hoisting the Texas State Championship trophy was the manner in which the Jesuit lacrosse team ended their season last year, the first title in program history. There is no better feeling to have all your hard work and countless hours on the field become manifested in winning a state championship. The Rangers, returning much of the talent used to secure the title last year, looked poised to repeat. The Rangers faced a young, yet very talented Woodlands team from Houston, Texas. The Woodland Highlanders had one goal in mind, to come into Dallas and knock off the defending state champs.

The radiant sun was high in the clear blue sky, watching over the players as they prepare to settle the first “true” test for each team. The Rangers were ousted two years previously by the Highlanders in the playoffs, a loss that they used to fuel their preparation for this contest. The Highlanders came out firing, scoring first and rode this momentum for the entity of the game. At halftime, Coach Surran expressed to his team, “you must battle through the adversity, you cannot turn on each other”, as this motivation was attempting to fuel a comeback. The Woodlands contained the state championship offensive MVP, David Sprock for most of the game. Additionally, senior attack Daniel Burnum was limited in this outing with a stout defensive effort from the Highlanders. The Rangers were down heading into the fourth quarter in a game that was riddled with countless turnovers. The Highlanders emerged victorious with a final score of 11-9, as the Rangers saw the areas they needed to improve in if they hoping to make a title run they did last year. Senior, Trey Wiederecht expressed to the team after their defeat, “we must trust in each other, the only way we win games is to play as a team and trust the system Coach has laid out for us.” The Rangers had to get this loss out of their mind quickly as they had three games in four days the following week.

A brisk Thursday night welcomed the Plano West Wolves into Postell Stadium, as the Rangers were attempting to avenge their first home loss in years. The Wolves battled well last year with the Rangers and the Rangers knew they had to be ready for a dogfight. Senior, Dixon Smith, who is committed to Jacksonville University, guarded and limited senior midfielder from West, Cody Foster, who is also committed to Jacksonville University. A stout defensive effort by Smith, Luke Millican ’17, and Aidan Johnston Johnston ’18 combined with a great offensive outing for Wiederecht and Sprock and Buell led the Rangers to a 7-6 victory on their home field, a great feeling for all the players after their defeat the previous week. Coach Surran reiterated to this team after their victory, “every game will be a battle, I’m proud of the way in which you fought for this victory.” Michael Kelley ’17 spoke after the game to the team, “I’m glad of how we fought back when we were down, it showed Coach and the team how much more we could give and that were never truly out of the game.”

A quick turnaround after a Thursday night game had the Rangers on a bus down to Austin on Friday to play Westlake and Lake Travis over the weekend. The Westlake Chaps were a battle-tested group, as they made a run to the semifinals last year and had loads of talent on both sides of the ball. The difference maker in Coach Surran’s praise was “Will Piot, his determination, and courage on the draws and groundballs allowed us to have extra possessions and our offense utilized these to their advantage.” The Rangers were down early on in the game but once again, mounted a comeback and secured a crucial victory against one of the state’s top teams. Luke Millican noted, “the defense was very prepared, Coach’s game plan worked well and we executed on all sides of the ball.” The Rangers topped Westlake 5-4, a ground out the victory for the Rangers.

On Sunday the Rangers challenged a younger Lake Travis squad that was hoping to upend a much more developed Ranger squad. Yet another gritty defensive stand led by Smith and Millican and Johnston held the Cavaliers to only 6 goals, while another hat trick by Wiederecht and goals from Burnum, Sprock, Hassell, and Tabor propelled the Rangers to a 10-6 victory. Coach Surran noted to his team, “I just want to express how proud of you all I am for the manner in which you battled over the past 4 days, it’s not easy but you grew as a team and you all saw the potential you have.”

The Rangers’ Lacrosse team will play their next game against Flower Mound on March 9th.  Go out and support your Rangers!