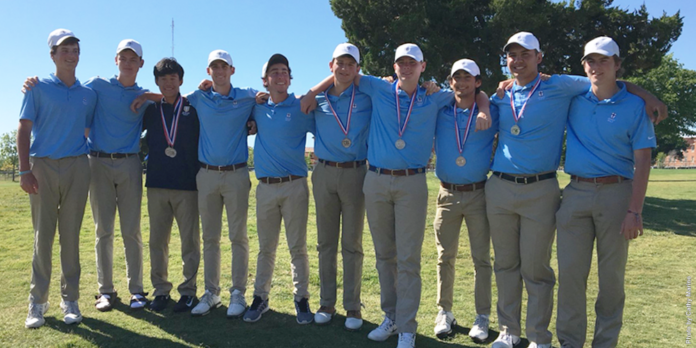 “Golf is the closest game to the game we call life. You get bad breaks from good shots; you get good breaks from bad shots – But you have to play the ball where it lies.”
-Bobby Jones

Jesuit golf, much like this quote emphasizes, has had a tough stretch throughout February. However, they’ve done a great job rolling with the punches and are making serious strides to improve.

In their first tournament, the Faith Cowboys Invitational, the team overall placed in 7th place. The team was led by Brendan Nelligan ’18, who shot a 78 on the day. Close behind, Kevin Currier ’19 shot an 82 while Jackson Houston ’20 shot an 88. As a team, Jesuit shot 341, with the first place team shooting 329.

“The team is doing incredible this season [and] if we keep up the good work we may have a chance at winning state,” said Currier.

Continuing on, Currier mentioned that “the team has bonded in spectacular ways, and all my best friends at Jesuit are on the golf team.”

Later on in the month, the JV team competed in the Mounger Memorial Tournament at Canyon Creek Country Club. The Gold team placed in 3rd place overall, shooting 340. The Blue team shot 358, finishing in sixth. The first place team shot 322.

Coach Marino said, “the team did a good job in cold weather and extremely slow play in this JV tournament against a good field.”

On February 19th, Jesuit’s varsity team competed in the Max Memorial Tournament at Bridlewood Golf Club. The team finished sixth on the day, with a strong performance among the difficult field. Carson Cusick ’20 shot a 77, the lowest Jesuit score on the day.

Coach Marino felt that “the team did a good job in rainy weather.” Due to the weather, only nine holes were played in the second hole due to the conditions of the course and potential hazards.

Andrew Buckley ’18 reflected on the season so far:

“I think the team has had an above average performance this year because we’ve had great results in our major tournaments like the Bart Granger and the tournament at TPC four season.”

Mirroring what Kevin said earlier, Buckley said “the team has bonded this year through our advanced level of play because we are able to push each other to play better.”

“We always play with each other on weekends to further advance and hone our tournament performance which also helps us advance our personal relationships,” emphasized Buckley.

In short, the team is taking these early season defeats to heart and using them as motivators for a postseason run.

After a rough start in February, the team seems to be making a turn in the right direction with more frequent practice and more dedication to the team. Seniors, like Buckley, motivate and lead the team, guiding them hopefully towards post-season success.

Check back to the Roundup for more golf and other news!