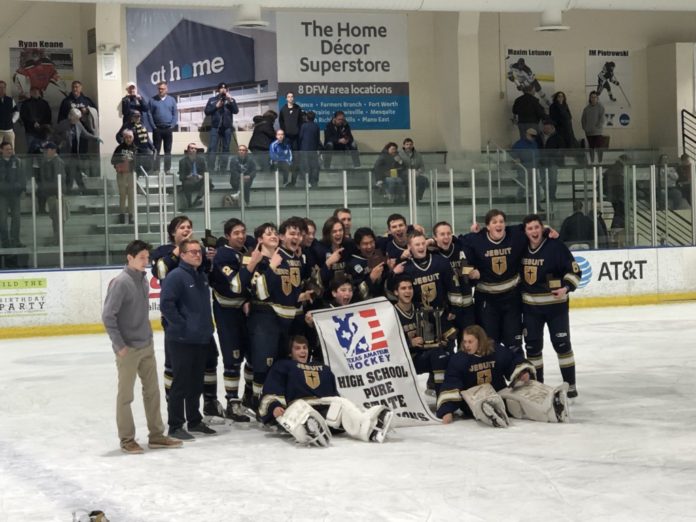 “You and your opponent want the same thing. The only thing that matters is who works the hardest for it.”

The Ranger Hockey Team definitely outworked the Allen Eagles, as they won the hockey program’s fifth TAHA Pure State Championship on January 26th, 2019 at the Stars Center in Valley Ranch. The final score of the first game was 3-2, while the second was 4-2. 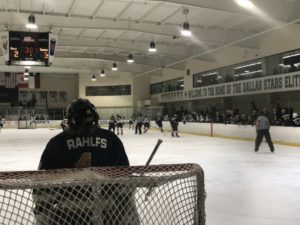 The first game of the best-of-three series took place on January 25th, 2019. The scoring for Jesuit started with Seth Dragojevic ’21 scoring a goal a few minutes into the period, assisted by his brother JonMichael Dragojevic ’19. Allen scored with four minutes left in the period, and the score stayed the same as the period ended with a 1-1 tie.

The second period began with Bryce Clark ’19 scoring 7 minutes into the period, giving Jesuit a 1 point lead. Within three minutes, however, Allen matched Clark’s goal, tying the score at 2.

With 4:33 left in the third period, Seth Dragojevic ’21 scored his second goal of the game, putting the Rangers ahead and winning them the game, as their defense held for the remaining time. The Rangers then had to win one more game in order to secure the state title. 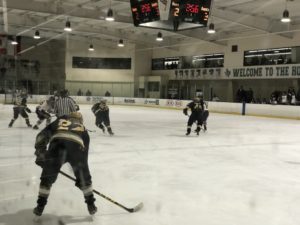 The puck dropped at 4:30 for the second game, and the Rangers quickly got on the board with JonMichael Dragojevic ’19 scoring a goal in the first period, assisted by Seth Dragojevic ’21. Allen found the goal 2 minutes into the 2nd period, so the score was tied at 1.

JonMichael Dragojevic ’19 scored a goal 4 minutes into the 3rd period, then proceeded to score another after that with 10:23 left in the game, completing his hat trick. Allen managed to steal another goal with a few minutes left in the game, but Dragojevic answered with his fourth goal of the day, as he iced the game for the Rangers. The final score was 4-2, Rangers, as they clinched the state title.

The Rangers played well defensively, including a stellar performance from Jack Rahlfs ’20, who saved 28 out of the 30 shots sent his way. The defensemen, composed of Marco Campioli ’19, James McCown ’19, Nick Zang ’19, Joseph Van Beek ’19, Luke Skaggs ’20, and Chase Phillips ’20 played a good game in not allowing Allen to get many open looks on goal. 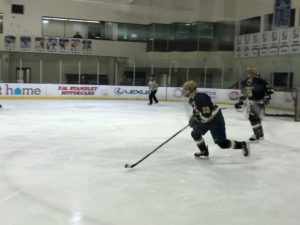 After the match, team captain Bryce Clark ’19 summed up the team’s performance as he said: “The boys played like men and deserved to win.”

With an impressive state title now in Jesuit’s possession for the next year, they look to use this momentum to finish out their season with 3 games to go.

After the regular season ends, the Rangers look to succeed in the USA National Hockey Championships in Cleveland, Ohio in the spring.

Make sure to check back with The Roundup for more hockey and other sports news!