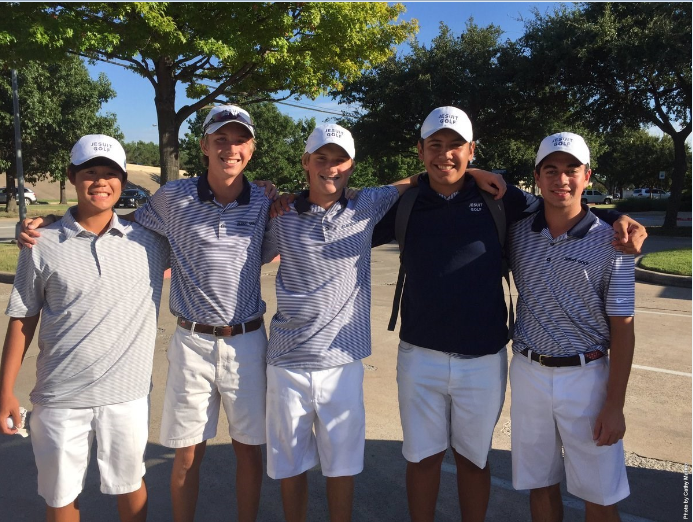 Yet another tournament is won by Rangers golf. After a long day of golf in the sun, they can relax knowing that they have won another tournament for Jesuit. Both the JV and the varsity golf teams have been posting spectacular performances throughout the season at every tournament that the play in.

Jaguar Fall Classic
The JV golf team competed in the Jaguar Fall Classic in Flower Mound on September 21st. The blue team came in 1st place while the gold team came in second out of 10 schools. John Stollenwerck ’19 was proud of the teams performance, noting that “the team did really well, coming in first place and second place in the tournament. It was our first tournament as a team, and our victory really gives us hope for a good season.”

Bart Granger Invitational
On September 24th and 25th, the Jesuit varsity golf team participated in the Bart Granger Invitational at Pecan Valley Golf Course. Said Jackson Houston ’18, “I thought we all played very well, and with it being our first tournament of the season, we showed great potential for the rest of the year.” The Rangers finished in 11th place out of 52 teams.

“The Classic” Invitational
On September 30th and October 1st, the varsity team participated in “The Classic” Invitational at the Texarkana Country Club. Houston again commented that “we were up against a lot of good teams on a very difficult course. My teammates and I didn’t play to our full potential, but we were able to finish in 5th place.” Mariano Barbosa ’19 finished 5th place overall in the tournament to lead the varsity team to its first top 5 finish of the year.

Trinity Invitational
The Rangers posted yet another great performance at the Trinity Invitational at the Texas Star Golf course in Trinity, Texas. The varsity gold team finished in 2nd while the blue team finished in 6th place. Luke Harrison ’18 remarked, “The teams did really well. We competed against several other great teams, and some of us just had rough days. We hope that we cans start to win some of our upcoming tournaments.”

Plano ISD JV Tournament
Both of the JV teams participated in the Plano ISD Tournament. In Allen, Texas, at Twin Creeks Golf Club, the JV Rangers posted very strong performances against hefty competition. JV blue finished in 2nd place, just ahead of the gold team, which finished in 3rd place. Such strong finishes are becoming commonplace for the JV Rangers early in their season.

RHS Sherrill Shootout
With the gold team coming in 1st place and the blue team coming in 4th place, the varsity golf team had yet another great performance at the RHS Sherrill Shootout. Griffin Till ’18 noted that “both teams played exceptionally. I’ve been really proud of our teams this year, as we’ve been playing really well in all of our tournaments. I’m looking forward to winning more tournaments as the season continues.”

Both teams have been winning tournaments all year. The varsity team shows great talent with a young team consisting primarily of Juniors and Sophomores, while the young JV team has been showing great potential for the years to come. The season continues, with a small respite in tournaments until the JV teams participate in the Bishop Lynch Fall Invitational on October 26th.