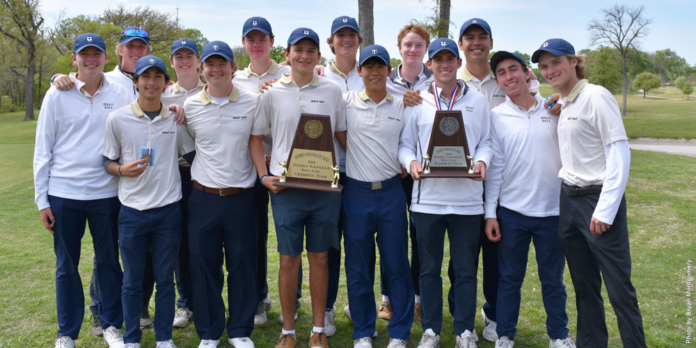 Two inches of green. That’s the only thing standing between Senior Luke Harrison and the end of his 4 year Jesuit golf career. The countless hours, weeks, years of practice all come down to these 2 inches. He squats down to be eye-level with the ball. He channels his inner Happy Gilmore and starts yelling at the ball. Nothing. He tries to blow on the ball to make it move just a hair. Nothing. Harrison just ‘settles’ on a 152, 13th out of the 96 golfers in this regional tournament.

For Luke Harrison ‘18, Jacob O’Gara ‘18, and Andrew Buckley ‘18, this was the last Jesuit golf tournament of their accomplished careers. This season has not only been a memorable one for these seniors but also for the whole team with highlights on and off the course.

The district 6-A championship on April 5th & 6th was the culmination of the golf season. Jesuit sent both their A and B teams to this tournament at Sherrill Park Golf Course in Richardson to compete against the other 7 schools in the district.

After the first round, the Jesuit B team was actually in 1st place, ahead of the Jesuit A team by a couple of strokes. The A-Team went on to win the district with a staggering 595, shooting 13 points lower in the second round. Forest Park ‘19 led the A-Team and the whole tournament with a 142, two shots under par. This is his second consecutive district 9-6A title, improving two shots compared to last year.

The Jesuit B team was able to hold off J.J. Pearce by one stroke and finish second place overall with a score of 613. The leader of the B Team, Senior Jake O’Gara, shot a 157 to place 11th overall in the tournament. Regarding the B Team, Coach Kathy Marino praised:

“On top of it being spectacular that the B team was leading after the first round, it was amazing that the B team hung on to 2nd place and beat J.J. Pearce by 1 shot. J.J. Pearce had a really good team, so it was really, really exciting and quite an accomplishment to have both teams qualify for the Region II tournament.”

Of all of the teams in district 9-6A, Jesuit Jesuit has dominated this district tournament in the recent years, capturing the district championship 7 out of the last 8 years since 2011. 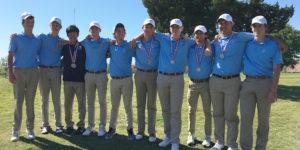 Both the Ranger A and B teams advanced to the Region 2-6A tournament on April 25th. Held at the Cottonwood Creek Golf Course in Waco, the two Ranger teams battled it out with some of the best in Texas.

Senior Luke Harrison led the Jesuit B team to an impressive run in the Regional tournament. They ended up placing 8th out of the 16 teams that attended, but still had a great time at the tournament:

“It was a great experience in which our team bonded and grew closer together. It was also really cool to see our top team advance to the state tournament.“

The Jesuit A team overcame an 8-point deficit after the first round to shoot the lowest round of the tournament and tie Houston Memorial for 1st place. Forrest Park once again led the A team to their impressive finish, scoring a 144 and second place overall. Because the Jesuit A-Team tied with Memorial High School of Houston after the two rounds, they went to a playoff to determine the champion.

The Rangers fell short on the first hole, but still qualified for the state tournament by placing in the top 3 teams in the region. Coach Marino always strives for victory but still took many positives away from the Region II tournament:

“I wish we would’ve played the playoff hole a little better, so we could’ve been regional champions, but it was really a great tournament. They played really well especially down the stretch with all the pressure on them. They did a really good job, and I was proud of the way both of the teams played.”

Jesuit’s district and regionals teams are predominantly made up of upperclassmen. Carson Cusick ‘20, the only underclassmen to qualify for the regionals tournament, has looked up to these juniors and seniors as the leaders of the golf team:

“We had a lot of fun just having all of the guys there and having both teams there was really fun. And it’s sad that the seniors are leaving because we were all very close to them, and it’s like losing a huge part of our team. I can only hope that the other sophomores and I will be able to do as good of a job as they did this year.”

The A-Team will be competing in the Texas 6-A State Championship tournament on May 14th and 15th. Located at the Legacy Hills Golf Course in Georgetown, Jesuit will be one of only twelve teams across the state that qualified for the tournament.

Stay tuned to the Jesuit golf website and The Roundup for updates on the Ranger golf team.