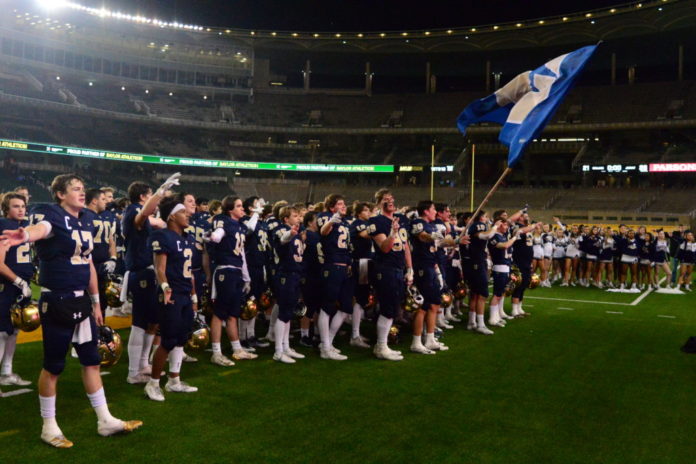 A YELL, A YELL, A GREAT SENSATIONAL YELL.

AND WHEN WE YELL, WE YELL LIKE HELL AND THIS IS WHAT THE HELL WE YELL:

And fight the Jesuit Rangers have this playoff season. They fought Lakeview Centennial for their 45-14 win over Lakeview Centennial in the first round, then fought to stun the defending State Champion Longview Lobos in a 27-25 victory the following week. But last Friday, the Rangers fought to make history.

On Friday, November 29, Jesuit defeated Klein Collins High School 28-21 at Baylor’s McLane Stadium in the Semifinals of the Texas 6A D2 football playoffs and secured the first third round playoff victory in Ranger football history.

A comprehensive recap of the game can be found at JesuitRangers.org and the play-by-play can be found at Maxpreps; this article features exclusive coverage of player commentary on last week’s game.

Jesuit vs. Klein Collins Pictures
1 of 43

The Ranger offense started the game with a 91-yard drive, which E.J. Smith ’20 topped off with a nine-yard touchdown run to put early points on the board. The Ranger defense immediately forced a punt from Klein Collins, which led to a 95-yard touchdown reception from Smith and a PAT that put the Rangers up two touchdowns late in the first quarter. Klein Collins responded with a quick touchdown, the Rangers leading 14-7 to start the second quarter.

Linebacker Tommy Roy ’20 commented on the defense’s first quarter performance, “We set the tone early the game by holding [Klein Collins’] offense on their first drive. Our defense was solid throughout the first quarter, with the exception of a few plays, and it helped set the offense up for some crucial scores.”

To start the second quarter, both teams led several unsuccessful drives, before the Rangers forced a punt mishap that gave them the ball on their own three-yard line. Smith punched in a touchdown run to give the Rangers a 21-7 point lead.Looking to cut their 14-point deficit, Klein Collins mustered a final drive, but the Jesuit stopped their drive before halftime.

Regarding the Rangers’ first half performance, QB1 Rance Holman ‘20 explained: “Our strong start gave us a cushion that helped the offense play with confidence in the second half. Both sides of the ball played well, especially the defense holding them to 7 points. At the half, we looked to continue our momentum into the third and fourth quarters and seal the deal.”

After the Rangers and Tigers traded turnovers, the Tigers were the first to score in the half. The Rangers drained valuable clock time in the third quarter and lead by 21-14 points going into the fourth quarter.

Klein Collins went on to close their gap in the fourth quarter, piecing together a lengthy 15-play drive to tie the score at 21. The Rangers offensive answered with a breakout screen pass Holman connected to receiver Christian Allocco ’20 for a 37-yard gain that landed the Rangers in the red zone. Smith finished the drive off with his fourth touchdown of the night, and the extra point sealed their 7 point lead. After a final attempt to stay in the game, Defensive Back Robert Fitzgerald ’22 sealed the Rangers’ fate with a game-winning interception that sent the crowd into frenzy.

Receiver Wyatt Garrett ’20 commented on their offensive performance, “Running the clock down in the second half helped us keep our momentum throughout the game. The crowd really helped pump the offensive on our touchdown drive in the fourth quarter, which ended up sealing the game in our favor.”

Defensively, Defensive End Austin Wood ’20 explained: “the important thing was that we made big plays when we needed to and were able to squeeze out the close game. I honestly don’t think it was our best performance, but our defense played well as a unit in the second half.”

Offensive Lineman Gabe Morales ’20 expressed his pride for: “We had great effort and energy and practiced hard all week, and our preparation showed when we came out with a victory.”

The Rangers look to carry their winning streak to Houston’s NRG Stadium, where they face Houston’s Westfield this Saturday, December 7 at 6:00pm.

Offensive Lineman Jacob Phillips ’20: “We had a good week of practice, and we feel prepared and confident going into the upcoming game. We’re excited for the opportunity to play in the state quarterfinals for the first time in Jesuit history. Go Rangers!” With that, stay tuned to The Roundup for more coverage of Jesuit football!