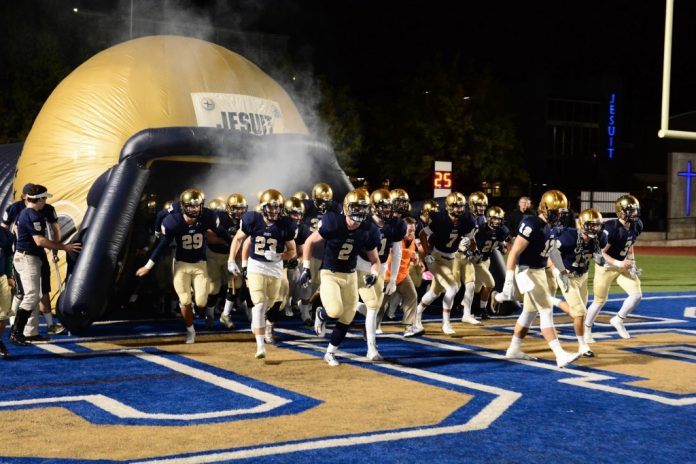 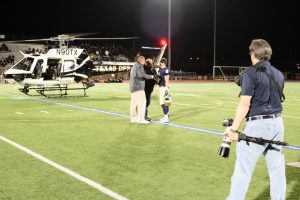 Descending from the sky and landing in the center of the field this past Friday Night, November 6th, was a Texas DPS helicopter, delivering the game ball for the Jesuit Rangers final district game of the year.

On an action-packed day for the Jesuit community, a win from the Rangers on Homecoming was the perfect way to cap off the night.

Headed into the game, the Rangers had already clinched the top seed in District 9-6A, but a win versus RL Turner would give Jesuit a perfect record in district play. Head Coach Brandon Hickman said, “Winning the district championship means a lot to our program and that’s our goal every season.  It’s hard to go undefeated during district play and it says a lot about our kids focus, intensity in practice, and positive attitude each week.”

The Rangers set the tone early in the game by jumping out to a monstrous 36-0 lead in the first quarter. It was the seniors who in their last district game set the tone in the game. Senior receivers Rusty Landon and Connor Lanpher both hauled in receiving touchdowns, and senior running backs Adam Holtz and Max Loughborough both found the end zone on the ground, Holtz twice and Loughborough once.

The Lions defense couldn’t contain the Rangers offense who dominated in the first half. 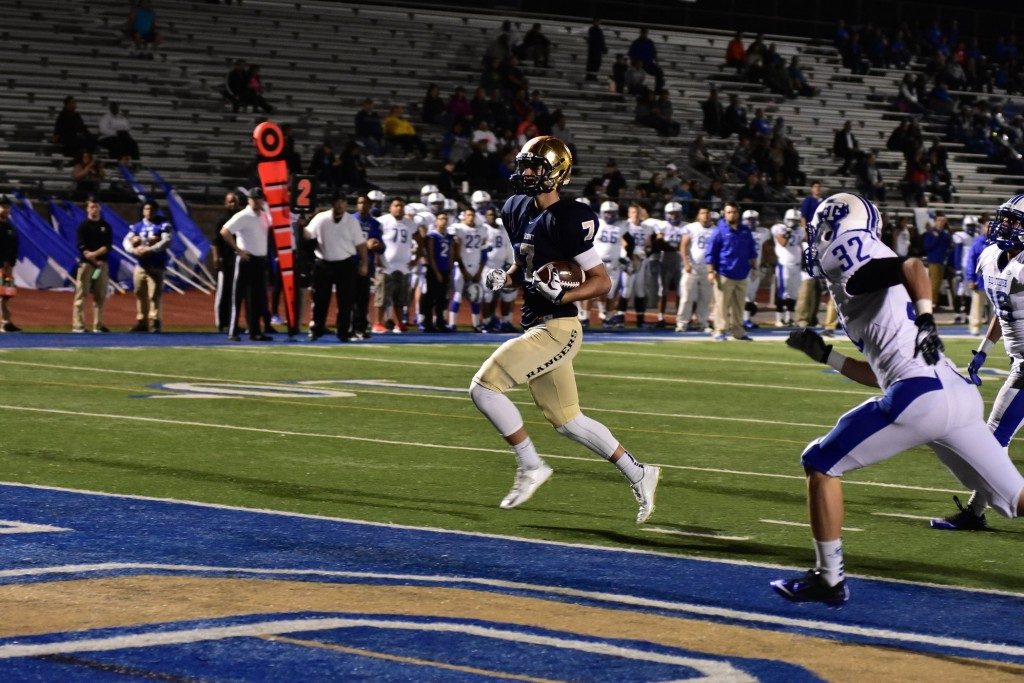 The Rangers defense also dominated in the game especially in the first half. Senior Austin Koehler, who sat out for most of the year with a wrist injury, was able to come up with a huge first quarter interception that gave the Rangers great field position leading to an easy touchdown.

Both the offense and defense have really been clicking for the Rangers all season long, and defensive end Jordan Rice ’17 said, “We have really found our element as a whole and are able to work as a unit. This gives us the ability to force turnovers and make big plays which gives us an advantage over our opponents.” 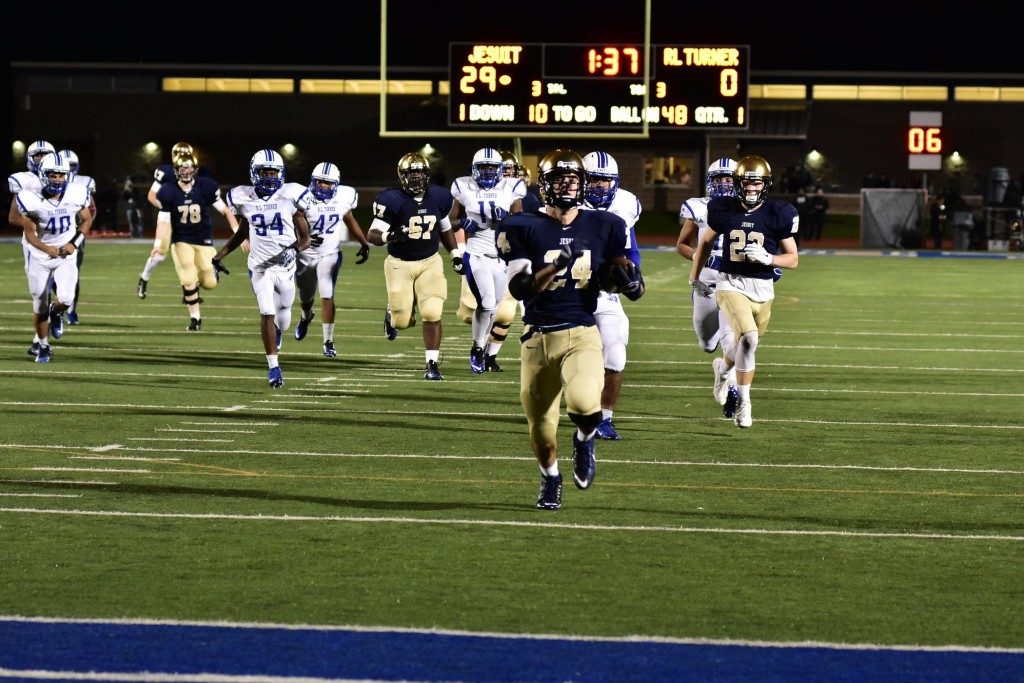 Coach Hickman also said, “I feel like our team has improved every week and we are peaking at the right time headed into postseason.”

The second quarter was a similar story for the Rangers as they extended their lead 46-0 headed into the half with a run from junior Evan Jackson and a kick from senior John Wengierski. Jackson, who leads the team in rushing touchdowns on the year, said, “It makes it easy to score when the lineman create such huge holes to rush through. They are the ones putting in the hard work and without them we would be much weaker.” 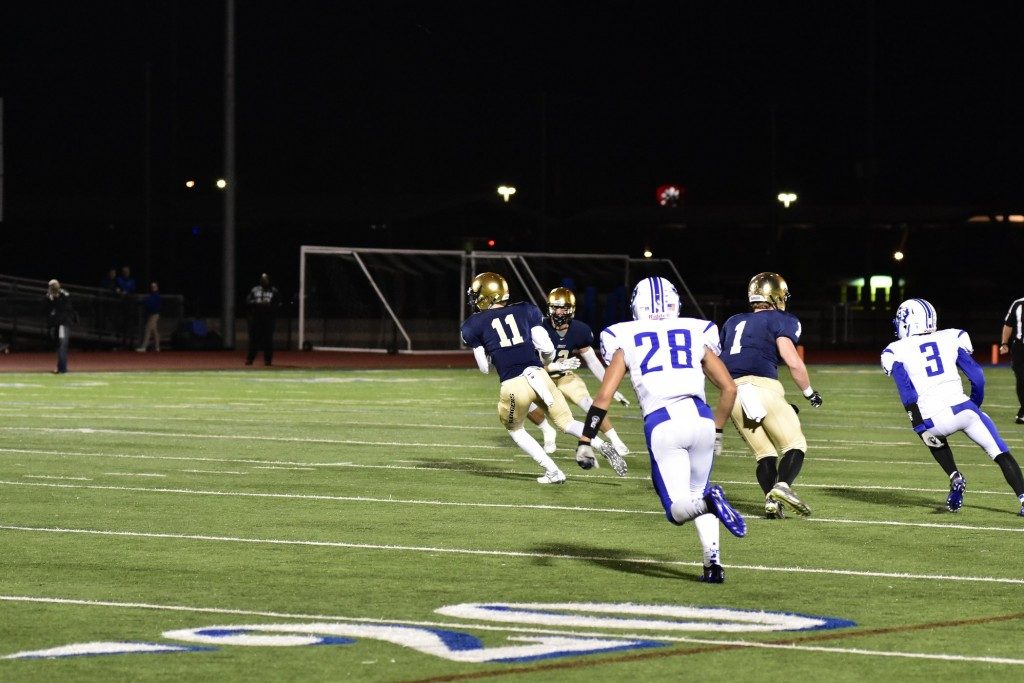 The Rangers closed out the Lions and ended the regular season, but they look to keep their winning streak going as the face Mesquite John Horn in the first round of the playoffs. Coach Hickman said, “I feel good about our team heading into the playoffs with the momentum we have.  The playoffs are all about getting hot at the right time, taking care of the ball offensively, and forcing turnovers defensively.  Our guys are ready and have worked extremely hard for this opportunity so now it’s time to go have fun and enjoy the moment.  It’s always an exciting time of the year and great to have the first game with home field advantage.  This will be our second year to host a playoff game and Postell Stadium will be packed Friday night.”

The Rangers are serious contenders as they finish the season ranked 9th in the area by SportsDayHS. They have proved their abilities and look to make a big run in the playoffs.

Make sure to come out this Friday as the Rangers take on Mesquite John Horn at Postell Stadium in the first round of the playoffs! 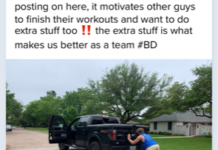 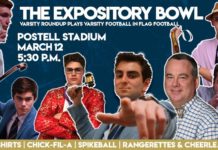