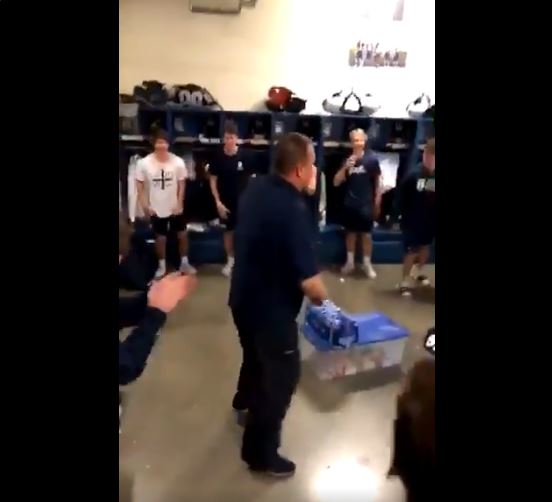 Shortly after Thursday film session for the varsity football team, Coach Hickman recalled a past experience where he had to do the Soulja Boy dance after his defense put on a shutout.

He challenged this years defense, under new defensive coordinator Don Woods, to put up a “goose egg.” This references how the 0 on the scoreboard resembles the shape of an egg. His goal for this challenge was to inspire his defense and simultaneously have some fun; for if they accomplished the task, he swore to once again perform the dance postgame in the locker room.

Coach Hickman also informed coach Woods about the challenge. This resulted in defensive coordinator Don Woods swearing to do the “dirty dog” if there was a shutout. This mystified just about every player on the team while also drawing their attention.

Friday’s game was rescheduled to the following morning, and Jesuit’s defense knew it needed to stay focused overnight. No one wanted to miss out on witnessing the dancing prowess of the coaches.

Playing stout defense Saturday, including an interception by Houston Hummel ’20, multiple sacks by the defensive line, and a gigantic hit by Zach Pendola ’20 that energized the sidelines, Jesuit came out on top by score of 42-0.

In the postgame huddle, Coach Hickman reaffirmed his commitment to the dance, staying true to his word. As the team unpacked, both coaches patiently sat outside the locker room until the music started, and madness ensued.

Coach Hickman’s strong effort to perform the dance had everyone recording and ended up on Twitter, drawing close to 4,000 views. It’s also currently on the SportsdayHS twitter page. In the video, while Coach Woods lightly dances off to the side, we get to see the stylish moves displayed by the former offensive lineman, which were impressive to say the least.

@CoachBHickman: “If you guys pitch a shutout, I’ll do whatever dance you want” pic.twitter.com/McZHw5Sknp