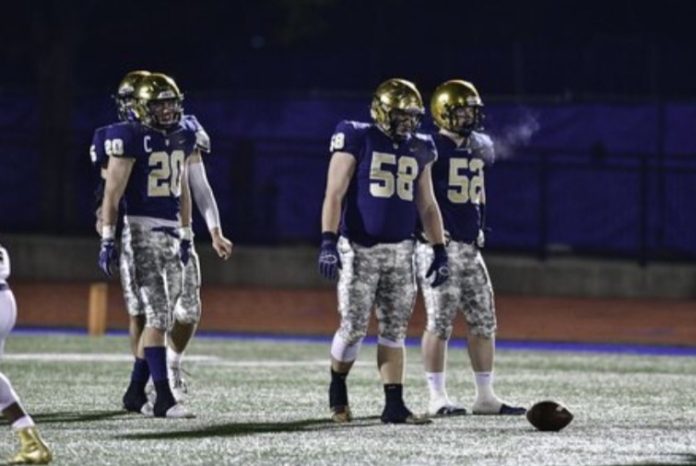 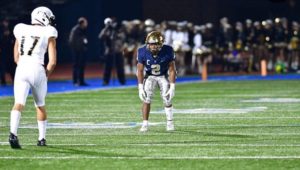 “Freedom and brotherhood service and friendship…” The faces of the players lit up with smiles as the beloved alma mater was played by the Jesuit-Ursuline Ranger Band. The Jesuit flag waved back and forth and was thrusted into the ground as the song came to an end. The Jesuit Rangers finished off the regular season with a glorious 41- 34 victory against Plano East. This is the first time Jesuit has beaten East since 2014, and the victory gives Jesuit one last home game this Friday against Lakeview Centennial in the Bi-District Championship. Here is a breakdown of how the Rangers defeated the Panthers. 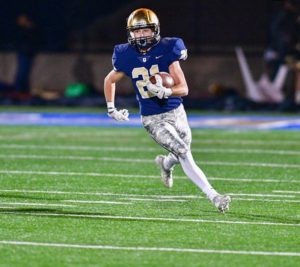 There were many stellar performances on the offensive side of the football. Led by the renowned QB1, Rance Holman ‘20, the Ranger offense amassed 318 yards and 6 touchdowns. The dual threat quarterback had 130 passing yards and 96 rushing yards. Holman started off the game with a 3 yard touchdown run and a 14 yard touchdown pass to Christian Allocco ‘20. That’s not all though. He also managed to run in 2 more touchdowns in the second quarter. The phenom quarterback has been recognized as the Ranger of the Week due to his exceptional performance last Friday night. Holman said “I am very grateful for the recognition, but I wouldn’t be able to do it without my offensive line.” After going scoreless in the third quarter, Jhalen Spicer ‘20 sparked the offense by returning a kickoff for a whopping 74 yards, giving the Rangers optimal field position. When asked about the return Spicer said “I felt like I was flying.” Jake Taylor ‘21 then punched in the touchdown from the 1 yard line. He finished the game with 78 total yards. Taylor would also score later in the fourth quarter to put the Rangers ahead by a touchdown with 6 minutes left in regulation. The 7 point lead was just too much for the Plano East Panthers. The offense showed out on Friday night and got the job done.

The Ranger defense also had a spectacular night. They were able to force turnovers and stop the Panthers in their tracks when it mattered the most. In the first quarter, Jack Barton ‘20 made a diving catch to intercept Plano East’s quarterback.This interception set the tone for the offense who would score again, increasing the lead to 14-0. Barton would finish the game with 9 tackles along with the interception. Ford Buckner ‘20 also had a night for the defense. He had 8 tackles, 2 tackles for loss, a sack, and a forced fumble. Unfortunately, the forced fumble was recovered by Plano East, but it set up 2nd and 37 for the Ranger defense. The Panthers were only able to score twice in the first half because of the superb defensive effort. Playing safety for the first time, Chase Walker ‘20 would also have a pick in the third quarter. Turnovers were a very important factor in the game and the Jesuit defense helped produce 2 of them. Tackles are also a vital component in the game of football. Tommy Roy ‘20 had 15 tackles, a season-high! Roy said that “It was a team effort. We all worked together for this win.” A very humble response from the senior linebacker. In the end, the Ranger defense was able to stop the Panthers on their final drive in order to seal the victory.

Inspired by Will Garoutte ‘20 and authorized by the coaches, an ogre mask made its rounds on the football field. Many schools may have a turnover chain or a turnover bucket to celebrate turnovers. Jesuit has a Shrek mask. Hopefully, the Jesuit Rangers will protect the swamp (Postell Stadium) and will wear the bright green mask again next Friday. As for the regular season, it’s all ogre now. Welcome to the playoffs.