NewsPaperThe Student Voice and Newspaper of Jesuit Dallas since 1942
Sports Crew What does a Coxswain in Rowing Do?
Facebook
Twitter
Email
Print 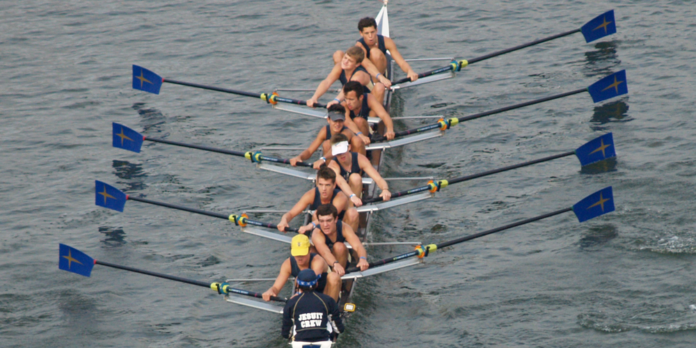 If you have ever watched any rowing regatta, you’ll always be able to see eight gigantic men and women powering the boat to the finish line. However, if you take a closer look, you’ll notice a much smaller person in the back of the boat that happens to be the only one not rowing. What could possibly be the point of carrying the weight of a person that isn’t even rowing? This is a Coxswain, and their role is much more important than it looks.

What do they do?

The position is not only important, but it is also difficult. Most people’s knowledge of the position is that they simply chant “row” and do nothing else, however, they are most certainly wrong. Because the coxswain is the only person in the boat that actually faces the direction that the boat moves towards, their job is not only to coordinate the rhythm and power of the rowers but to also steer the boat.

Rowers can hear the coxswain speaking as they have a microphone that connects to the boat’s speakers. Also, they are able to steer by using a handle or strings that connect to a fin at the bottom of the boat. Head Coach of the crew team, Randy Dam, was a coxswain in college, and stated that ”The most difficult aspect of being a coxswain is juggling all of the countless responsibilities they have, at once”.

During races, Coxswains not only make calls on the power and rhythm of the rowers, but they also motivate the rowers to help boost confidence in the boat. They also have to check where the other boats are in contrast to their boat, and they must make sure they are giving the other boats space, or else their boat is penalized. Freshmen rower Garrett Theisen ‘22 stated that “The Coxswain is like the driver of the boat.” Another rower Nico Yepes ‘22 stated that “When you are in the boat pulling as hard as you can, the Coxswain is always there to push you through the pain.” Ultimately, the coxswain is the motor of the boat – not only motivating but steering as well.

Rowing teams value their Coxswain. Traditionally after a team wins the race, they throw the Coxswain in the water, celebrating an important contributor to their victory.

Check back to with The Roundup for more rowing and other sports news!