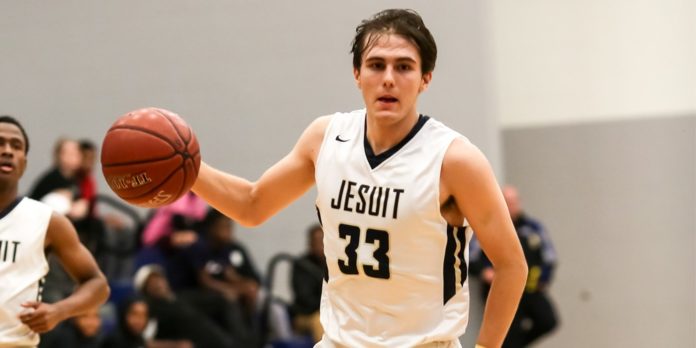 Another impressive week of Jesuit basketball comes to a close as the Rangers secure a great win in their fight for the division title. Despite a close loss against Prosper, student pride continues to flourish throughout the school, and the team’s recent success calls for a recap. 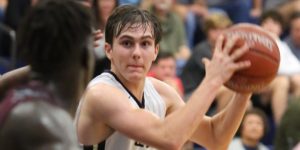 Kicking off the second school week of the second semester with a bang, the Rangers downright dominated the McKinney Boyd Broncos in a crushing 73-40 win. Despite kicking off the game with a sudden 8-2 lead thanks to Anthony Hollerich’s impressive three-point shooting ability, the Rangers struggled to maintain a lead as the Broncos, lead by Sean Radley, took control of the paint. The teams may have finished off the slow first half at a 14-14 stalemate, but the Rangers kept their heads up, kicking into high-gear upon the first possession of the third quarter. Sending a frightening message that the Jesuit boys were there to compete, the Rangers knocked down five three-pointers during a 38-3 streak that left Broncos fans hopeless in their defeat. As a cherry on top, Senior Julius Marble slammed down a monstrous dunk off of Gavin Perryman’s alley-oop, sending the student section into a frenzy. 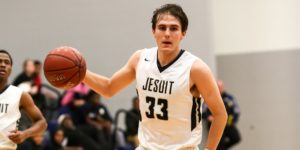 It seems that every Jesuit player took part in the Friday feast, with Hollerich leading the team with 19 points with a 100% free throw percentage. Both Abmas and Marble scooped up 12 points each, while Perryman racked up 9 assists along with his 11 points. With three-pointers raining down from seniors John Phillips and Connor Wilson, as well as a stunning 6 rebounds from junior Eli Steger, the Broncos truly had no chance. The team’s defense also ruled the court, holding their opponent to only one three-pointer.

A fantastic game for the Rangers, the win nicely complemented their 21-4 record and bumped up their division record to 6-1. 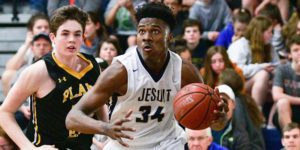 A Bump in the Road

Unfortunately, the following game ushered in a tough one-point loss for the Rangers in an overtime loss with the Prosper Eagles. Senior Anthony Hollerich pulled Jesuit ahead with an immediate eight-points to start the game, but once the Eagles had secured a five-point lead by the end of the quarter, the Rangers failed to overtake their opponents by the end of the half. The Eagles pushed farther ahead into the third quarter, gaining an eight-point lead due to three Jesuit turnovers. While defeat seemed a probable fate for the Rangers, the boys locked in during the fourth, as Abmas nailed a trio of three-pointers to close the gap. Taking advantage of their final minutes, the Rangers kept moving in, aided by a fantastic steal by senior Connor Wilson, his third of the game. Splashing both free throw attempts with less than a minute left, Hollerich secured a chance for a comeback during an intense overtime. 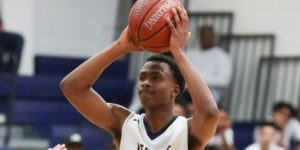 Scoring only during only the first and final moments of overtime, the Rangers suffered a 61-60 defeat. Despite the outcome of their battle with Prosper, the boys held strong, putting up impressive statistics, with Marble, Hollerich, and Abmas putting up 16-points each, and the team totalling 36 rebounds with the help of junior Darryl Brown.

Moving ahead, the Ranger’s set aside their loss against the Prosper Eagles, finalizing a 6-2 district record, and prepare to smoke the Allen Eagles in their upcoming Friday showdown. #LetzGoJezNation 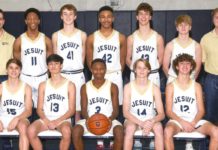 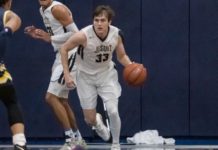