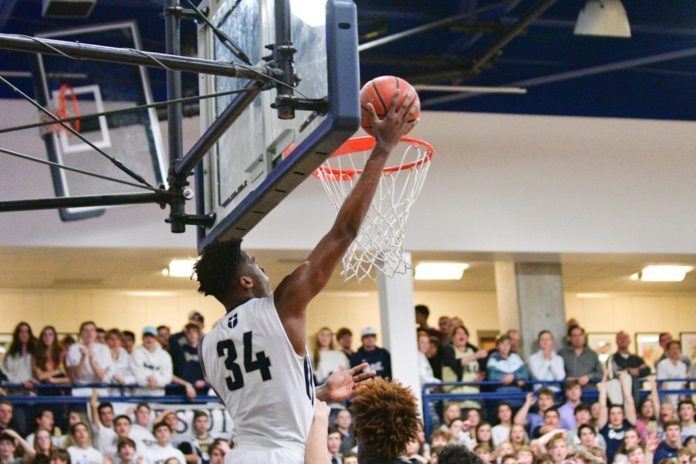 Throughout the season, Jesuit has played in many great games in which they dominated both offensively and defensively with their superior play. However, the game against Killeen Ellison on February 22nd definitely wasn’t one of these games.

Despite their sloppy play, the Rangers powered through this off night for them and still managed to secure the win, with a final score of 56-51.

The Rangers started off the game slowly, with only a free throw and a hook shot by Julius Marble ’19 in the first two minutes. They quickly heated up after, and with some sharpshooting by Anthony Hollerich ’19 and John Phillips ’19 along with dominance in the paint by Marble, the Rangers took a 17-8 lead.

In the second quarter, similar to their first playoff game, the Rangers were plagued with turnovers as sloppy passing led to six turnovers in this quarter. Out of the 13 turnovers for the Rangers in the game, nearly half came in this one quarter, which allowed the Eagles to come right back into the game. Still holding onto a lead, the score at half was 29-22.

Through some hustle plays by Marble, including a monstrous put-back dunk, Jesuit kept their lead in the third quarter as they were outscored 14-16 by Ellison. Only up by five going into the third, Jesuit had a very tight game ahead of them. 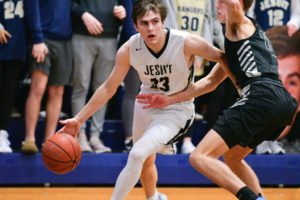 The fourth quarter contained a consistent back and forth rhythm, as for every basket Ellison scored, Jesuit would quickly answer. Solid defense on the perimeter led by Connor Wilson ’19 and Gavin Perryman ’19 helped to put pressure on the suddenly hot Ellison guards, but the game was eventually tied up with 2:52 left in the fourth.

With some hustle rebounding by the Rangers and a few made free throws, the game was locked up as the Rangers managed to hold onto their lead, winning 56-51.

Although the Rangers were able to win, they definitely allowed the game to be much closer than it should have been, as they easily could have beat Ellison by 20. The Rangers of late have been having problems keeping their passing under control, and the turnovers are allowing worse teams than them to keep the game close. 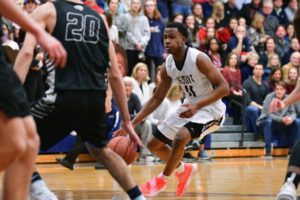 Also, in both playoff games, stud point guard Max Abmas ’19 has been struggling from beyond the arc, going 2-12 in the last two games. While he still is helping the team through his passing ability and his classic mid-range jumper, the Rangers tend to play much better when Abmas can help stretch the floor as he has earlier in the season.

However, from the other side of the three-point arc, Julius Marble is playing some of his best basketball with 22 points and 15 rebounds on Friday. It seems like Marble is improving in the paint with every game and his defensive skills continue to scare opponents driving towards the rim.

Coach Hill said, “We played a really solid game against Ellison. They did a really good job of getting back in the game after we got an early lead and I thought we responded really well. They really hurt us on the boards and they are known for their toughness. But I was really proud of how we finished the game, making a number of huge toughness plays ourselves. It was a great win.”

The Rangers’ next game is on Tuesday, February 26th, at 7:30. The game will take place at Allen High School, and the Rangers will be taking on South Garland in a rematch of last year’s playoff matchup. Be there to support your Rangers and #PACKALLEN to help keep the momentum rolling!