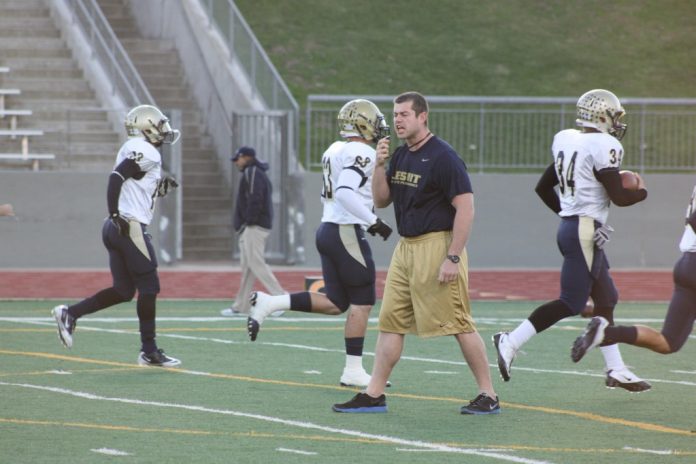 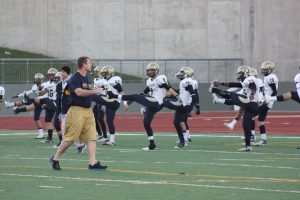 If you ventured inside the new three story athletic building, then you’ve seen an enthusiastic man yelling across the room at the dozens of athletes as he pushes them to a higher level of physical fitness, a facet of the profile of the Jesuit Graduate at Graduation. The man who does so is Coach Jeremy Weeks, the newly appointed Director of Athletic Performance since the beginning of the 2011 school year.

Born and raised in Witchita Falls, Texas, Jeremy Weeks was born on October 11, 1983. Weeks was a defensive tackle and tight end on the WFHS Coyotes and strong leader on their team.  After he graduated from high school, Weeks committed to play football at New Mexico State University, where he was a captain and standout player.  After he received his Bachelors in Kinesiology from NMSU, Weeks became a graduate assistant at Baylor University, working with the Bears’ golf and football programs.  In 2009, he received his Masters in Sport Pedagogy from Baylor and was promoted to Assistant Athletic Performance Director.

This past year, Coach Weeks was offered a job by Jesuit Dallas to become the new Director of Athletic Performance, adding to our newly constructed athletic facilities and stupendous athletic programs. After filing an application and completing the interview, he received word from Principal Michael Earsing a week before school started informing Weeks that he had been chosen for the position. As Director, Weeks oversees athletic training for all sports, ranging from lacrosse to hockey to swimming to football.

“Each sport has its own challenges every day,” says Weeks. “The students are sharp and on top of their business; they stay focused.  I really appreciate the job they give me every day to enjoy.”

Every day, Coach Weeks arrives at the weight room at around a quarter to six to set up for the daily workout with the assistance of Coach Dankyi, Leal, Lacey, and Heim along with two interns from UT Arlington who work with Coach Weeks to complete his daily duties as director.

In addition to his day job, Weeks married his wife Jency, who works with the cheerleading program at Jesuit, this past May, and they are expecting a child. Weeks says that every day is a new story and every athlete or person is a character in his book of life, a rather insightful approach to life.

On a final note, the energetic, colorful, and even crazy mentality and attitude that Weeks brings to all the sports teams at Jesuit helps them to work their hardest every day, making Weeks one of the most interesting and special characters at our school.