More
JesuitRoundup.org is brought to you by:
The Ashmore Family
News The Migrant Caravan: A Lesson in Empathy
Facebook
Twitter
Email
Print

At the beginning of this story, you have a choice. It is a choice that should be simple, but due to partisan machinations, has become near impossible to resolve. This choice has to deal with what the media has dubbed the “migrant caravan.” Your choice is how you react to these images of suffering. Do you accept the machinations or are you willing to push past them and examine the situation with compassion and reason? It is your choice; do you react to these people as a human being would or as a partisan would?

This caravan is comprised of several thousand people, mostly families who have walked thousands of miles through Central America in order to reach the US-Mexico border. Many of these people are seeking asylum, which is something they are legally allowed to do, and which simply requires them to reach a point of entry to the United States, such as the one at Tijuana, where some of them have recently reached, physically cross over at the point of entry and then request asylum. This journey is not an easy or safe one. This group has waded through rivers, suffered through the heat and their children have collapsed from exhaustion.

You may ask yourself, why would anyone do this? Why would anyone uproot their families and spend weeks walking through the rivers, forests, cities, and mountains? The answer to that question is simple. It is that, to these people, the very prospect of living in America, away from the violence and economic insecurity that plagues their home countries, makes it all worth it, despite the hatred and misunderstanding that they are facing here in America.

This does, however, raise the question of why do we, from our couches in Dallas, fear a group of unarmed families, a majority of whom are just sitting at the border at Tijuana? A group of roughly 7,000 people- a number that is so small that they could barely fill up the entire Jesuit football field.

The answer to this second question also is simple. It is because a handful of powerful political actors saw the possibility for political gain in reframing the group as an existential threat to America.

The truth is, this response was a political stunt. It was designed to make Trump look like a strongman and stoke fears about border security before the midterms. If you doubt this, just remember that this isn’t the first caravan to try and reach the border. There were earlier ones, but those didn’t come during an election season, so they didn’t matter to the narrative that the GOP was trying to push forward.

The caravan is not a threat to you or me, but that didn’t stop the GOP, Trump, and Fox from framing it as one. They were perfectly fine turning this group of migrants into images that invoke fear and loathing. They were willing to use spooky music, misleading captions and outright lies in an attempt to mislead the public into believing that it was not families seeking a better life that were coming, but that it was instead an invasion, led by members of MS-13 and “unknown Middle Easterners.” This narrative is, of course, composed of lies, as shown when Trump himself admitted that he had no evidence for the claim that there were “Middle Easterners” in the caravan.

This can be seen in crime rates, which show that immigrants, even undocumented ones, commit fewer crimes than the native-born population. This isn’t from a “liberal source”, but instead comes from the libertarian Cato Institute, who published a study this year that states that “As a percentage of their respective populations, there were 56 percent fewer criminal convictions of illegal immigrants than of native-born Americans.”

The current political environment is one founded upon fear. It is an absurd nightmare-theater where we are willing to take even the cruelest of actions, such as separating children from their parents or firing tear gas at toddlers, in order to defend ourselves against fictional threats. We, however, must reject this hyper-securitized environment and instead focus on the reality of the situation, which is that there are people fleeing violence who will die if we send them back. 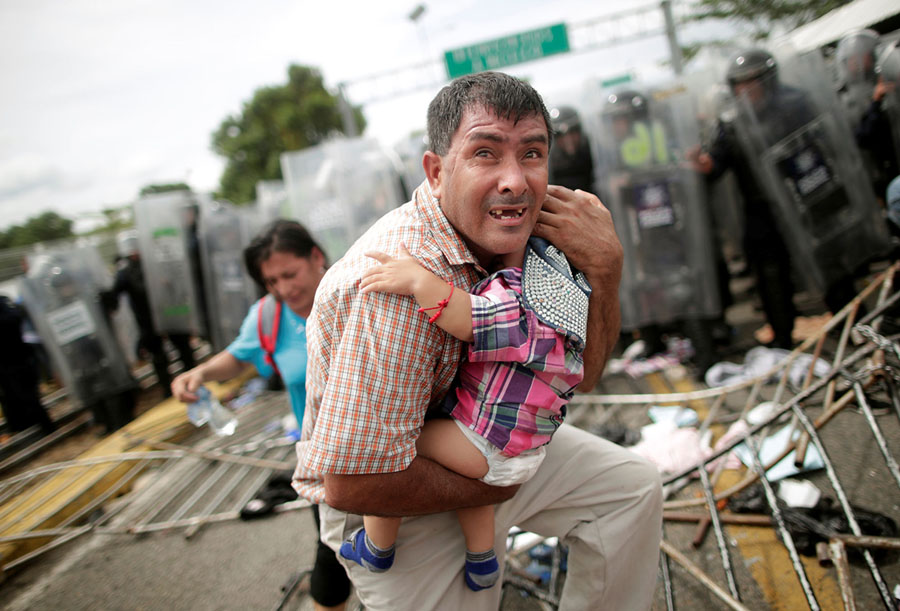 A Honduran immigrant protects his child after others, part of a caravan trying to reach the U.S., stormed a border checkpoint in Ciudad Hidalgo on October 19, 2018

Now, back to the choice from earlier about how to view these migrants. If you choose to view them as fellow human beings, regardless if it is because of a belief in the innate dignity of the human person or if it is because of some kind of cosmopolitan ethic, you will treat these people with kindness, not fear. You don’t ask the question “how do I get these people away from me?”, but instead ask the appropriate question, which is “how do I best alleviate this suffering?”

At the end of the day, we are not Republicans or Democrats. At our most fundamental level, all that we share is a common humanity. As humans, we experience empathy when we see others in pain. In the case of the “caravan”, we should feel empathy for them, for the suffering they are fleeing and the harsh conditions that they are undergoing to escape it. We have an obligation to help them because if we do not, they will most likely die.

The warped picture we are currently seeing, where Customs and Border Patrol officials are firing tear gas at women and children and the President and Homeland Security are threatening to close the border in order to “ensure public safety”, represents the exact opposite. It speaks to how ideology, partisanship, and hatred have so readily consumed our leaders. This is what should scare you, not the brown faces on your television screen.