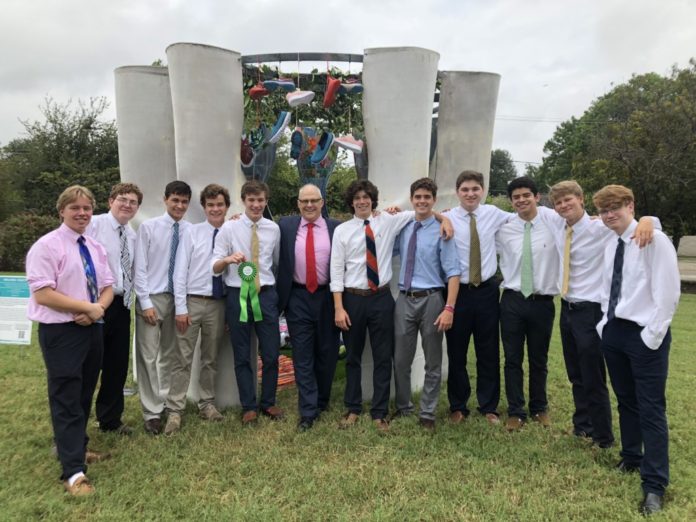 Every fall, following the High Holy Days of Rosh Hashanah and Yom Kippur, millions of Jews around the world observe the Sukkot holiday. The Sukkot, or Feast of Tabernacles in Hebrew, commemorates both the harvest feast in Ancient Israel as well as the Exodus of the Israelites from Egypt. In modern times, Jews around the world celebrate this holiday by building huts known as a sukkah, covered in branches and decorated with seasonal and religious imagery. The sukkah’s construction commemorates God providing for the Israelites in the desert after the Exodus. In many cities with large Jewish populations (like New York and Toronto), communities hold festivals to build sukkot (the name of the holiday, and also plural for sukkah), often with artistic flair, and they are put on display for all to see. 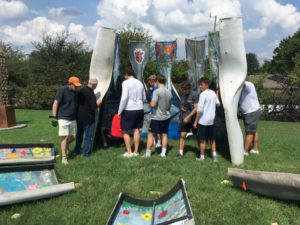 This September, Dallas held its inaugural sukkah festival, called The Sukkah Project, put on with help from the Jewish Federation of Greater Dallas. People constructed their own sukkot and entered them into a contest to be judged. Entries came from all over the region, as well as from international participants, including participants from as far away as Greece. One of the many entries in The Sukkah Project came from right here at Jesuit Dallas.

Jesuit’s sukkah was constructed with the help of 83 students and 22 artists experiencing homelessness, brought in from the Stewpot and Incarnation House. In addition, members of the Mayor’s Rising Star Council and students at the College of Architecture at UT-Arlington contributed to the project.

Reflecting on the theme of providing a shelter to those in need, homelessness became the central theme of Jesuit’s sukkah. Artists from Stewpot and Incarnation House covered the walls of the sukkah with moving messages and imaginative illustrations. The walls themselves were constructed out of a concrete roll, a material that hardens when it gets wet. Contrasting from the hardened walls, nature and human necessities surround the sukkot. 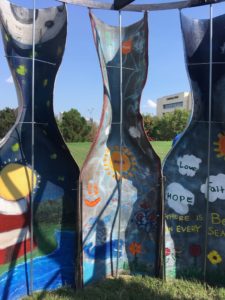 Colton Zink ’20, who participated in the construction and design of the sukkah, enjoyed the experience of working with the homeless to create a piece of art. “It was a really unique opportunity and it was awesome to see the spirit of cooperation between all of us,” he remarked. “We built something really beautiful, for a good cause.”

Jesuit’s sukkah was put on display at the Biblical Arts Museum, where Jesuit students helped to construct the structure on site. While the sukkah wasn’t initially chosen as one of the top ten sukkot entered into the festival during the exhibition on September 20, it was chosen for a special award by the Mayor of Dallas, Mike Rawlings. The following day, 12 Jesuit students and some faculty attended the festival’s Interfaith Luncheon, led by a number of civic and religious leaders from the Dallas area. There, Jesuit received the Mayor’s Choice Award. 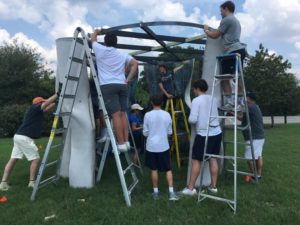 Reflecting on Jesuit’s participation in this memorable event, Mr. Rich Perry, Director of Community Service, said, “‘Walking Together’ pushes further the notion of ‘walk in my shoes.’ Jesuit’s sukkah was constructed to inspire us all to work in our communities to help those who lack shelter. Our goal was to create a unique opportunity for those experiencing homelessness to work with our students in designing and decorating the walls together and to therefore telling the story of their journey through the features of this sukkah.” He praised the help of Ms. Ellen Bruce and Mr. Keith Reese in this extraordinary project.

Jesuit’s involvement in this event perfectly encapsulated the role the school seeks to play in the community and its strive to serve others and work towards justice, particularly those who are marginalized and in need. Mr. Perry noted that he hopes Jesuit is able to take part in more “exciting initiatives” in the future.