It’s nighttime and the city lights dimly illuminate the mountains as the plane descends.  Rushing through Customs, the officer stamps the student’s passport to mark the beginning of their international journey.  For seven days over Thanksgiving break, eleven adventuresome Jesuit students embarked on an exchange trip to Guadalajara, Mexico for the first time in nearly a decade. In Guadalajara, students stayed with host families and attended classes at Instituto de Ciencias, a Jesuit school in Mexico.

Motivated to experience a different culture, help the local community, and improve language skills, the adventurous eleven were in for a once in a lifetime experience.  “I love Mexico,” remarked senior, Giovanni Rivas.

“I’ve been raised in a Mexican household and have grown up loving and living the culture, the country, the people, so this trip was an opportunity to experience the country I love so much through a perspective other than the usual family vacation.  It was a chance to learn more about Mexico in a way only this exchange program could provide, the experience of being a student in Mexico. I hear my parents talk about their experiences as students in Mexico, and now I could, even if for only a very short time, get a glimpse of that experience,” added Rivas. 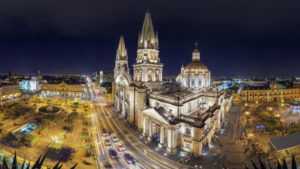 For the trip leader, Mr. Perry, the goal going into the immersion experience was to “foster very real connections with our Mexican brothers and sisters and that we could establish genuine friendship and a sense of solidarity.”  Throughout the week Jesuit students deepened their relationships with their host families, new friends, and the community.

After stepping through the gates of customs and immigration, the generous host families happily welcomed their new American sons with signs, hugs, and an official school t-shirt.  That night, students began to get to know their new family and their “twin” or host brother, whom they would shadow during school.  Immersed in a new country, school and culture, the Jesuit students prepared for a week of cultural exploration, language acquisition, and traditional Mexican food.

In order to begin to fully experience Mexican culture, students followed the normal school day of their “twin” while staying in Guadalajara, including waking up early to drive to school or staying late for sports practices.  For freshman Santiago S., “Just getting there and meeting our host family and going to school there,” was his favorite part of the trip.

Throughout the entire trip, students were in the hands of their respective host families.  “They were extremely welcoming,” noted senior Alexander Bryan.  He continued: “My family had four sons, but one [of which] was out of town so I just got to basically be the fourth brother for a week,” genuinely immersed into a new family structure.

Outside of the home, students experienced the normal school routine, attending junior-year level classes at Instituto de Ciencias.  “Classes were so different,” remarked junior Reed Zimmermann.  Drawing a comparison with Jesuit he sentimentally recalled: “The students were rowdy and it was way more fun and relaxed.”

The general energy of the classroom was always high, and the students were tight-knit and easygoing. For Michael Miramontes ’18, “What stood out to me was how they had much larger classes, about 34 each [and how they] stayed with the same class for 2 years,” creating a close community of students.

While students grew accustomed to a different schedule fairly easily, the language barrier was a both fun and frustrating challenge to many.  “I didn’t really understand what was going on; it was kinda hard to start conversations,” remarked Kota Ueshima ’19.  Luckily, “most of the Ciencias students spoke English, so [communication] wasn’t a problem” recalled Miramontes.

Simply put, for those learning the Spanish language, it was a challenge.

In Zimmermann’s experience, “Learning a new language is really hard. There are so many words and it can be frustrating to see everyone around you speaking Spanish so effortlessly while you’re struggling to keep up. But I could hold conversations with people. Everyone was super nice and supportive, without exception. I definitely improved my Spanish, and my Spanish is definitely in need of continued improvement, but it was an amazing experience.”

During the school day on Friday, Jesuit students and their host-twins traveled to a small Catholic nursing home in the city to celebrate the 100th birthday of resident, Rosita.  “I thought that our program at the nursing home was a moment of grace in which we could see God,” commented Mr. Perry.  During the visit, after enjoying birthday cake with the residents, students gifted the ladies warm socks and hats to accommodate them for the winter without a heating system. 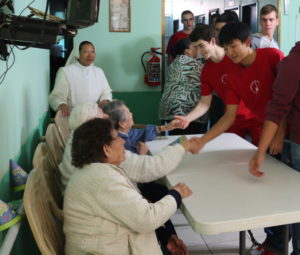 Mr. Perry continued: “It was a moment of our students engaging in a very authentic encounter with people who are marginalized and in doing so in the company of their Jesuit brothers not only in Dallas but also their Jesuit brothers from Mexico.  To me that was without a doubt the most impactful moment.”

When the school week ended, students spent the three-day Mexican Revolution weekend experiencing the culture through their host families.  Students visited the neighboring towns of Tlachepaque, Tequila, Puerta Vallarta along the Pacific and even a traditional Mexican wedding.

When asked about his experience at his first Mexican wedding Ueshima noted, “It was a new cultural experience, everyone’s dancing.” He continued, “you kinda just dance, and dance–there’s dancing for like 8 hours.  There wasn’t much talking, only dancing, but it was a fun experience.” 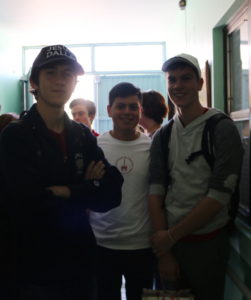 Recalling the long-weekend Miramontes ’18 added,”My favorite part was probably hanging out at one of the student’s houses with a few of the other guys, just relaxing and playing Xbox and watching the Cowboys game. I guess what I enjoyed was how it felt so close to home yet I was so far away from it, and experiencing it with students I had only met that week.”

Throughout the week more than anything else, students forged strong friendships.  “My most meaningful experience was saying goodbye to everyone at the school on the last day. In a matter of 1 week, I had already made some great friends, so saying goodbye was difficult,” said Bryan ’18.

Having the chance to live in Mexican culture was a surreal experience for most students, an opportunity to immerse themselves in a different community and broaden their worldview.  While the Jesuit students had to part ways with their families after only one short week, the connections made will last forever and many of the host-twins will be traveling to Dallas in the spring to experience life in our school, Jesuit Dallas.