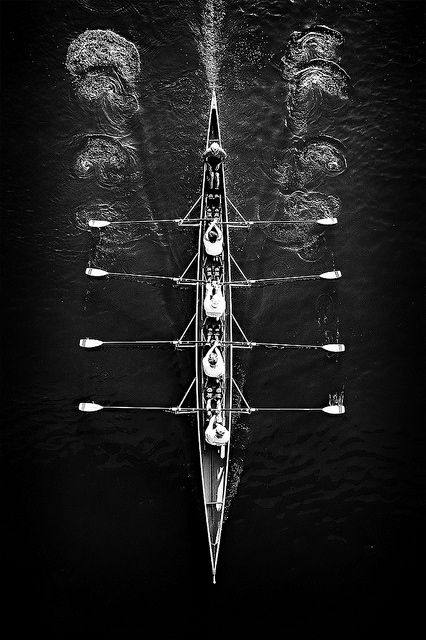 Gently down the stream

Life is but a dream

Crew must not have been a sport when this nursery rhyme was written. The poem could not have been further from the truth for the Jesuit Dallas Crew experience at the national Stotesbury Cup Regatta. 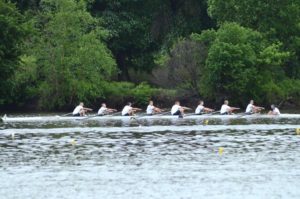 On May 18, Jesuit sent 3 boats to this high-profile regatta in Philadelphia, Pennsylvania. Because it was stormy in the city of brotherly love, the race was moved to Cooper River Park in Camden County, New Jersey the following day. The three boats were: 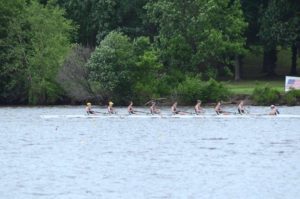 Jesuit’s top varsity boat competed in the ‘Senior Eight’ division, among the top boats from high schools across the country. Of the 38 senior boats competing in the regatta, the Rangers placed 10th with a 5:20.210, earning them a spot in the semifinals. The top boat shaved an astounding 27 seconds off of their initial time with a 4:53.060, placing 3rd among the 6 boats in their semifinal. Though the Rangers put up a good fight, only the top 2 boats from each semifinal advanced to the finals.

“Racing this year was tough with half of the top boat being constantly filled with underclassmen. We had a couple of learning curves along the way. In the Varsity 8, we learned what our biggest weakness was and came back with a taste of bitter defeat. With this, we are making modifications to the boat for the next race, and we have a hunger for revenge on the teams that beat us at Stotesbury. Nationals is the race where I, along with the other seniors, will end the season on a high note in order to create a lasting legacy.”

Matthew Sorenson ‘20 was one of the two sophomores to compete with the top boat throughout the year and after their Stotesbury finish, commented:

“I mean the team as a whole performed pretty well, especially the freshman with their second-place finish. The varsity did decently; the top varsity boat was capable of doing much better, but we hope to improve for nationals in two weeks. I’ll definitely miss the seniors on the team and it’s been a nice year with the new coach and a very smooth transition.” 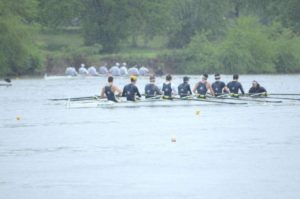 The second varsity boat competed in the ‘Second Eight’ division against the second boats of other competitive high schools. In the preliminary race, they placed 6th out of the 23 competing boats with a 5:46.340. In their semifinal, they shaved off over 43 seconds with a 5:02.970, placing 3rd of the 6 boats in their group. Because the top 3 boats from each semifinal advanced to the finals, the Rangers earned a spot by squeezing Chaminade High School out 0f their spot by 0.590 seconds. Though they placed 6th in the final race, it was still an impressive run for Jesuit’s second boat. Sophomore Nash Crawford ‘20 relished:

“Being in the second varsity 8, we did extremely well. The first two races we had were in extremely difficult conditions, making the rowing not very enjoyable, but we did a great job of handling what we had to deal with. We were able to make the semifinals of our race and advance to the finals by .2 seconds. Going into the finals, there was a small margin between 1st and 6th. Unfortunately, we got the sixth place, but were extremely proud of the way we rowed. That was by far the best race of our year for everyone in the boat. Being one of the youngest boats with 5 sophomores out of the 8 rowers, we are definitely excited to see what is to come in the next two years.” 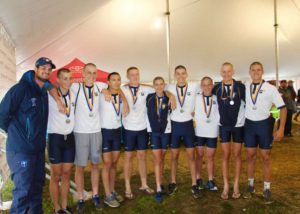 The Freshmen perhaps had the best performance of the three Jesuit boats in the Stotesbury Cup. Thirty-six teams competed in the Freshman Eight division, six of whom would advance to the finals, skipping the semifinals altogether. The Rangers squeezed out a 6th place finish by 0.2 seconds, advancing to the finals with a time of 5:15.080. The Freshmen ended up dropping 3 seconds from their preliminary race to take home 2nd place overall. The freshman stole the hearts of the Jesuit crew community with their stellar performance, as senior Sean Tehan praised:

“For the younger boats, it was great to be able to see them put out some of their best racing yet. Our freshman really blew us away with bringing home a silver medal for the first time in a decade. And I think our second varsity boat was really able to tighten up and put out their best performance. The future of Jesuit crew is surely a promising one.”

Though their Jesuit experience has come to a close, several seniors from the crew team have elected to continue rowing in college:

The senior class shaped the culture of the Jesuit crew team, one that has attracted 24 freshmen to join this year. Nash Crawford voiced his thanks to the graduating class:

“This senior class was a very special one. They are the class that was able to take our small Dallas team all the way to the Henley Royal Regatta. All the seniors, even the ones that didn’t row in this last race, influenced the team in their respective ways and made the entire season a great one. The leadership brought by all of them will be missed greatly next season.”

He also went on to express how this season was also shaped by the leadership of first-year coach Randy Dam: 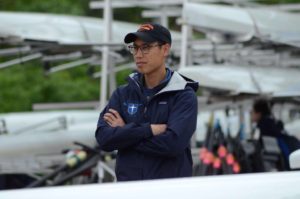 “Coach Randy Dam was our new coach this year. Being a freshman last year, I didn’t really get a chance to be coached by Mr. Fife, but after seeing our varsity team exceed expectations every consecutive year, I was very sad to hear about his departure. Between freshman and sophomore year, I was able to participate in the camp run by Coach Dam that took us and the Dallas United team to Cincinnati to race. That summer and this whole year have only affirmed my belief in his amazing coaching capacity and why he is respected so highly by the rowing community. Though I was upset Coach Fife was leaving, there is no one else I would have rather have filled his place than Coach Dam.”

The Jesuit Ranger Crew Team will be closing out their season at the US Rowing Youth Nationals from June 8-10. Jesuit will be sending the varsity eight boat and varsity four shells to Lake Natoma in Gold River, California for the national regatta. Stay tuned to the Ranger’s Twitter Page and the Roundup for more exciting news on the Jesuit Crew Team.