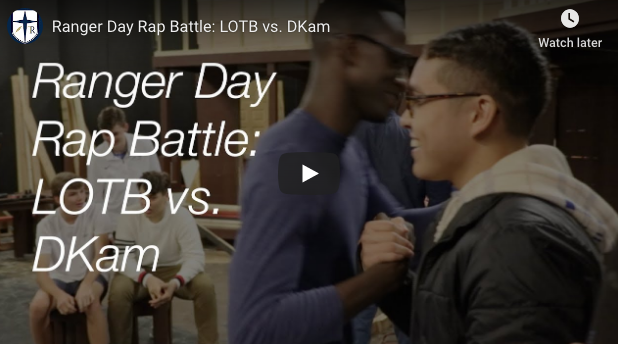 DISCLAIMER: THE STUDENTS AND FACULTY INVOLVED IN THIS RAP BATTLE COMPETED FOR FUN AND ENTERTAINMENT. NOTHING SAID WAS OF SERIOUS VERBAL ABUSE

Hyped students flood into the theater, buzzing about a “rap battle” they heard about throughout the hallways during the week. “Who’s DKam and who’s LOTB?” the students ponder as they enter the 2nd-floor entrance of the theatre.

“Sorry we can’t have students sitting in the aisles,” Mr. Billingham announced as the overpopulated theatre begins to settle down. DKam, or Mr. Kamara as he is known as by his biology students, goes through lyrics in his head, assuring himself that the words will match the flow and melody of the instrumental.

On the other side of the stage, LOTB, or Alex Rivera ’20, similarly goes over the lyrics written on his phone. Wondering if his preparation will have been enough for the infamous DKam? Mr. Kbrom Yohannes, moderator of the Hip-Hop Appreciation club, silences the eager crowd of students and introduces our entertainers to this “secret” performance of Ranger Day 2018.

As a background to the “rap beef” between DKam and LOTB, the rappers have constantly verbally attacked each other and have had previous underground rap battles that have remained under the radar, until now.

Mr. Yohannes introduces DKam, who receives intense encouragement from his freshmen, while I, Ermias Belay, introduce LOTB, who likewise receives a lot of support from his junior classmates. As a sign of experience and confidence, DKam offers to go first and show LOTB how it’s done. DKam signals his MC, Will Eades ’20, to play the instrumental, which to everyone’s surprise is a classic, mellow R&B-type beat.

This is a surprise because, in most rap battles, the beat is usually the complete opposite. Regardless, the judges instruct DKam that the time has come for him to “flame” LOTB.

DKam remains cool, calm, and collected throughout the first part of his presentation. However, DKam suddenly prompts his MC to halt the music, in an effort to demonstrate his ability to rap acapella, without sound in the background (also called free-styling). For rappers in the modern era, rapping acapella has proven to be a difficult task, but a true lyricist is certainly capable of doing this. DKam begins his acapella verse by attesting to LOTB’s characteristics in which he is known to overemphasize. DKam’s notable roasts include placing LOTB’s raps in the trash and changing his name from Rivera to Romo due to his failure to produce. How can Rivera ever return from such a degrading roast?

One last glance at his phone before LOTB prompts his MC, Matt Davis ’20, to play his instrumental. Similar to DKam, the beat was a surprise due to the stunning beat change mid-instrumental. The beat change allows the audience and judges to stay interested and pay attention to the rapper’s ability to catch the flow of the beat as it shifts, as demonstrated by famous artists Travis Scott and Drake on their song SICKO MODE.

Rivera began his rap at the start of the beat switch. LOTB’s pre-written rap shows his lack of freestyle but will this cause him to lose? Out of nowhere, LOTB may have dropped the best lines of 2018 with, “I am the student and you are the faculty, so don’t be comin’ after me, I’m payin’ yo’ salary!”

With these 19 words, the theatre erupted with screaming teenage boys, approaching insanity due to the level of disrespect LOTB’s line generated. As teachers, DKam and Mr. Yohannes stood, jaws dropped and eyes widened. After a couple minutes of awe and bewilderment, LOTB lost track of where he was in the beat and the pre-written raps that he had to restart, causing students to grow impatient with LOTB’s ability to improvise with his lyrics.

After finishing his rap, the judges, Will Kelton ’20, Nate Gomez ’20, Mr. Yohannes, Ms. Tanyika Carter, and I, gathered in a circle to discuss the winner of the battle. Mr. Yohannes insisted that the winner of most rap battles is the rapper who had the hottest line, in which the judges all at once made their decision: LOTB was the winner!

Although DKam had the better overall song and flow, LOTB had the “hottest bar,” thus making him the winner of the first ever Jesuit Hip-Hop Appreciation Rap Battle. Due to the amazing turnout of the battle, the Hip-Hop Appreciation club has decided more rap battles will be coming soon so make sure you attend the next one, which will be scheduled sometime later this month.

Additionally and most importantly, I would like to personally thank the competitors, faculty, judges, and cameraman Silas Hartman ’20, for the amazing success on the rap battle. Check out Silas’ incredible video with stellar audio and camerawork of the entire rap battle which is currently on Youtube under The Roundup’s channel.