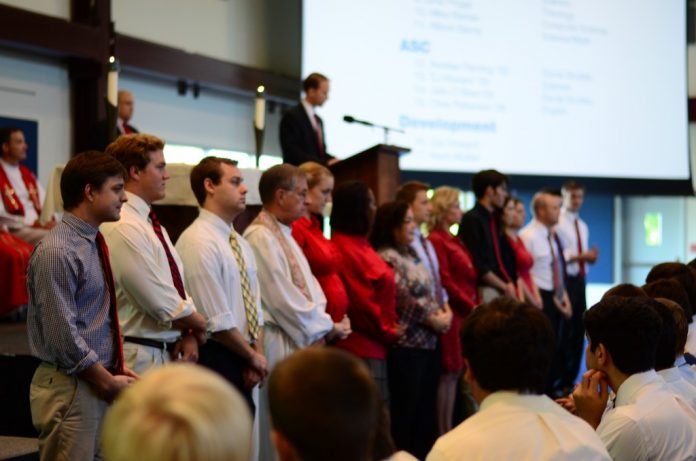 The Alumni Service Corps (ASC), formed in 2009, grants Jesuit alumni the privilege of giving back to their community as a way showing thanks for their Jesuit education. This volunteer program is a once-in-a-lifetime opportunity that allows graduates to dedicate a year of service after their final year of college. A variety of Jesuit high schools throughout the nation offer chapters in the ASC program, as well as the gratifying relationship that develops benefits the entire community.

Members of the ASC are given the chance to mentor, teach, and contribute to extracurricular activities at Jesuit College Prep. Because of the profound impact on the participants’ lives, many ASC members continue to work at Jesuit after their terms come to an end.

This year’s participants, graduates of the class of 2008, include T.J. Howard, Chris Patterson, Andrew Flemming, and James O’Brien. These alumni have generously blessed Jesuit in volunteering an entire year of their lives to service and sacrifice in the name of their alma matter.

Mr. Howard, a recent graduate of TCU, carries out his service to the school by teaching Physics to juniors. Mr. Howard says that although he was previously unfamiliar with the ASC program, he thought it to be “a great opportunity, something that only comes around once,” and was determined not to miss out on his chance to take part in it.

Mr. Howard says that although the ASC has presented challenges, such as “doing something different everyday that [he] hasn’t really done a whole lot of before,” it also has its awards, which include “being back at Jesuit” and “working with the faculty that [he] had as a student.” Regarding the Jesuit profile, Mr. Howard states that “those ideals, which may have gotten lost or not thought about after being gone for a few years, come right back with the return to Jesuit.” Mr. Howard is known for his fun personality and his ability to relate to the students when teaching difficult topics.

After his service in the ASC, Mr. Howard plans to either attend physical therapy school or continue teaching.

Mr. Patterson, a graduate from Ole Miss, volunteers his service in the ASC by teaching sophomore English. After learning about the program, he decided to take part in it because he “has always had an interest in teaching.” In addition, Mr. Patterson believed that the experience would also be “a great way to come back and really connect with everyone.”

Since the start of the school year, Mr. Patterson observed that “although the Jesuit campus is different, the spirit definitely remains the same.” He states that the only thing that has changed is “his perception of Jesuit, because he now has a bigger picture of everything that goes into making it what it is.” Reflecting on his current experiences in the ASC, Mr. Patterson exclaims that the program has “certainly exceeded his expectations, because it’s so much more than just coming back and teaching for a year.” Mr. Patterson’s students describe him as an excellent teacher with a talent for making class interesting.

After his term has ended, Mr. Patterson would like to either continue teaching, or return to graduate school.

Mr. Fleming, a former student at Michigan State University, fulfills his commitment to the program by teaching sophomore World History. He states that after being contacted about the ASC, he was “at first a little hesitant to become involved,” but after speaking with his former employer, he concluded that “the program is a great opportunity to reflect on the journey through life.” Mr. Fleming resolved not to miss out on this once in a lifetime opportunity to participate.

Although we are only a month into the school year, Mr. Fleming’s relationships with the faculty members have undergone “a huge transformation.” He explained that his fellow teachers immediately “allowed him to seamlessly translate from student to coworker.” In regards to this transformation, Mr. Fleming said that the most difficult part of teaching this year has been “the temptation to just cut loose and have fun in the classroom, because sometimes [he] is so eager to build a good relationship with the students, that it is somewhat difficult to stay on track with the material.” Mr. Fleming is loved by his students for his thoughtful personality and his skill in explaining difficult topics.

After his term ends, Mr. Flemming will decide between pursuing a degree in law school and obtaining a master’s degree in economics.

Finally, the last member of Jesuit’s ASC program is Mr. O’Brien, a graduate of Boston College who carries out his pledge to the community by teaching sophomore World History. He applied for a spot in the program because “[he] had always considered being a teacher and was interested in coming back to Jesuit.” After receiving news of his acceptance, Mr. O’Brien was “encouraged by a college professor to participate,” persuading him to take advantage of this once-in-a-lifetime opportunity.

Mr. O’Brien admits that the ASC has already presented several challenges, saying that “the various commitments and activities are sometimes difficult to manage,” but at the same time, the ASC offers rewards, allowing the participants to “become better acquainted with the students.” Mr. O’Brien also says that the ASC program has further progressed his evaluation and application of the Jesuit profile. He states that “having to teach the Jesuit ideals has helped [him] gain a deeper understanding of their meanings.” Mr. O’Brien’s students know him for being energetic, and they also appreciate his ability to relate with them.

Mr. O’Brien has yet to decide on a career, but he will use the ASC program for guidance in choosing his career.

Although the school year has only just begun, the new ASC members already possess a feel for the program, and they all have adjusted to their routines. As the year progresses, Mr. Patterson, Mr. Flemming, Mr. Howard, and Mr. O’Brien will continue to grow as they fulfill their commitment to the Jesuit community.